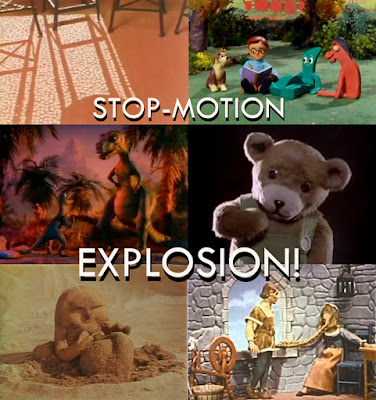 Oddball Films and curator Kat Shuchter bring you Stop-Motion Explosion!, a program of mind-blowing stop-motion animation from the 1950s to the 1980s. In a world saturated with CGI, Oddball Films opens the vaults to celebrate when historical, fantastical and anthropomorphic creatures were hand-sculpted and manipulated into “life.”  This program features stop-motion heavy-hitters Ray Harryhausen, Art Clokey, Co Hoedeman, Bretislav Pojar, Jane Aaron, and Istvan Imre with tons of new finds and a few all-time favorites. Gumby and the gang make a spectacle of a pair of glasses in Art Clokey's Dopey Nopey (1956).  Then Gumby must retrieve a coin from a psychedelic world of fun-house mirrors in Mirrorland (1957). Practical-special effects legend Ray Harryhausen gives us a sweet puppet version of The Story of Rapunzel (1951). Bretislav Pojar's Nightangel (1986), made for the National Film Board of Canada combines stop-motion with breathtaking pinscreen animation to create an ethereal dream world. Another NFB treasure, Co Hoedeman's Oscar-winner The Sand Castle (1977) takes a trip to the beach and creates a magical land of ridiculous sand creatures. Jane Aaron's breathtaking short short Traveling Light (1985) utilizes tiny scraps of paper to simulate sunlight pouring in through a window. In the rarest film of the night, Bill Has A Hundred Faces (1967) Hungarian animator Istvan Imre brings us a delightful romance between two billiard balls. The beloved children's book Corduroy (1984) comes to life in mixed-animation with a living stuffed bear. A hammer, nails and wrenches have a dance party in the George Pal-produced Toolbox Ballet (1971).  One caveman evolves with the help of some dino pals in Stanley and the Dinosaurs (1989).  Plus more surprises for the early birds!  It's a night one million minute movements in the making! 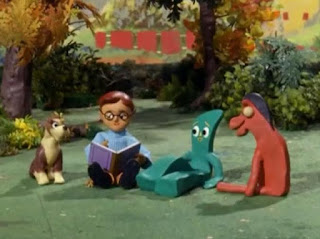 Dopey Nopey (Color, 1956)
A little boy loses his glasses and Pokey picks them up, hoping that they will make him smarter, despite Gumby's objections.  When the puppy Nopey gets hold of the coveted spectacles, four-eyed hilarity ensues. Print on generous loan from Carl Martin.

Gumby's mother entrusts him to pick up the groceries with a coin as big as several weeks worth of allowance. When Gumby loses the coin, he's got to hunt it down through a series of fun-house mirrors that lead to alternate universes and stretched out alternate Gumbys.  Print on loan from Carl Martin. 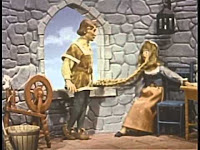 The Story of Rapunzel (Color, 1951)
This tale of enchanted love, loss and hair growth is brought to life with wonderful puppetry animation from the great special effects wizard Ray Harryhausen.

Nightangel (Color, 1986)
A seamless blend of puppet animation and the pinscreen technique is used in this evocative, romantic story by Břetislav Pojar of a man's obsession with a mysterious and benign spirit. When tragedy befalls him, he finds refuge in the love this nightangel has shown him. Winner of the L.A. Film Critics Award.

The Sand Castle (Color, 1977)
An Oscar-winning animated film utilizing clay and sand.  A funny little sand man emerges from a dune and slides around.  He creates another little man out of sand and a small creature.  They find more creatures and decide to work together on building a big sand castle.  Once they are done, they all dance around together.  Then, the wind starts to pick up and sand starts to blow in, destroying all their hard work.  Brought to you by the National Film Board of Canada and director Co Hoedeman and winner of 22 international awards. 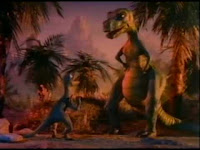 Stanley and the Dinosaurs (Color, 1989)
Stanley the caveman lives with his kind in a cave.  One day, he decides to befriend a bunch of dinosaurs who help him to build the very first house.

Corduroy (Color, 1984)
The beloved children's book comes to life with the help of an adorable stop-motion bear who decides to tour the mall in search of the missing button from his overalls.  Will he make it back to the toy department in time to be chosen by a little girl for Christmas, or will the slightly-irregular stuffed friend get left behind again?

Traveling Light (Color, 1985)
"I definitely do have a passion for light. It’s a very emotional thing. Light is thrilling for me."
- Jane Aaron

Fascinating and beautiful film from the innovative Jane Aaron who recently passed away in June.  Utilizing tiny scraps of paper, Aaron mimics the light from windows traveling across her house and furniture.  Featuring music by Steely Dan's Donald Fagen. 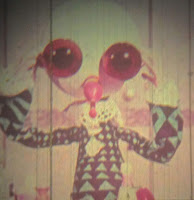 Bill Has A Hundred Faces (Color, 1969)
An incredibly rare and delightful puppet film from the Hungarian animation house Pannonia Film Studio and Istvan Imre - one of the first Hungarian animators to use puppets.  The story begins on a billiard table with two balls in love.  When a rival ball aggressively attempts to woo the lady away from her lover, our hero (Bill) retreats "back-stage" and fools his evil rival with a succession of ridiculous outfits and masks.  Once free of the competition, Bill seeks out a body for his lady love and the two reunite passionately. 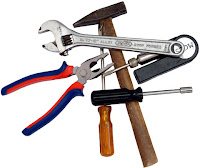