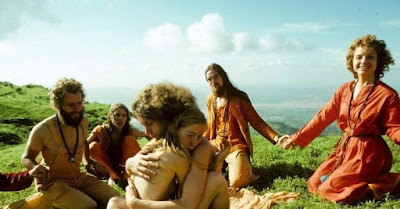 Due to popular demand, Oddball Films is teaming up with author and historian Erik Davis to present a second screening of The Holy Haight: How the 60s Counterculture Changed American Religion Forever at the Roxie Theater on July 26th at 7:00 PM. If you missed it at Oddball in May, come out for a second chance to celebrate the 50th anniversary of the Summer of Love with us!

Davis will draw on a kaleidoscopic array of clips from our vast archive of 60s and 70s era stock footage, amateur films, home movies, documentaries and experimental films. James Whitney's celebrated visionary short Lapis will get us in the mood for a spiritual carnival ranging from Dionysian Acid Tests to Alan Watts' Zen, Jesus Freaks to Satanic Masses, rock star gurus to Pentagon marches, Sufi Dances to Jewish Renewal hoedowns. From celebrity yoga to corporate mindfulness to today's psychedelic Renaissance, we continue to live in the shadow of the hippie mystics. Come catch some of the old sunshine!