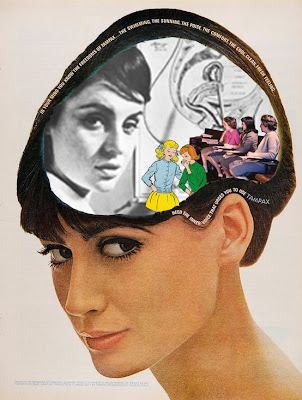 Oddball Films and curator Kat Shuchter present Learn Your Lesson Girls - Shockucational Shorts for the Ladies, the second in a series of programs highlighting the most ridiculous, insane and camptastic shockucational films and TV specials of the collection. This second helping is all about the girls; from predators to puberty, hitchhiking to hairstyling and a lot of uncomfortable and hilarious places in between!  Learn how to be a popular young lady and not a cheap slut in the antiquated etiquette primer Are You Popular? (1947).  Girls Beware (1961) teaches us you don't need Dateline to catch a predator, you just need to keep your guard up and your eyes peeled and the knee-slapping Self-Defense for Girls (1969) gives us the moves to turn the tables on an attacker (after your attacker becomes your instructor all of a sudden).  Judy Blume's classic of pre-teen awkwardness and overcoming your fears comes to life in the ABC Weekend Special Otherwise Known as Sheila the Great(1991). A girl's first period is an emotional time, full of questions, peer-pressure and making out with smiley-faced pillows in Dear Diary: A Film About Female Puberty (1981).  Plus! one girl plays "The Fat Game", three girls sing "The Itty-Bitty Titty Committee," Trailers, Commercials and for the early birds; Cindy's friends have all gone off to exciting careers as secretaries and teachers, will she find her own way with Beauty for a Career (1962)? Will these girls ever learn their lesson?  Will you? 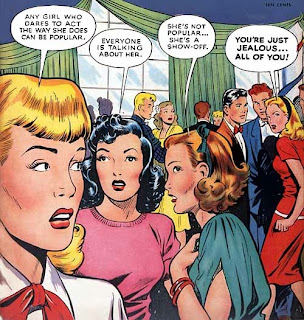 Are You Popular? (B+W, 1947)
Watch misplaced gender roles in this all-time favorite “mental hygiene” howler. Teen girls (who are portrayed as either princesses or sluts) must "repay" boys for entertaining them with milk and  cookies, and are complimented on their observance of social graces. "Look at you, all ready and right on time too; that's a good deal," says Wally to Caroline. 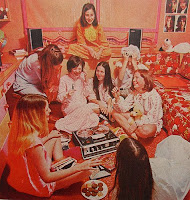 Otherwise Known as Sheila the Great (Color, 1991)
Judy Blume's novel comes to life, courtesy of director (and her husband) Lawrence Blume. An ABC Weekend Special, this adaptation penned by Judy herself features a girl who's all bark, but afraid of dogs. She is dreading a summer vacation neighboring a pooch and learning to swim, but after a slumber party/slam book debacle, maybe she'll learn to face her fears, learn a few things about life and have some fun after all.

Self-Defense for Girls (Color, 1969)
A screamingly funny, over-the top training film for teen girls. We begin with some terrifying situations for our young heroines, accompanied by slow-motion, exaggerated horror music and some incredible over and underacting. Then, as we are exploring the terrors of the home invasion, the perp suddenly becomes our teacher (accompanied by a Jerri Blank look-alike), and we learn how to take control of any situation!

Girls Beware (Color, 1961)
Adapted from a Sid Davis-shocker, this treat will teach you to keep your eyes out for predators. Awareness that sexual attacks exist is seen as a responsibility of growing up. Helps girls develop that awareness by showing typical situations that lead to danger and shows how to avoid them. From misplaced trust in a stranger to failure to follow safety precautions in a baby-sitting job to problems with someone already well known and trusted, four dramatized stories alert girls / young women to early danger signals in situations that go beyond the more common dangers of hitchhiking or walking alone at night. Concludes with the importance of reporting incidents to responsible adults.

For the Early Birds!
Beauty for a Career (Color,1962)
Cindy is sad, she's all alone now that her best girlfriends have all left town after graduation to study in their chosen fields (you know, secretarial and teaching of course).  But Cindy doesn't have a career path, just a great hairdo.  That is until Cindy meets with an older friend who's having a fabulous time in Beauty School.  Suddenly, the path becomes clear, and Cindy enrolls the very next day.  See what she learns to make every woman as beautiful as she can.


Kat Shuchter is a graduate of UC Berkeley in Film Studies. She is a filmmaker, artist and esoteric film hoarder. She has helped program shows at the PFA, The Nuart and Cinefamily at the Silent Movie Theater and was crowned “Found Footage Queen” of Los Angeles, 2009.
Email ThisBlogThis!Share to TwitterShare to FacebookShare to Pinterest
Newer Post Older Post Home