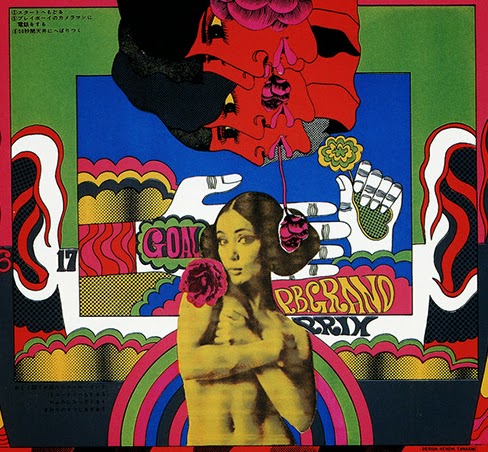 Oddball Films presents Strange Sinema, a monthly screening of rare films, new finds and offbeat oddities from Oddball Films’ vast collection of 16mm film prints. Drawing on his archive of over 50,000 films, Oddball Films director Stephen Parr has complied his 78th program of classic, strange, offbeat and unusual films. This installment, Strange Sinema 78: East Meets West- Experiments in Cinema is a compendium of Eastern made and influenced animated, experimental and avant-garde films influenced by Japan, India, Persia and all parts East. These rare films use traditional animation techniques while others, like computer art pioneers John Whitney use early IBM aided computers to craft their work. While the methodology and techniques differ widely, themes of cultural mythology, spirituality, higher consciousness and morality permeate all these shorts. Many are whimsical, others are deeply conscious; expanding in their structure and themes. To anchor our program we are screening a selection of Whitney films featuring motion graphics pioneer John Whitney Sr., brother James and son Michael Whitney’s work; all profoundly audacious and inspiring in their fluidity and motion and spiritual subtext. Films include Tanka (1976), David LeBrun’s pulsating, optically printed insight into Tibetan scroll paintings; Arabesque (1975), John Whitney’s masterpiece of shimmering, oscillating waves set to the music of Persian composer Maroocheher Sadeghi; Binary Bit Patterns (1969) Michael Whitney’s hypnotic, psych-folk audiovisual experience that suggests a secret symbiosis between the digital and the organic as various Eastern graphic permutations appear, dissolve and undergo metamorphoses on the screen; Lapis (1965) made by a spiritualized James Whitney (one of only 7 films he created) and one of the most accessible "experimental films" ever made; A Chairy Tale (1957) by National Film Board of Canada founder and stop-motion genius Norman McLaren’s brilliant, acrobatic tour-de-force about a man and a stubborn chair with soundscore by sitar maestro Ravi Shankar; The Rolling Rice Ball (1965) a whimsical puppet animation featuring from Japan featuring mochi pounding mice(!); The Magic Horse (1953), Lotte Reiniger’s condensed version of her internationally successful cut-out animated film The Adventures of Prince Achmed  about a magician who comes to the court of the Caliph of Baghad to demonstrate his invention-a magical flying horse; Tara the Stonecutter (1955), British filmmaker John David Wilson’s masterful rendering of a Japanese folktale about desire and power through a visual combination of Asian inspired drawing techniques and abstract watercolor painting; Spacy (1979) Takashi Ito, one of the leading experimental filmmakers in Japan created 700 continuous still photographs which are re-photographed frame by frame resulting in a vast spaciousness and an dramatic sensation of hypnotic movement; Perspectrum (1974), directed by famed Indian animator Ishu Patel with koto music by Michio Miyagi, this animated short consists of simple geometric forms, as thin and flat as playing cards, arranged that a kaleidoscopic sense of perspective is conveyed; The Ant and the Grasshopper (1967) leave it to the Japanese to interpret the Aesop’s Fable in a bizarre yet charmingly weird way. Plus! preshow cinematic artifacts like Kathakali: Dances of India and Iran. 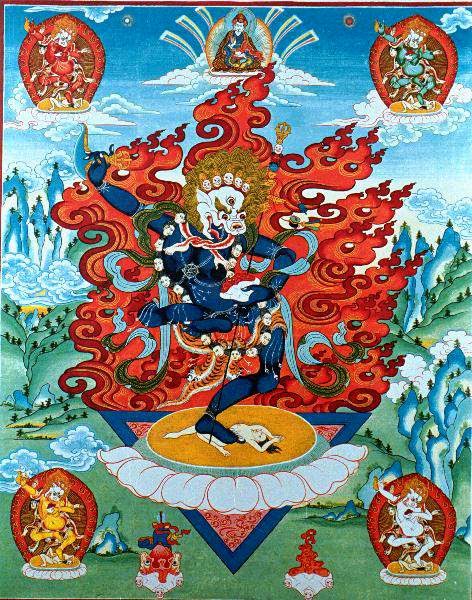 Tanka (1976)
“An Extraordinary Film”-Melinda Wortz, Art News
Tanka means, literally, a thing rolled up. David LeBrun’s Tanka is brilliantly powered by the insight that Tibetan religious paintings are intended to be perceived in constant movement rather than repose. The film, photographed from Tibetan scroll paintings of the sixteenth to nineteenth centuries, is a cyclical vision of ancient gods and demons, wild revels, raging fires and sea battles with monsters-an animated journey through the image world of the “Tibetan Book of the Dead”.  With an  original score by Ashish Khan (sarod), Buddy Arnold (saxophone, clarinet, flute), Pranesh Khan (tablas) and Francisco Lupica (percussion). 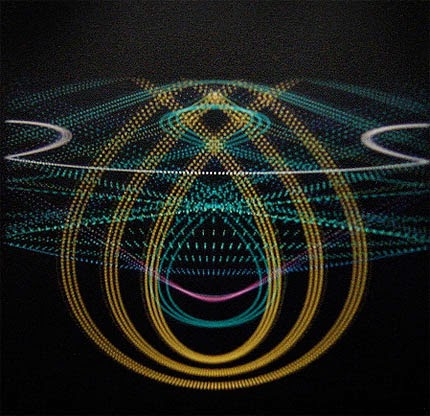 Binary Bit Patterns (Color, 1969)
The spectacular, fast-paced film features quilt-like tapestries of polyhedral and crystalline figures pulsating and multiplying with a kind of universal logic eliciting a hypnotic, trancelike effect from the viewer. This film echoes a preoccupation with the mandala image and the interest in Eastern meditative philosophy that is seen in the work of the whole Whitney family. Employing computer generated imagery with optically introduced color and flicker effects, Michael Whitney creates a hypnotic, psych-folk audiovisual experience that suggests a secret symbiosis between the digital and the organic as various Persian inflected graphic permutations appear, dissolve and undergo metamorphoses on the screen. With original soundscore.

Lapis (Color, 1965)
This film, by film pioneer James Whitney consists entirely of dot patterns. Like a single mandala moving within itself, the particles surge around each other in constant metamorphosis, a serene ecstasy of what Jung calls "individuation." For 10 minutes, a succession of beautiful designs grows incredibly, ever more intricate and astounding; sometimes the black background itself becomes the pattern, when paths are shunned by the moving dots. A voluptuous raga soundtrack by Ravi Shankar perfectly matches the film's flow, and helped to make LAPIS one of the most accessible "experimental films" ever made.
The images were all created with handmade cels, and the rotation of more than one of these cels creates some of the movements. John Whitney Sr. had built a pioneer computerized animation set-up—the prototype for the motion-control systems that later made possible such special effects as the "Star Gate" sequence of 2001. James used that set-up to shoot some of his handmade artwork, since it could ensure accuracy of placement and incremental movement. 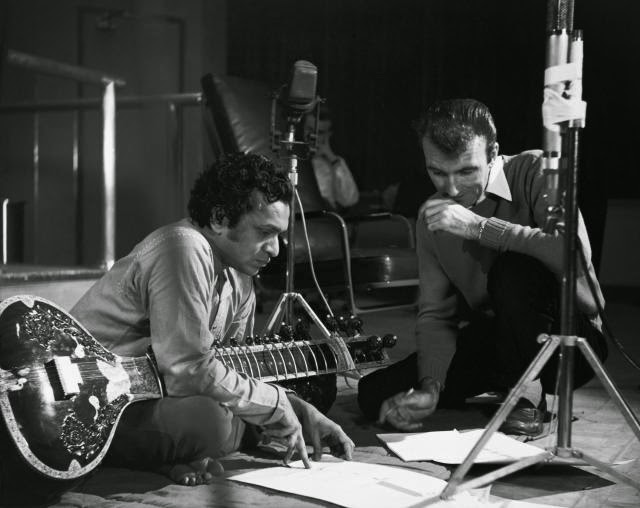 A Chairy Tale (B+W, 1957) w/ Claude Jutra
National Film Board of Canada founder and stop motion genius Norman McLaren’s modern fairy tale, told without words. A chair (animated by Evelyn Lambart) that declines to be sat upon and a young man perform a surrealpas de deux. The musical accompaniment is by sitar virtuoso Ravi Shankar and Chatur Lal. A dizzying display of dance!

The Rolling Rice Ball (Color, 1965, Gakken Films)
Singing and dancing mice! Itty-bitty treasures! Mochi pounding! What more could you want from a stop-motion folktale? When a gentle woodcutter shares his humble lunch with a mouse colony, their magical world opens to him. Boy, do those mice know how to party! Will the good times be undone by a greedy hunter? A classic from Japan.

The Magic Horse (B+W, 1953)
Lotte Reiniger’s condensed version of her internationally successful cut-out animated film The Adventures of Prince Achmed tells the magical story of a magician who comes to the court of the Caliph of Baghad to demonstrate his invention-a magical flying horse.

Tara the Stonecutter (1955, color)
British filmmaker John David Wilson masterfully renders this circular Japanese folktale about desire and power through a visual combination of Asian inspired drawing techniques and abstract watercolor painting.  This is the story of a poor stonecutter who wishes again and again to be more rich and powerful than he is and is granted each desire only to reveal a deeper lesson about greed and the power of perception. 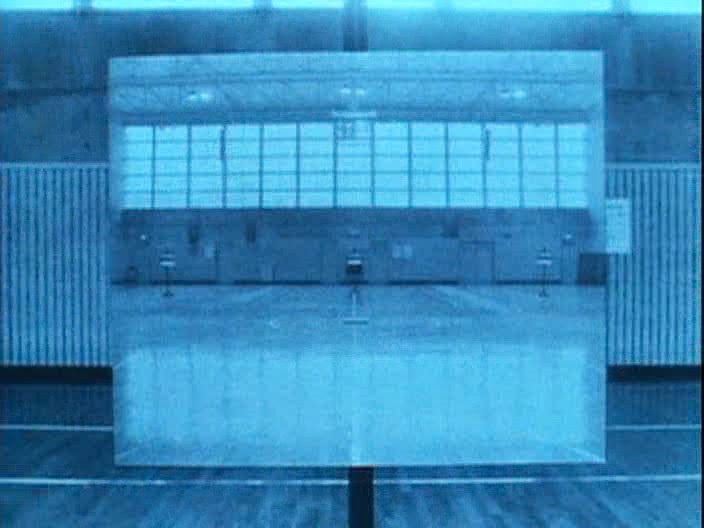 Spacy (Color, 1980-81)
"Film is capable of presenting a unrealistic world as a vivid reality and creating a strange space peculiar to the media. My major intention is to change the ordinary every day life scenes and draw the audience (myself) into a vortex of supernatural illusion by exercising the magic of films." (Takashi Ito, in Image Forum, Oct.1984)

Takashi Ito is one of the leading experimental filmmakers in Japan. He graduated from Art and Technology Department of Kyushu Institute of Design in 1983. Spacey consists of 700 continuous still photographs which are re-photographed frame by frame according to a strict rule where movements go from rectilinear motion to circular and parabola motion, then from horizontal to vertical.
SPACY has vast spaciousness and dramatic sensation of movement and a mesmerizing electronic soundtrack completes this trance-inducing meditation on time and space. 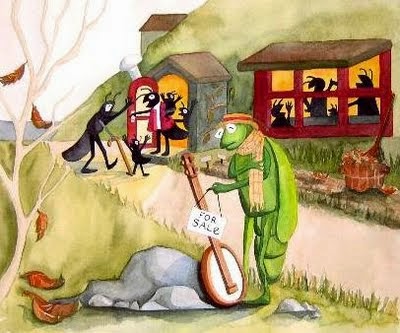