Strange Sinema 88: Groundbreakers of the Avant-Garde with Live Accompaniment by Bohdan Hilash - Fri. May 22nd - 8PM 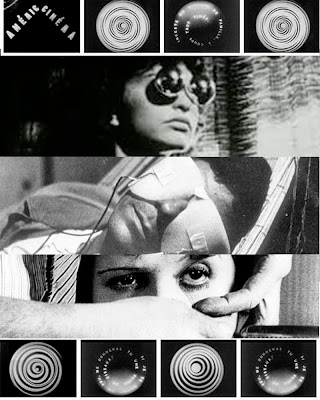 Oddball Films presents Strange Sinema 88: Groundbreakers of the Avant Garde - a once monthly evening of newly discovered and avant-garde rarities from the stacks of the archive. Drawing on his collection of over 50,000 16mm film prints, Oddball Films director Stephen Parr has compiled his 88th program of classic, strange, offbeat and unusual films. This program features a wide array of films focused on groundbreaking, avant-garde and experimental filmmakers and artists that have shocked, thrilled, mesmerized, bored and disrupted conventional cinematic aesthetics. Additionally, selected shorts will be accompanied live by NYC multi- instrumentalist and woodwind player Bohdan Hilash (Meredith Monk). We lay the groundwork for this evening’s strangeness with Marcel Duchamp’s Anemic Cinema (1926), a hypnotic exploration of wordplay intermixed with optical illusions followed by The Life And Death Of 9413: A Hollywood Extra (1927), Robert Florey and Slavko Vorkapich’s legendary masterpiece of low budget art and early Hollywood cynicism, Un Chien Andalou (“The Andalusian Dog”, 1928), Luis Buñuel and Salvador Dalí’s shocking and best-known surrealist films, with the most famous opening scene in cinema history, Buried Treasure (1928), this anonymous (and infamous) erotic curiosity is considered the granddaddy of animated smut, Maya Deren’s A Study in Choreography for the Camera (1945), articulates the potential for transcendence through dance and ritual, while her extraordinary Meshes in the Afternoon (1943), one of the most influential works in American experimental cinema, attunes itself to the unconscious mind caught in a web of dream events that spill over into reality, Merce Cunningham (1964), a very rare French-made poetic montage of movement pioneer Merce Cunningham’s dance performances and collaboration with life partner and sound composer John Cage featuring “found object” sets by radical pop artist Robert Rauschenberg. Finally, we close with Chris Marker’s legendary apocalyptic opus La Jetée (1962), a mind-bending reflection on time, memory, and man at the end of it all and one of the most influential, radical science-fiction films ever made. Plus: A rarely screened NET documentary of seminal pop artist Robert Rauschenberg showcasing a young Rauschenberg’s innovative “Revolvers” or “Combines”- multilayered painted sculptures that expand the boundaries of art.


Anemic Cinema (B+W, 1926, Silent)
Directed by Marcel Duchamp
“I have forced myself to contradict myself in order to avoid conforming to my own taste.”
-Marcel Duchamp 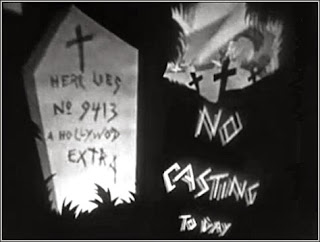 The Life And Death Of 9413: A Hollywood Extra (B+W, 1927, Slient)
Written, produced and directed by Robert Florey and Slavko Vorkapich.
Photographed by Slavko Vorkapich and Gregg Toland.

"This avant-garde experimental short was shot largely in Vorkapich's kitchen using cut-out miniatures; it is a masterpiece of low budget art and a timepiece of Hollywood cynicism."
- Pacific Film Archive

A satiric fantasy about a man who wants to become a Hollywood star, suffers, dies and ascends to heaven.  Slavko Vorkapich, later renowned for his montage work on such films as Mr. Smith goes to Washington, directed the film and designed the sets under the influence of German Expressionism. Gregg Toland, who later photographed Citizen Kane, assisted Vorkapich in shooting.  Robert Florey, who wrote the screenplay for Frankenstein and directed Coconuts and Beast With Five Fingers, co-directed with Vorkapich from their own screenplay. 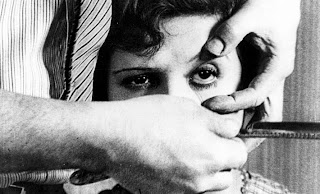 Made in France by the brilliant Spanish director Luis Buñuel and the Spanish artist Salvador Dalí. Un Chien Andalou is one of the best-known surrealist films of the avant-garde movement of the 1920s. It uses dream logic that can be described in terms of then-popular Freudian free association, presenting a series of tenuously related scenes that attempt to shock the viewer's inner psyche. Its opening scene is one of the most famous in cinema history. 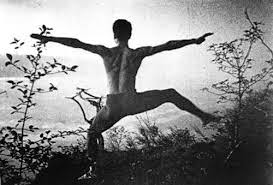 Maya Deren was one of the most important avant-garde filmmakers of the 20th century working and spending time with such artists as Marcel Duchamp, Andre Breton, John Cage and Anaïs Nin. In A Study in Choreography Maya Deren's 16mm Bolex becomes a performer equal in significance to the star of this film, Talley Beattey. In the opening sequence Deren's camera rotates more than 360 degrees, scanning past the figure in movement. In this film Deren articulates the potential for transcendence through dance and ritual. Deren writes, “The movement of the dancer creates a geography that never was. With a turn of the foot, he makes neighbors of distant places” -Wendy Haslem 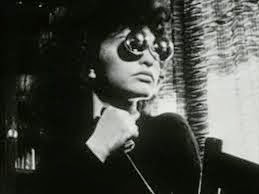 Meshes of the Afternoon (B +W, 1943)
One of the most influential works in American experimental cinema. Maya Deren's non-narrative work been identified as a key example of the "trance film," in which a protagonist appears in a dreamlike state, and where the camera conveys his or her subjective focus. The central figure in Meshes of the Afternoon, played by Deren, is attuned to her unconscious mind and caught in a web of dream events that spill over into reality. Symbolic objects, such as a key and a knife, recur throughout the film; events are open-ended and interrupted. Deren explained that she wanted "to put on film the feeling which a human being experiences about an incident, rather than to record the incident accurately." (MoMA) 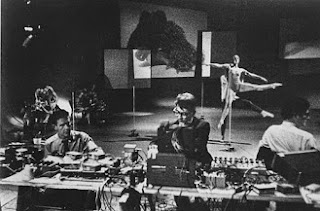 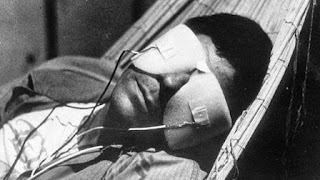 La Jetée (B+W, 1963)
In this legendary exploration of alternative narrative form, time, and space, Chris Marker’s apocalyptic opus weaves together a complex plot with evocative cinematography.  Set in a future Paris following an apocalyptic world war, the film’s main character is one of a group of underground survivors who is being used to travel backwards and forwards through time to search for a way out of the bleak present.
Composed mostly of still photography and narration, the film tells the story of a man whose mind is scoured by mad scientists for a psychic link to the world before its end. Marker’s La Jetée is one of the most influential, radical science-fiction films ever made, a tale of time travel told in still images. 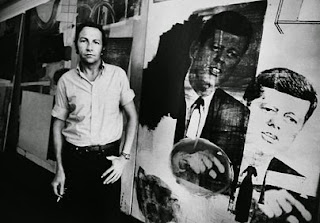 USA: Artists: Robert Rauschenberg (B+W, 1966)
A fascinating portrait of Robert Rauschenberg, one of the forerunners of Pop Art and one of the most influential artists of the 20th century. Rauschenberg’s legendary explorations into painting, mixed media, theater, performance art and costume design influenced generations of artists and together with Pop artists like Jasper Johns, collaborators like composer John Cage and dancer/choreographer Merce Cunningham stretched and redefined the boundaries of the American art. From his patricidal “Erased DeKooning”* work to his co-founding of (E.A.T.) Experiments in Art and Technology in 1966, (formed as a collaborative link between artists and engineers), to his pioneering “combine paintings” using revolving discs to his work incorporating found objects and photo silkscreened images, Rauschenberg’s work is legendary. 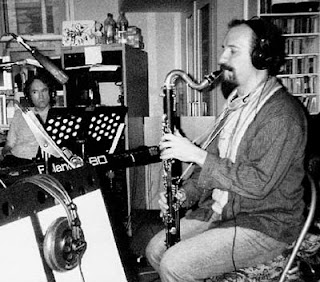 About Musician Bohdan Hilash
Clarinetist and multi-instrumentalist Bohdan Hilash has performed on four continents throughout the world as a performer of orchestral and chamber music, opera, contemporary music, jazz, musical theatre, and as a soloist. Mr. Hilash has appeared as a chamber and orchestral musician and as a soloist at many of the world's pre-eminent concert venues and music festivals including those of Bayreuth, Spoleto, Tokyo, Evian, Lincoln Center, Rome, and Aspen.
As an orchestral musician, Mr. Hilash has performed with some of the world's leading orchestras including the London Symphony Orchestra and the New York Philharmonic with conductors including Leonard Bernstein, Kurt Masur, Zubin Mehta, and Leonard Slatkin among many others. He is particularly active in the field of contemporary music and has worked with many of its leading practitioners including Speculum Musicae, Bang on a Can, and the Chamber Music Society of Lincoln Center. He has performed with jazz artists such as Dizzy Gillespie, Phil Woods, Dave Holland, Lee Konitz, and Kenny Wheeler among many others.
In the theatre Mr. Hilash has worked as a featured performer in collaboration with several leading theater companies, playwrights, and directors of the New York stage including Arthur Miller and Lee Breuer. He recently performed in Carter Burwell's Theater of the New Ear with Meryl Streep, Philip Seymour Hoffman, Steve Buscemi and others in sound plays by Joel and Ethan Coen and Charlie Kaufmann.
Mr. Hilash's recordings may be heard on the ECM, Chandos, RCA Victor, CRI, Mode, CBC, Finlandia, RCA, New World, CCNC, TBM, Capstone, and RP labels. 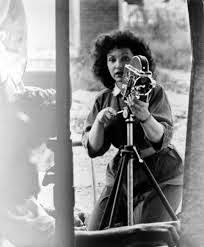 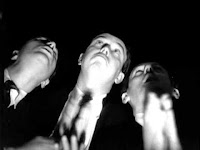