Oddball Films presents Antiquated Sex Education, a program of 16mm sex ed shorts from the 1930s-1950s. These now laughable artifacts from "the good old days" feature an adherence to old-fashioned social mores and cringeworthy outdated medical advice while tackling subjects like teenage sex, puberty, stripping, pregnancy and VD. Check your privates, private in the Navy training film The Pick-Up (1944), starring an unlucky schmuck who picks up a nasty case of the clap just in time for his furlough. Mary and Jeff are just two teenagers in love, but parking and heavy petting just might lead to "guilt, frustration" and an unwanted pregnancy in the mental hygiene short How Much Affection (1957). Stay out of the water, choose your packet of sanitary napkins, and rub yourself with cold cream in the very British puberty primer Growing Girls (1951). Dance along with a large-headed and footless cartoon girl as she learns about the physical and mental aspects of her monthly visitor in Di$ney's notorious Story of Menstruation (1945). Plus, syphilitic excerpts of Oddball favorite The Innocent Party (1959), an unbearably unsexy striptease from Mrs. Elaine Barrymore in How to Undress for your Husband (1937), and Your Body During Adolescence (1956) for the early birds. Everything screened on 16mm film from our stock footage archive. 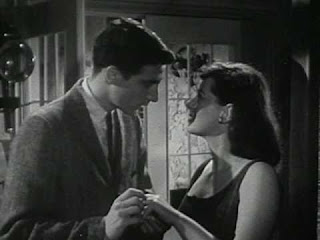 
How Much Affection? (B+W, 1957)
Part of the "Your Marriage and Family Living" series along with Oddball favorites "Is This Love?" and "This Charming Couple".  Mary's date Jeff tries to get handsy with her on their date and Mary's got to learn how to stop things from going too far. Mary is at least in her late twenties (though her character's still in high school) and looks a little like Ingrid Bergman. Her wise mother tells her to watch out for the "guilt and frustration" that comes from heavy petting (not bothering to mention STDs and unwanted pregnancies). At the school newspaper meeting everyone's talking about Eileen and Fred who - after getting pregnant -  have had to drop out of school and rush through a shotgun wedding. Mary and Jeff run into Eileen and her baby who has a heap of lies about her new marriage and tons of pent-up jealousies. Will Mary and Jeff decide to go all the way or just end up eating a sandwich instead? An Oddball premiere!

Growing Girls (B+W, 1951)
Mary is 13 and going through a lot of changes in this very prim and proper British puberty short. Drawing on various farm animal analogies (so as not to step into any taboo subjects) we learn all about getting ready to have babies! Watch as Mary schedules her period, unwraps a delightful present of sanitary pads, and as she burns her soiled pads in the fireplace! The narrator has lots of great tips including not swimming, an obsession against "a chill" and even recommends spreading cold cream on her privates!

The Pick-Up (B+W, 1944)Watch out for loose women at the dance hall, soldier, you might miss your furlough before you ship out!  A WWII army training film on the horrors of venereal disease. Corporal John Green is anxiously awaiting his furlough when he meets a dame he thinks is a "nice girl" until he ends up with with a nasty dose of the clap.  Looks like he'll be heading to the infirmary instead of on vacation! 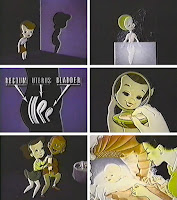 The Story of Menstruation (Color, 1945)A Walt D*sney Production, The Story of Menstruation is an animated short film produced for American schools detailing the menstrual cycle.  Rumored to be the first film with the word “vagina” in it’s screenplay, this vintage gem is both matter of fact and dreamily flowery. A large-headed girl takes you through the dos and don’ts of menses while helpful diagrams guide us all to better understanding.


Oddball's all-time favorite VD film: the guilt-tripped noir-like shocker about a “dirty” girl and her hidden secret- syphilis! A young man goes out on the town with his friend and they park with a couple of loose women.  Later, when he feels something happening downstairs, he's got to face it; he's got the syph.  After a visit to his doctor and some grotesque imagery, he must face the insufferable task of telling his girlfriend - who is already super ashamed at her own deflowering a mere days after his dirty encounter. A cool beatnik-jazz soundtrack highlights this sordid tale produced by the Kansas State Board of Health!

How to Undress in Front of Your Husband (B+W, 1937)
An antiquated exercise in exhibitionism starring Elaine Barrie AKA Mrs. John Barrymore (!) wife of the famed Hollywood legend. No wonder she was his last wife! 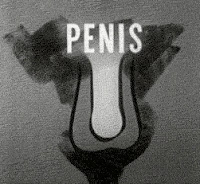 Your Body During Adolescence (B+W, 1956)
A mostly animated account of the changing bodies of boys and girls.

About Oddball Films
Oddball Films is a stock footage company providing offbeat and unusual film footage for feature films like The Nice Guys and Milk, documentaries like The Black Panthers: Vanguard of the Revolution, Silicon Valley, Kurt Cobain: The Montage of Heck, television programs like Transparent and Mythbusters, clips for Boing Boing and web projects around the world.Our screenings are almost exclusively drawn from our collection of over 50,000 16mm prints of animation, commercials, educational films, feature films, movie trailers, medical, industrial military, news out-takes and every genre in between. We’re actively working to present rarely screened genres of cinema as well as avant-garde and ethno-cultural documentaries, which expand the boundaries of cinema. Oddball Films is the largest film archive in Northern California and one of the most unusual private collections in the US. We invite you to join us in our weekly offerings of offbeat cinema.
Email ThisBlogThis!Share to TwitterShare to FacebookShare to Pinterest
Newer Post Older Post Home