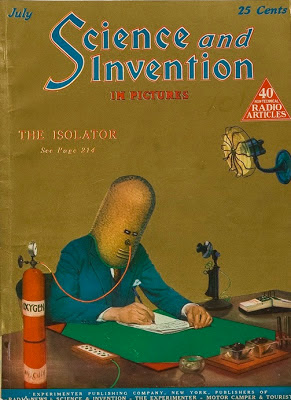 Oddball Films and guest curator Lynn Cursaro present A Brighter Yesterday: Science and Technology of the ‘20s and ‘30s. Using gorgeous educational and mesmerizing promotional films, plus cartoons and sci-fi; we look at the many faces progress between the wars, whether purely scientific or not. Sun Healing (1930s), a jaw-dropping forerunner of the infomercial, pitches an ominous health device that's "safe" to use on your own children. Take a good look at opium with Dream Flowers (1930s) featuring beautiful, meditative microphotography of a cross-section of an opium poppy. Associated Oil promises to Deliver the Goods! (1939) at the 1939 San Francisco World's Fair. Science goes horribly wrong in both the stunning horror classic The Bride of Frankenstein (1935) and the Ub Iwerks Willie Whopper cartoon Reducing Creme (1934).  The gruesome Battle of the Centuries pits ants against termites in a miniature war with maximum action. Basic physical principles are the focus of Invisible Forces (1920s), and the visuals of capillary action in sugarcubes will tantalize and mesmerize. Tree innards are explored in the sugary and contemplative Maple Sugar and Syrup (1920s). Dadaist Marcel Duchamp and Man Ray play with perception in the surreal experimental classic Anémic Cinéma (1926), a visual cacophony of hypnotic puns. You can be assured of purity in both your mass bottled milk with Science in the Creamery (1920s) and your makeup in the kitschy and marvelous Accent on Beauty (1930s).  Plus, the curator will apply baking sciences to supply delicious home-baked pies and treats!

Highlights include:
Sun Healing: The Ultraviolet Way (c. 1930s, B+W)
A Los Angeles firm tried to sell the healing powers of the sun with this sinister-looking hand-held lamp. Trust us, it's safe, requires just minutes each day and it’s great for the whole family! The before-and-after shots and flimsy statistics are bolstered by scenes of ordinary folks gracefully waving the miracle product over themselves and their children. A jaw-dropping must-see parody of itself.

Accent on Beauty (1930s, B+W)
A luscious travelogue! Those bottles and jars filled with the promise of loveliness are a serious business, requiring both big scary machines and delicate hands. Exotic ingredients, precise manufacturing methods and skilled technicians come together to make de luxe miracles for milady's dressing table.

Bride Of Frankenstein  (James Whale, 1935, B+W, excerpts)
The most beautiful horror film of all time! It seems like everything that scares us about science gets the prefix “Franken” added to its name, and why not? The sparking machinery and the flashes of madness are among the highlights in this spine-tingling condensed version, but nothing can steal the spotlight from the monster’s fierce maiden fair.


Invisible Forces/Science in the Creamery (1920s, B+W)
In Invisible Forces, surface tension and capillary action are demonstrated using sugarcubes, soap bubbles and a couple of genuine ordinary people of the 1920s, whose film careers ended here, we’re pretty sure. Even as food distribution methods were scaling up to feed a growing America, the rigorous practices and strange machines of Science in the Creamery assured viewers they could count on sweet, wholesome moo-juice in every bottle, every time.

Reducing Creme (Ub Iwerks, 1934, B+W)
When a jar of a miracle slimming potion falls on Willie Whopper, the world becomes even more perilous in this swinging cartoon treat. Good thing Willie has a plan!


Anemic Cinema (Marcel Duchamp and Man Ray, 1926, B+W, Silent)
“I have forced myself to contradict myself in order to avoid conforming to my own taste.”

The only film to come from the founder of the Dadaism movement (artistic and literary movement from 1916-1923) “Anemic Cinema” is an abstract and annalistic film short containing rotating circles and spirals interlaced with spinning discs of words strung together in elaborate nonsensical French puns.

Dream Flowers (1930s, B+W)
Beautiful time-lapse photography is used illustrate the opium poppy’s life cycle, from eager bud to the gracefully shedding of its bounty of seeds.  Watch as these innocent flowers are processed into “the scourge of the East”, all deliciously narrated in crisp BBC English.

The Battle of the Centuries (1932, B+W)
In this early educational film, we get a front row seat to the fiercest battle one log has ever seen!  We follow the life-cycle of those disgustingly fascinating wood-munchers, termites, up to when they must lay their lives on the line to battle their mortal enemies, marauding bands of hungry ants.  Simultaneously riveting and repellant, this film was produced by Standard Oil not long after the advent of sound.

Deliver the Goods (1939, B+W)
In anticipation of the 1939 Golden Gate Exposition in 1939, the fine people at Associated Petroleum were dreaming of an American West criss-crossed by smoothly purring motors. The wonders of natural beauty are best appreciated by car and the Associated wants to service yours!

Maple Syrup and Sugar  (1930s, B+W)
Even with its exploration of the maple tree’s anatomy and glimpses of a quaintly “modern” processing facility, this selection from Eastman Company's Kodascope lending library is barely a science or an industrial film. As with the best ephemera it captured much more. The primitive maple tapping camps and hardy maple men evoke frontier life with a haunting immediacy. You’ll never look at the sweet golden syrup the same way again.
Plus! For the Early Arrivals!
Manufacturing Beaver Steel Wool (1930’s, black+white)
James H. Rhodes was a steel wool maker to the world, and boy are they proud! The history of steel wool is also recounted in some delightful set pieces that might be cheesy but are never abrasive.
About the Curator
Lynn Cursaro is a local film blogger. Over the past two decades, she has worked in research and administrative positions a variety of Bay Area film organizations. The Castro Theatre’s monthly picture puzzle is of her devising.