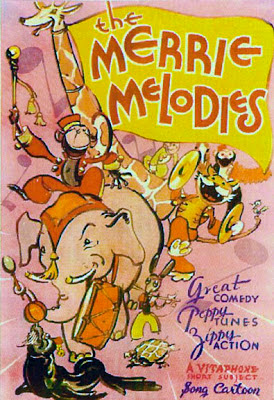 Oddball Films and curators Lynn Cursaro and Kat Shuchter bring you Classic Cartoon Cavalcade, an evening of some of our very favorite classic cartoons hand-picked from the San Francisco Media Archive's massive collection.  From the kooky to the spooky, silly to the sexy with a little Looney Tunes, Merrie Melodies, Tex Avery, Fleischer Brothers, Walt Di$ney and imitators, just to name a few.   Tex Avery brings us a sexy adaptation of an old fairy-tale in Red Hot Red Riding Hood (1943).  Get down with Blame it on the Samba (1948) a mesmerizing Technicolor mix of live action and animation created by Walt D*sney and starring Ethel Smith, the Dinning Sisters and a dizzying array of animated characters.  Mosquitoes go to boot camp in the hilarious send up of War-time newsreels in Of Thee I Sting (1946).  Daffy Duck gets film noirish in The Super Snooper with a femme fatale duck pulling the strings.  We have a double shot of Paul Terry's Terrytoons: the charming silent fable Venus and the Cat (1921) and the ill-fated love story of The Bee and the Butterfly (1932). Merrie Melodies gives us two shots at classic Hollywood with Hollywood Steps Out (1934) and cartoon Bogey and Bacall in the uncensored version of Bacall to Arms (1946). Krazy Kat and his tiny puppy get entangled in skeletal-hilarity in Krazy Spooks (1933). Early Looney Tunes hero Buddy runs the show at Buddy's Theatre (1935). Plus, the world's tiniest elephant in Punch Trunk, an appearance by Betty Boop, and even more surprises than you can handle! 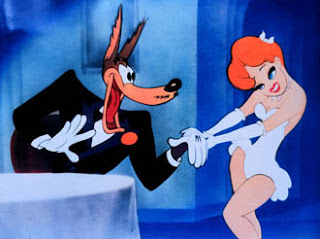 Highlights Include (but not limited to) :


Red Hot Riding Hood (Color, 1943)Tex Avery; MGM; 1943 This sensual adaptation story liberates its characters from their Di$ney-style forest and slaps them in the middle of swanky Manhattan. Grandma's a nymphomaniac swinger, and her rustic cottage home a hip penthouse pad. Little Red has become a red-hot singer-stripper; the Wolf is a model of lupine lechery; and the forest is supplanted by a big-city nightclub as the enchanted place of forbidden sexuality. The Wolf tries to pull the old Red Riding Hood gag in order to meet up with Little Red, but Grandma has other ideas.

Of Thee I Sting (Fritz Freleng, 1946 Color)
Mosquitoes go through an intense and very specific boot camp in this entertaining documentary send up of war effort newsreels of the day. Looney Toons fans will thrill to Robert C. Bruce’s jaunty March of Time style narration.

The Super Snooper (Robert McKimson, 1952, Color)
Hard-Boiled Raymond Chandler Style Toon Action! Private Eye Daffy Duck turns up at the scene of the crime, only to have his every wacky effort to gather clues thwarted by a copper-haired femme fatale. Could this temptress be the guilty party?

Venus and the Cat (Paul Terry, 1921, B+W)
You know how it is, the Goddess of Love floats in her hatchback cloud, just seeing where she can help mere mortals out.  She has strange solution for the domestic squabbles of a crusty farmer and his mischief-making cat: she makes the cat his wife! From American Aesop's Fables Studio. 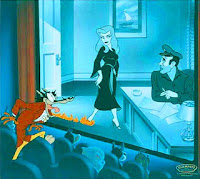 
Krazy Kat jumps back to the screen from the comic strip, (looking a lot like one Mr. M. Mouse) to battle ghosts, skeletons and gorillas in this silly short. Krazy Kat and his sweetheart (with a curiously tiny puppy in tow), head into a haunted house and squeal at everything!  The puppy tangles with a skeleton to adorable and hilarious effect, but when the danger becomes real, will they be able to fight off a Poe-esque twist? 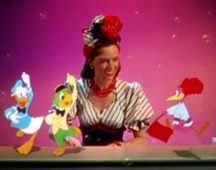 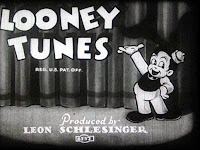 
The forgotten star of Warner Bros. cartoons! Buddy starred in cartoons from 1933 till 1935. This time out, Buddy is the one-man staff of the local movie house. The news reel spoofs will delight fans of both 30’s movies and general kookiness. When his darling Cookie, Warner’s answer to Betty Boop, gets in a spot of trouble, Buddy makes the leap into the silver screen.

The Bee and the Butterfly (B+W, 1932)
This is one ill-fated, but beautiful love affair.  A grouchy bee meets and falls for a beautiful lady butterfly (one who bears striking resemblance to Betty Boop), but an evil spider's not planning on sending them a china set from Pottery Barn for the wedding, he's too interested in eating the entire wedding-party. One of Paul Terry's Terrytoons.