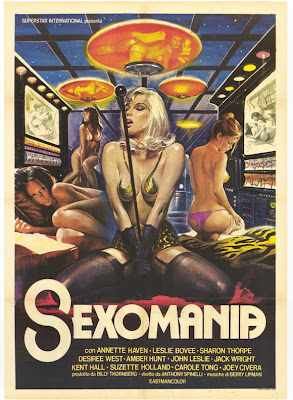 Oddball Films presents Celluloid Sex, a night of vintage stag films, sexperimental shorts, social hygiene primers, bizarre burlesque, sexy trailers, commercials and so much more all from our eclectic archive of 16mm film. In the rare silent stag film On the Beach (1923 AKA Getting His Goat), sexy sirens lure a man to make love through a fence, only he gets more than he bargained for!  Get ready for Eveready Hardon, the well-endowed star of the first pornographic cartoon Buried Treasure (1928) and his raunchy beachside exploits.  Sex and experimental film blend beautifully in Scott Bartlett's Lovemaking (1970) and the bizarre LA Too Much (1968).  Sex-obsessed teens rock out, makeout and learn the secrets of playing The Game (1966). Lili St. Cyr, the one-time Queen of Burlesque, dirty dances her way clean in Bubble Bath Dance(1952). Plus Burlesque Screen Tests and Dancers (1950s), featuring Bunny Spencer’s screen test, a rooftop mambo and a masked dancer with a bowl of fire on her head; Vintage Commercials with Sex Appeal; Sexploitation Trailers, Girlie and Beefcake Reels and even more sexy surprises! 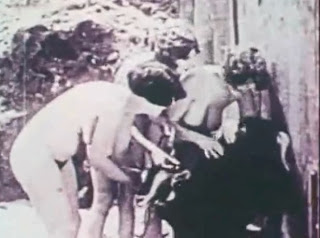 
On the Beach aka Getting His Goat (B+W, 1923)
“Idylwild Beach where the men are idle and the women are wild”
From 1923 here’s one of the earliest stag films ever made starring Creighton Hale (from D.W. Griffith’s “Way Down East”). A man peeps through a knot hole on a group of girls and gets more than he bargained for. 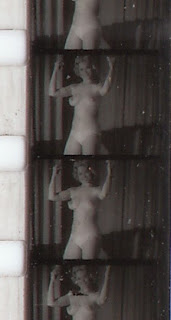 Lovemaking (1970, color)
The famed experimental film by film-pioneer Scott Bartlett. A delicate and arousing treatment of lovemaking. Simple and classic, combining technical mastery and personal restraint. The image is vivid subtle and ambiguous while the sound is sharp and clear. Bartlett's film often form and interaction between film material and photographed image by combing complex analog film effects with film and video images to create a lush colorful, and layered flow optical and auditory information. Bartlett's Lovemaking is an imaginative, suggestive, artistic, non-clinical evocation of the sexual act.

L.A. Too Much (1968, color)
A couple having sex is interposed over shots of the architectural details of a house. Strange noises fill the sound track.  Ultimately the old house succumbs to a violent death. 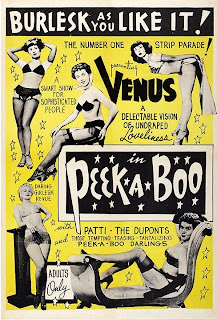 
Watch these “Screen tests” and super-quirky burlesque dancers get way-out and weird. Shorts feature Bunny Spencer modeling the “stockings of tomorrow”, Barbara Nichols doing a Latin Mambo on a rooftop and “Afro-Cuban Genni”, masked and dancing with a bowl of fire on her head. Now that’s burlesque!


Beautify your body with the following commercial products: I Can't Believe It's a Bra "Telephone",  Playtex 18 Hour All in One "You've Lost Weight", 18 Hour Girdle, Story Of Life "Sexual Appeal"  "Airliner" ,  Zest "Mother - Daughter" (whatever that implies), Water Fingers "Home From Work" and many more!

Bubble Bath Dance (B+W, 1952)
Lili St. Cyr was the most influential burlesque dancer in the second half of the 20th century. Her hip-swiveling ways swayed pop-culture sirens from Marilyn Monroe (who copied her style) to Madonna (who bought her famous push up bras) for decades to come. St. Cyr shimmied across the country with inventive routines in posh nightclubs amassing legions of famous fans, including Humphrey Bogart and Ronald Reagan. Her notoriety and fame brought financial and commercial successes, with roles in movies like Howard Hughes' Son of Sinbad and Norman Mailer's The Naked and the Dead.  Here, we see a segment of her infamous Bubble Bath Dance from the film Love Moods.