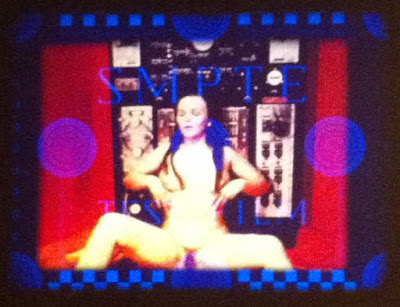 Oddball Films welcomes moving image artist Kerry Laitala to our Cinema Soiree Series, a monthly event featuring visiting authors, filmmakers and curators presenting and sharing cinema insights and films. Kerry Laitala is a media archaeologist who uses analog, digital, and hybrid forms to present traces of forgotten technologies from the distant and recent past. Laitala's work resides at the crossroads of science, art, history, and her uncanny approach to evolving systems of belief through installation, photography, para-cinema, performance, kinetic sculpture, and single-channel forms. Laitala will be revealing the secrets of her direct film manipulation and experimental imaging techniques and presenting two works from her City Luminous Series, celebrating the lighting pioneers that gathered a century ago at the fabulous Jewel City, a 635-acre monument to impermanence constructed, and soon after, demolished in San Francisco’s Marina district. These include The City Luminous: Spectacle of Light, which recently received an audience choice award at the 2015 Crossroads Film Festival presented by SF Cinematheque, and The City Luminous: Electric Salome, a brand-new work being world-premiered right here at Oddball Films. Both of these performances will feature live sound from Oakland’s experimental music duo extraordinaire Voicehandler, made up of Jacob Felix Heule and Danishta Rivero.  In addition, Laitala will screen the slightly salacious The Kali of Technology, and Side Show Spectacle with live sound by Brian Darr. Lastly, 3D manifestations will propel the audience into the screen and beyond the as their retinas get pushed and pulled through the taffy maker of prismatic chromadepth. These works include: Afterimage: A Flicker of Life, sound collaboration Between K. Laitala and Wobbly, Chromatic Frenzy and Nine Lives Measured in Mercury with original sound by Neal Johnson. 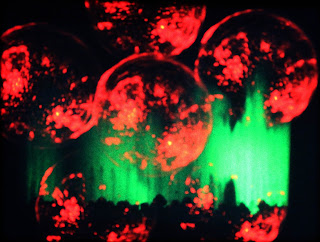 The City Luminous: Spectacle of Light (dual-16mm projector performance, 2015)
In 1915 Walter D'Arcy Ryan induced explosions of color over the night sky as part of the Pan-Pacific International Exposition (PPIE), a presentation the likes of which had never been seen prior, and which became the model for light displays at future World's Fairs and illumination showcases. One hundred years later, Kerry Laitala pays tribute to this historical moment with a dual-projector performance involving archival images of silhouetted spectators of the 1939 New York World’s Fair sharing screen space with sinuous light shapes swirling, twinkling and bouncing across the frame like unbound forces of energy. The City Luminous: Spectacle of Light will be accompanied by a live soundtrack by Voicehandler (Jacob Felix Heule and Danishta Rivero), who manipulate sounds from various sources including a mechanical music box from Switzerland. 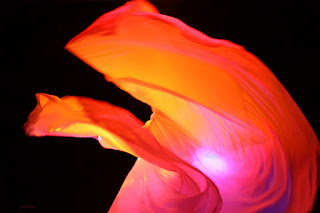 The City Luminous: Electric Salome. (dual-16mm projector performance, 2015 WORLD PREMIERE!)
Loie Fuller was a major innovator in fin-de-siècle dance, costuming and theatrical lighting design. Her Serpentine Dances became hugely popular, inspired dozens of imitators, and are best known today through the early films shot by the likes of W.K.L. Dickson, Alice Guy Blache, Segundo de Chomon, Georges Melies and others. Towards the end of her career Fuller brought her troupe to San Francisco’s PPIE, where they performed under the dome of the Palace of Fine Arts as a fundraiser to allow it to become the only major structure to be saved from destruction at the end of the fair. Laitala filmed San Francisco dancer Jenny Stulberg in the act of resurrecting Fuller’s fluttering aura through her own choreographed interpretations. Then she reproduced Stulberg’s image onto separate film strips which will rejoin together projected onto a phantom presence that brings a sculptural element into the proceedings. Voicehandler provides the sound.

The Kali of Technology (multi-16mm projector performance, 2014)
This brief eye-scorcher involves a minimum of three lubricious loops of 16mm unspooling simultaneously. Named for the multi-armed Hindu deity of destruction, power and time, this Kali will have you hypnotized. 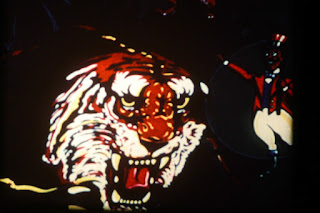 Side Show Spectacle (16mm, 2015)
Step right up, ladybugs and experimentalmen, and see with your very own eyes the unbelievable Kodachrome sensation that has delighted children of all ages! The thrills and spills of the big top, dangerous creatures tamed onto celluloid via colorful images captured while out on safari in exotic El Cerrito. Live musical accompaniment by electronic keyboardist Brian Darr. 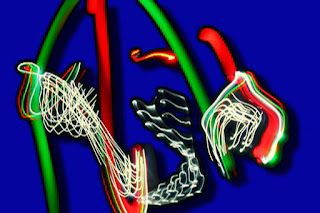 Afterimage: A Flicker of Life (chromadepth 3D video, 2010)
Beginning with an animated wood-cut of a beating heart, Afterimage: A Flicker of Life traces a trajectory of Eadweard Muybridge and Etienne Jules Marey's 19th Century motion studies using iconic representations of artifacts that they left behind. It then takes the viewer into the 21st Century using three dimensional technology. Human beings are reduced to their gestures and movements in space, becoming forms of pure colored light. Afterimage: a Flicker of Life employs graphic tracings to create kinesthetic inscriptions that speak to the physicality of working with the film medium. Just as Marey and Muybridge strove to make motion visible to the naked eye, this archival/live action 16mm-to-digital hybrid takes a whimsical approach to envisaging human and animal locomotion by illuminating the traces of their presence. Soundtrack by Kerry Laitala and Wobbly. 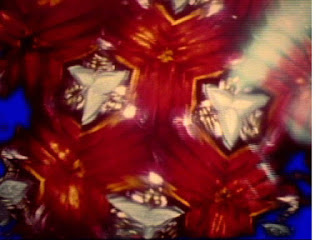 “Chromatic Frenzy is a densely saturated freakout of solar streaks, kaleidoscopic magma globs, and seared disco vortices”…“incandescent images suggest an intergalactic mysticism from out of Harry Smith's sketchpad”…“Truthfully, the film is almost unbearably rapturous even without the effect of the glasses. But with them, there's an additional and unexpected charm that comes through, one that makes gains through the naiveté of the technology’s stunted range. Depth illusions are largely limited to only three planes—just off of, a bit back from, and flush up against the screen—letting all that is frantic become tempered by a sense of welcoming simplicity.” – Blake Williams in MUBI’s Notebook. 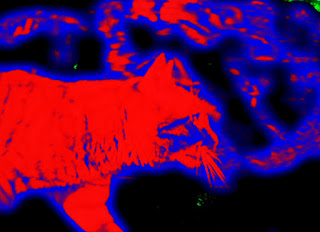 Nine Lives Measured in Mercury (chromadepth 3D video, 2013)
Follow the adventures of the Chroma-Cat as she moves through spectrum-splitting terrain on a quest for answers to the cosmic questions. Might her transmigration be a metaphor for media re-appropriation?
Soundtrack by Neal Johnson.

About Kerry Laitala:
Media archeologist Kerry Laitala is an award-winning moving image artist who uses analog, digital, and hybrid forms to investigate ways in which media influences culture at large. Laitala’s work resides at the intersection between science, technology, and her uncanny approach to evolving systems of belief through installation, photography, performance, kinetic sculpture, and single channel forms. She continues to explore expanded cinema territories to create cinematic sculptures that extend into the space. Laitala teaches film at the San Francisco Art Institute.