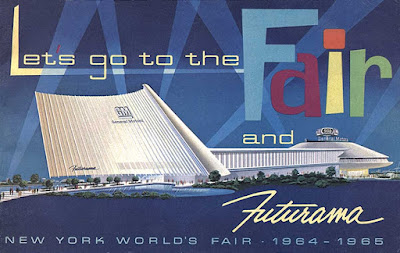 Oddball Films presents Futurama - A Visit to the 1964-1965 World's Fair, a program of vintage films about and commissioned for the New York World's Fair of 1964-1965.  This international spectacle of architecture, commerce, culture, religion and art attracted millions of visitors from around the world. Countries, religions and corporations alike sought to dazzle visitors with glorifications of the past and promises of a brighter future. Tour the fair and witness all the exciting sights and sounds of the 1964 New York World's Fair in campy travelogue To the Fair (1964) including visits to the Uni-sphere (the centerpiece of the fair), the Futurama exhibit, The Vatican pavilion, presentations from exotic countries and more in gorgeous color! From the commercial sector, Ship n' Shore Fashions wants you to see the future of machine-washable clothing with two giggling girls at the fair in Fashion Fair (1964). In Magic Skyway (1965), Ford motorcars commissioned the animatronix team from Di$neyland to create an interactive ride full of dinosaurs, neanderthals and a brief trip back in time to show the past and future of cars. The legendary Saul Bass creates a kaleidoscopic vision of air travel for United Airlines in From Here to There (1964). From the religious sector, we bring you the LDS film that was watched my millions and plays out much like a mental hygiene short, warning viewers of a life of idle and harkening them to the Mormon faith: Man's Search for Happiness (1964). View the controversial film from the Lutheran Council and visionary filmmaker Rolf Forsberg depicting Jesus as a circus clown: Parable (1964).  Early birds will get the inside scoop on the planning of the fair in World's Fair Report with Lowell Thomas (1961) which includes an interview with fair planner Robert Moses and miniature models of many of the pavilions and buildings of the fair. Plus dancing dolphins, Mel Brooks's 2,000 Year Old Man talks about the very first World's Fair and more surprises. Everything screened on 16mm film from the Oddball archive. 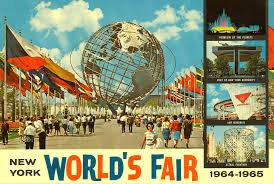 “Practically everyone in the world is coming to the fair!”

Get glimpses at the symbol of the Fair, the great Uni-sphere and its fountains, the Wonderful World of Chevrolet, a show where the audience revolves around the theater, The History of Communications by Bell Communications, countries’ pavilions including Spain, India, Venezuela, Korea, Japan, and Indonesia, The Pieta of The Vatican City (marking the first time a major Michelangelo sculpture traveled to the US), an area for “Parking Children,” the Futurama exhibit, carousels, gondolas, monorails and evening fireworks!

The boy scout troop loses some of its members and the lost ones try frantically to find the troop by attempting to spot the troop from heights and then dizzy chases on amusement park rides. The two college men are attracted to two women and track them down through the various attractions of the fair. Our out of town teachers view exhibits to learn how to teach children some new ideas. And everybody has a great time! 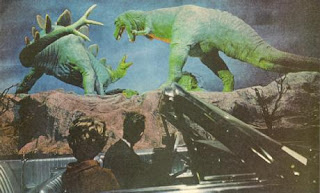 Magic Skyway (Color, 1964)
Ride and product exhibits for the Ford Motor Company’s New York World’s Fair Pavilion The Wide World of Ford. Ford cars drive through a live action diorama with cavemen writing on walls, dinosaurs and automated animals.  Animatronic cavemen - made by the folks over at Di$neyland (where some of the dinosaurs still live on today) - hunt fake animals, paint on walls, and discover the wheel which takes us into "modern day" and beyond with tons of gorgeous futuristic cars on display. 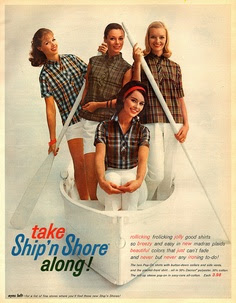 Fashion Fair (Color, 1964, excerpt)
New York-native Jo-Ann shows her Iowa-native cousin Linda around New York for the World’s Fair. The two are excited to go up escalators and explore lavish hotels. They enjoy rides on monorails and have a tea party in the design pavilion.  When they stumble into the Ship n' Shore Fashions tent, they are blown away by all the amazing machine washable clothes that keep them looking sharp. The factory then gives us a demonstration of the many dedicated sets of hands it takes to make the perfect ruffled shirt from the sewing machine to the model. 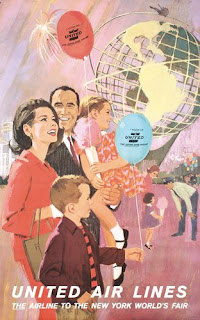 From Here to There (Color, 1964)
Without narration and using quick cuts and odd angles, Saul Bass creates a fast-paced and visually enticing collage of the golden age of air travel. From the airports to the passengers; stunning aerial shots and minute details, this short will take you back in time and across the country like the 1960s jet-setter we all wish we were. Commissioned by United Airlines for their tent.

All in Fun (B+W, 1964, excerpt)
A visit to the New York World's Fair featuring the friendly porpoises starring in the water show at the Florida Pavilion. These intelligent marine mammals perform a variety of tricks for the camera--leaping several times their length above the water, tailwalking, playing basketball, and putting out fires. Flashbacks show how these performers were captured from Florida waters and then schooled by the Miami Seaquarium for their crowd pleasing show at the biggest of all shows.

Parable (Color, 1964, Rolf Forsberg)
This highly controversial film was commissioned by the Lutheran Council for screening at the 1964 World's Fair. The depiction of Jesus as a pantomime circus clown was met with floods of protestors, but it also garnered the film numerous awards and recognitions, as well as inspiring the musical Godspell. In 2012, Parable was added to the National Film Registry.

Man's Search for Happiness (Color, 1964)
Do you ever wonder "Who am I?" "Where did I come from?" or "Where am I going?" Well, make a stop at the Mormon Pavilion at the 1964 New York World's Fair and learn the LDS path towards happiness. And make sure you get to greet your dead loved ones in Heaven in a bathrobe! 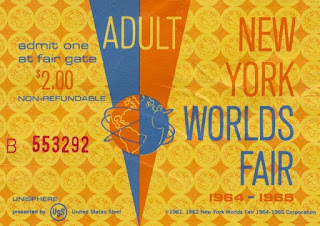