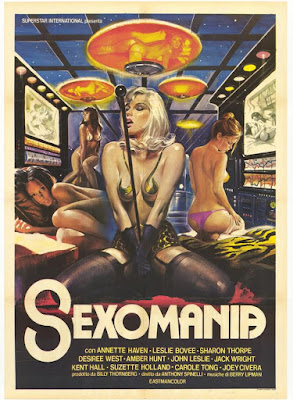 Oddball Films presents Strange Sinema 94, a monthly screening of new finds, old gems and offbeat oddities from Oddball Films’ vast collection of 16mm film prints. Drawing on his collection of over 50,000 16mm film prints, Oddball Films director Stephen Parr has compiled his 94th program of classic, strange, offbeat and unusual films. This installment, Strange Sinema 94: Sex in Cinema is an eye-popping exploration of sex in cinema and all its genres from industrial films, commercials, animated features, amateur films, documentaries and musical shorts.  Sex sells, they say and this program showcases the vast variety of outlets for it. We lay the foundation for our program with The Most (1963), a rarely screened, award-winning biopic by Richard Ballentine and Gordon Sheppard, that chronicles Pl*yboy’s Hugh H*fner, the man known for selling sex to America and creating a socio-sexual cultural phenomenon. Insightful and ferocious, this doc uncovers the banal layers of H*fner’s lifestyle and narcissistic “genius”. Winner of the San Francisco International Film Festival’s Golden Gate Award. We continue our program with a jaw-dropping sexist commercial for Chemical Bank (1970s) “When her needs are financial her reaction is chemical” and a 1960s inspired occult spot for Bigelow Carpets followed by Wear Safety Shoes (1970s), a fetishistic advertisement for safety shoes. Other gems include a peek inside Fredericks of Hollywood (1970s) and its sexist camp and over–the-top fanny pad saleswomen, Erik Is Here! (1960s) featuring a man, his Viking ship and his sexy cigar, Sadie the Sunbather (1948), a rare, titillating soft-core “nudie cutie” by Seaside films featuring a buxom female and a snarky sexist narrator and Clorets (1950s), a pseudo-scientific study of bad breath (!) and social stigmas. Other highlights include Texas Strip (1948), the musical Soundie that inspired the Devo video “Whip It”, where a singing cowboy flirts with cowgirls sitting on a fence, then strips one of them with his whip (oh my!), the trailer for American Dreamer (1971) the most pretentious, hilariously awful, mind-boggling bio-sex film to ever come from the coked out head of Dennis Hopper. Other eye-popping shorts include highlights from the infamous New York Erotic Film Festival (1971), a fashion trip to polyester land as statuesque models show off Christian Dior Action Wear Hosiery and Yves St. Laurent belts and scarves amidst the picturesque ruins of Athens in The Greeks Have a Word For It (1969), Woody Woodpecker in romantic drag romances Wally the Walrus in The Gate Crasher (1969) and don’t miss The Magician (1970s) as he strips he-men naked through the wonders of stop-motion animation. We climax with a Salvo soap ad starring Wally Cox (TVs Mr Peepers) as he plays two roles (one in drag) to sell laundry detergent and Dirty Duck (1974) Charles Swenson’s infamous animated cult film trailer produced by sleaze meister Roger Corman! 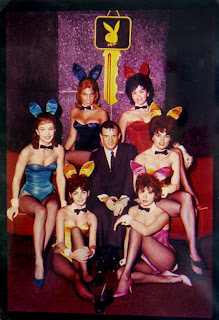 The Most (B+W, 1963)
"It's not very flattering but it's a work of art."-Hugh Hefn*r
“a witty and ferociously loaded profile... The simple but devastating technique is to let Hefn*r spout his philosophy, then, sandwich each banality between fleshy layers of a Playboy party.”
The Sunday Telegram July 26, 1964

This rarely screened, award-winning biopic by Richard Ballentine and Gordon Sheppard, chronicles the man known for selling sex to America and creating a socio-sexual cultural phenomenon, Hugh Hefn*r.
The documentary short, which won the 1963 San Francisco International Film Festival's Golden Gate Award, is an incredibly savage length of film. One wonders, in the face of all the evidence, if it really is a documentary, if its subject-Hugh Hefn*r, Playb*y magazine, Pl*yboy Clubs, Pl*yboy bunnies, the lot — exists at all. That man, strutting, preening, posing, and spouting nonsense, is a new kind of animated cartoon, a sort of mental Magoo who cannot possibly realize what he is saying when he admits, with feigned modesty, "It's probably not true that I have made love to more beautiful women than any man in history," or when he asserts, "Going by the strict definition of the word, yes, I suppose I am a genius." 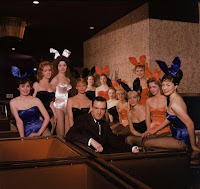 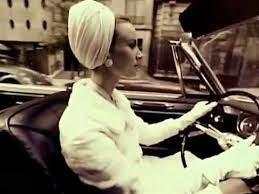 Chemical Bank (Color, 1970s)
The New York Woman! “When her needs are financial her reaction is chemical”.
is the sexist tagline for this hilarious and jazzed–up commercial for Chemical Bank.

Bigelow (Color 1970s)
In a nod to sixties occultism, this commercial features the sexy Erin Gray crawling around on shag carpet samples, purring about the carpet line, specially designed for the signs of the zodiac. Beyond campy! 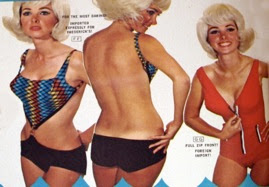 Erik Is Here! (B+W 1960s)
A Nordic man in a black turtleneck sails into New York harbor in a Viking ship, smoking cigarettes in this hilarious advertisement. “Erik is here! the most interesting idea from Scandinavia since blondes”

Sadie the Sunbather (B+W, 1948) A titillating soft-core “nudie cutie” by Seaside films features the typical buxom female and a snarky sexist narrator who starts out by stating  “amateur sunbathing is the art of greasing yourself up like a shock absorber”. It only gets better (and skimpier) from there!

Texas Strip (B+W, 1948)
This jukebox Soundie, inspired the Devo video “Whip It”.  Watch as a singing cowboy flirts with cowgirls sitting on a fence, then strips one of them with his whip (oh my!). 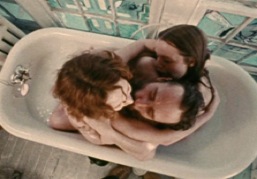 The American Dreamer is a multi-faceted document of the life and mind of Dennis Hopper, one of the 20th century's great cinematic voices at the peak of his artistic and commercial success. Shifting between being an insightful document of a complex artist in the midst of his creative process and a self-reflective exploration and explosion of vérité filmmaking tropes, The American Dreamer is a mesmerizing journey into the private world of one of Hollywood's most hypnotic directors/stars. Fortuitously timed, fantastically made, and virtually unseen, The American Dreamer is the great 70s film documentary you always wished existed.
The above is how the film is now being promoted. In actuality this trailer is the most pretentious, mind-boggling film to ever come from the cocked out head of Dennis Hopper. Watch him spout lines in this (thankfully short trailer) like “I don't believe in reading. By using your eyes and ears you'll find everything there is." Or how about "I'd rather give head to a woman than fuck them...Basically, I think like a lesbian." We also get to watch him strip down in the middle of a suburban street and stroll about, butt naked. Hilariously awful. 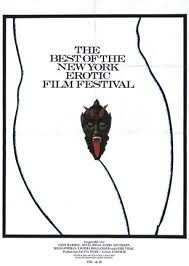 The Greeks Have a Word for it.  (Color, 1969)
In a play on Greek culture, and amidst the picturesque ruins of Athens, Greece this Roger Dee Fashion Vision film waxes poetic in it’s over-the-top metaphors of Aphrodite. Statuesque models show off Christian Dior Action Wear Hosiery and
Yves St. Laurent belts and scarves, later modeling Monsanto-based polyester swim and outerwear-the fabric of the future from the garden of the gods! Don’t miss the laughable narrator’s depiction of these “mythic” models.

The Magician (B+W, silent 1970s)
This amateur soft-core short showcases a magician and his he-men. Marvel as he magically strips them, (through the magic of stop motion animation) of all their clothing before our very eyes! 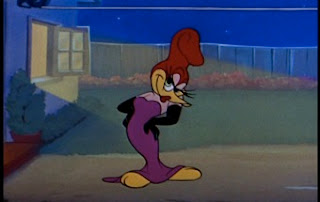 The Gate Crasher (B/W 1969)
Woody Woodpecker dresses in drag in order to sneak into a barn dance and eat a ton of food. Unsuspecting Mr Walrus takes him home and finds out what this “Lady” is really made of. A laugh riot!.

Salvo Detergent with Wally Cox (B+W,1960s)
Wally Cox, famed goofball, and star of TVs Mr Peepers (and rumored lover of Marlon Brando) plays both the son and his mother (while in drag) in this bizarre detergent ad from the 1960s. 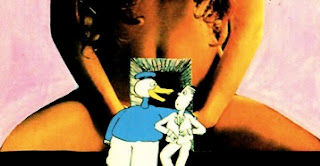 Dirty Duck (Color,1974)
Bizarro trailer for the X-rated animated film directed by Charles Swenson and funded by producer Roger Corman, Voiced by Zappaesque rock legends Mark Volman and Howard Kaylan (Flo+Eddie). Epic weirdness in a film called “A sprawling undisciplined piece of sniggering vulgarity” and “one of the most overlooked animated features of the 1970s, a glorious experimental mess of a film, which, from today’s vantage point, looks incredibly creative and daring, and something current Hollywood studios would never attempt.” A cult classic. 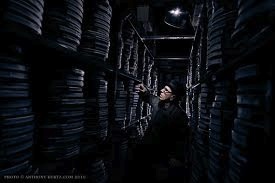 San Francisco archivist, imagemaker and curator Stephen Parr, founder of Oddball Film+Video has a long history of presenting and archiving the unusual. Since the 1970s Parr has produced and documented live performances of John Cage, Christian Marclay and The Ramones, screened his signature pop culture montages from the Danceteria in New York to the Moscow Cinematheque. He’s created found footage based films such as Historical/Hysterical?, The Subject is Sex and Euphoria! which have screened worldwide in venues such as The Anthology Film Archive, Jaaga in Bangalore, South India and the Leeds International Film Festival. He curates an eclectic weekly film series-Oddball Films at his archive and is a frequent presenter at film and media seminars and symposiums. He is an active member of the Association of Moving Image Archivists. He has currently completed Laservision, a program of films exploring the history of lasers and holography inaugurating the Science, Art and Cinema series at  Miami’s Frost Museum.

About Oddball FilmsOddball films is a stock footage company providing offbeat and unusual film footage for feature films like Milk, documentaries like The Black Panthers: Vanguard of the Revolution, Silicon Valley, Kurt Cobain: The Montage of Heck, television programs like Mythbusters, clips for Boing Boing and web projects around the world.
Our screenings are almost exclusively drawn from our collection of over 50,000 16mm prints of animation, commercials, educational films, feature films, movie trailers, medical, industrial military, news out-takes and every genre in between. We’re actively working to present rarely screened genres of cinema as well as avant-garde and ethno-cultural documentaries, which expand the boundaries of cinema. Oddball Films is the largest film archive in Northern California and one of the most unusual private collections in the US. We invite you to join us in our weekly offerings of offbeat cinema.