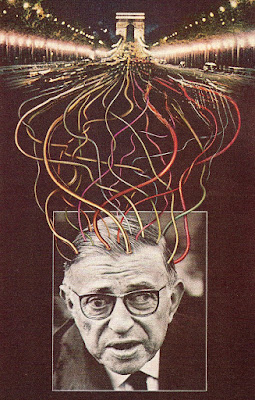 Oddball Films presents What the F(ilm)?! 14: Cine-Insanity from the Archive, an evening of some of the most bizarre, hilarious and insane films from our massive 16mm collection.  This compendium of 16mm madness is too strange to be believed and too baffling to be forgotten.  This time around we've got boxing chimps, boxing robots, burlesque cartoons, mimes, musical promotional films, a John Cleese office training film and even more celluloid psychosis!  British comedy legend John Cleese produced, wrote and stars in Meetings, Bloody Meetings! (1976) a hilariously infotaining training film on running more effective meetings.  Famed French mime Marcel Marceau takes us through the comedic and the ridiculously melodramatic facets of the age-old creepy traditions of mime in Pantomime: Language of the Heart (1975). The hilarious Doubletalk (1975) lets you in on what everyone is really thinking when a boy has to meet his date's parents. Take a musical-political break with Schoolhouse Rock and Sufferin' till Suffrage (1974). Little Billy heads out into the woods and makes friends with a man wearing a shag carpet in the f#*ed up communication primer Billy and the Beast (1972).  Bell telephone presents a mini-musical of telephone switching boards and automatic shoe machines in the West Side Story of promotional films Conversation Crossroads (1958). Get a taste of antiquated entertainment with the spoof newsreel Goofy Movies Number 4 (1934) featuring boxing chimps, ladies on train tracks, and rockets on row boats. Plus, two antique cartoons:  M*ckey Mouse builds a robot boxer and pits him against an ape in Kongo Killer (1933, AKA M*ckey's Mechanical Man) and Krazy Kat's girlfriend takes the stage to do a risqué burlesque fan dance in Frogs and Kats (1930s). 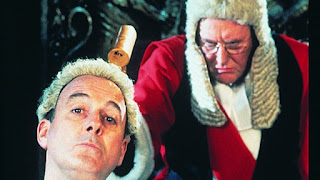 Meetings, Bloody Meetings! (Color, 1976)
Who says office training films can't be hilarious? Comedy legend John Cleese wrote and stars in this bizarro office training film about the ins and outs of planning and running effective meetings in your office.  The film is apparently so infotaining that it has been re-released every decade or so since and re-made in 2002! Cleese stars as a bumbling middle-manager who struggles to run effective meetings.  In a ridiculous nightmare Cleese is summoned before the court to answer for his many offenses.  Fun fact: in the remake Cleese returns as the judge to pass sentence on a new generation of hapless management.

Billy and the Beast (1972, Color)
A whacked out film about communication, this film is certainly a strange one from the children’s educational genre.  After being shunned by his ‘friends’, Billy takes a wander in the woods to be by his lonesome and ponder his predicament.  Along the way, he  meets a creature that ‘no one has ever seen’ and strikes up a friendship through non-verbal communication.  Moral of the story, communication doesn’t have to be through speech and hairy guys in the woods wearing ragged shag carpets can be friends, too.

Pantomime: Language of the Heart (Color, 1975)
Famed mime Marcel Marceau demonstrates both comedic and melodramatic mimery with tons of overly dramatic dissolves and classical music.  In this film, learn how mimes use facial expressions and only their own bodies to get across stories and emotions that usually take spoken words and props to communicate. You'll never have a greater appreciation for the spoken word and props! 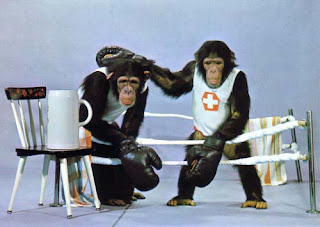 Goofy Movies 4 (B+W, 1934)
Pete Smith (the king of wacky newsreel narration) provides explanatory notes for a mock melodrama.  With a "Wotaphony Newsreel" of boxing apes (Hears/Sees/Knows Nothing) and clips of a woman and child being lowered out of the window of a burning home, only to go toppling over half way down, a man putting rockets on his row boat and a chimpanzee boxing match. Then, “Passions of Horse Pistol Pete” featuring a man and woman sitting under a tree on a bench, while another man interrupts and a goofy plot involving robbers, a lawman, and a train - and the quintessential damsel in distress collapses on the tracks and the train must slow down so a man can scoop her up. 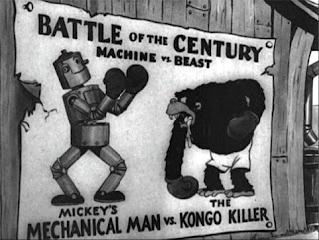 M*ckey Mouse in Kongo Killer (B+W, 1933)
Also known as "M*ckey's Mechanical Man".   Everybody's favorite rodent is getting into the boxing game; only he's not getting in the ring with a giant gorilla known as Kongo Killer, he's built a boxing robot that's going to fight his battles for him!

Krazy Kat, “Frogs and Kats” (B+W, 1930s, silent with added soundtrack)
Miss Kitty Kat is dying to get her time on stage, so when she falls on the leading lady for the night (and turns her into a frog?), she's got to beg Krazy to accompany her on the piano. Miss Kitty Kat finally gets her chance and dances with feathers and other cats burlesque style. One lecherous guy in the audience even has an x-ray machine to see Miss Kitty nude! 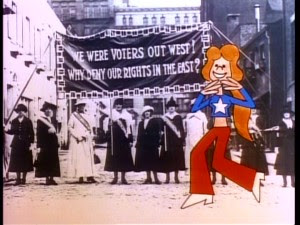 Schoolhouse Rock: Sufferin' Till Sufferage (Color, 1974)
After the elections and in concurrence with Suffragette, we bring you this super groovy musical break for the ladies from the iconic cartoonucational show Schoolhouse Rock.


Doubletalk (Color, 1975)
Hilarious short! A boy picks up his date at her home and meets the parents- and we hear what everyone is really thinking over the niceties and conversation. Originally broadcast on Saturday Night Live, this forgotten gem plays like a distilled Meet The Parents and is also notable as the film debut of Robert Picardo (Star Trek: Voyager). 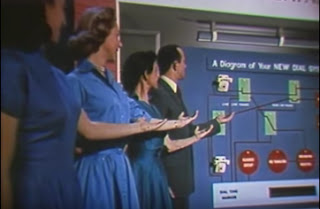