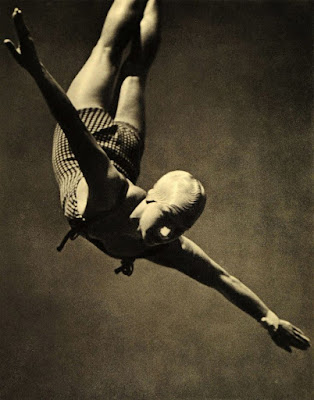 Oddball Films presents Strange Sinema 98, a monthly evening of newly discovered films, rarities and choice selects from the stacks of the archive. Drawing on his collection of over 50,000 16mm film prints, Oddball Films director Stephen Parr has compiled this 98th program of classic, strange, offbeat and unusual films. This installment, Strange Sinema 98: “Ecstatic Motion” - High-Wire Feats, Wild Horses, & Speed Wizards features a sampling of films that stretch the boundaries of cinema while serving to bring a sublime ecstasy to the viewer. From famed director Claude LeLouche’s (A Man and a Woman) mad dash (at speeds of up to 140 mph) through the early morning streets of Paris in Rendezvous (1976) to the legendary high wire artist Philippe Petit’s metaphoric bridging of the ancient and modern in High Wire (1984), this program explores the exalted, the experimental and the ecstatic side of cinema in all its genres. Other films include Denys Colomb de Daunant’s Dream of Wild Horses (1962), a remarkable cinematic poem using slow motion and soft focus camera to capture the wild horses of the Camargue District of France as they roam on the beach running through walls of fire and water, Nazi cinematographer Leni Riefenstahl's legendary (and breathtaking) Olympia Diving Sequence (1936) from the Berlin Olympics, Dream Flowers (1930s), a fascinating profile of the opium poppy and those who partake of it, Maya Deren's A Study in Choreography for the Camera (1945) which articulates the potential for transcendence through dance and ritual, The Wizard of Speed and Time (1979) featuring Mike Jitlov’s legendary mind-blowing special effects speed binge, Arabesque (1975), John Whitney’s masterpiece of shimmering, oscillating waves set to the music of Persian composer Maroocheher Sadeghi, Free Fall (1964) from the brilliant director Arthur Lipsett and featuring dazzling pixilation, in-camera superimpositions and percussive tribal music that - in his words “attempt to express in filmic terms an intensive flow of life – a vision of a world in the throes of creativity and the transformation of physical phenomena”, and finally, Busby Berkeley pushed cinema iconography a step further when he conjured up a thousand surrealist Ruby Keelers for the show stopping I Only Have Eyes for You number from the 1934 musical Dames.

High Wire (Color, 1984)
Directed by Sandi Sissel. Philippe Petit (“Man on Wire”) is a French high wire artist who gained fame for his spectacular walk between the Twin Towers in New York City on August 7, 1974. Here he metaphorically bridges the ancient and modern as he walks a high wire suspended between the towers at New York City’s Cathedral of St. John the Divine and a sixteen story high-rise building across the street. With sound score by composer Phillip Glass.

Rendezvous (Color, 1976)
"Yes, I was scared. I was scared of running out of film”- Claude Lelouch
In 1976, at the end of a film shoot, Director Claude LeLouch (A Man and a Woman) found himself in possession of four things:  a camera with ten minutes of film left, a gyroscopically stabilized camera mount, a sports car, and an idea: to film a mad dash (at speeds up to 140 mph) through the early morning streets of Paris.  Denied the necessary permits, he shot the film guerrilla-style, in one take, with no special effects and no street closures.  No one was hurt, his subsequent arrest was brief, and the film has become a legend. One take, no film tricks- you won’t believe your eyes.

Dream of the Wild Horses (Le songe des chevaux sauvages) (Color, 1962)
Directed by Denys Colomb de Daunant with innovative musical score by Jacques Lasri this cinematic poem which uses slow motion and soft focus camera to evoke the wild horses of the Camargue District of France, showing them as they roam on the beach running through walls of fire and water.  A remarkable film.

Olympia Diving Sequence (B+W, 1936)
A section from Leni Riefenstahl's film of the 1936 Olympics. Leni Reifenstahl was one of the most talented and innovative female directors of the 20th century. Her adulation of Nazi Germany in her film “Triumph of the Will” (1934) ensured that she was the most infamous as well. In 1936, at Hitler's behest, she filmed the Berlin Olympics. She used more than 40 cameramen, shot 250 miles of film and spent 18 months in the cutting room. The Olympia Diving Sequence is a supreme example of editing where physics are transcended and somehow weightlessness is achieved. This film, despite its overtly Aryan leanings is also a celebration of the human form. Film critic Pauline Kael called Triumph and Olympia "the two greatest films ever directed by a woman.”

A Study in Choreography for Camera  (B+W, 1945)
Maya Deren was one of the most important avant-garde filmmakers of the 20th century working and spending time with such artists as Marcel Duchamp, Andre Breton, John Cage and Anaïs Nin. In A Study in Choreography Maya Deren's 16mm Bolex becomes a performer equal in significance to the star of this film, Talley Beattey. In the opening sequence Deren's camera rotates more than 360 degrees, scanning past the figure in movement. In this film Deren articulates the potential for transcendence through dance and ritual. Deren writes, “The movement of the dancer creates a geography that never was. With a turn of the foot, he makes neighbors of distant places” -Wendy Haslem

The Wizard of Speed and Time (Color, 1979, Mike Jitlov)
A young man in a green wizard costume runs throughout America at super speed. Along the way, he gives a pretty girl a swift lift to another city, gives golden stars to other women who want a trip themselves and then slips on a banana-peel, and comically crashes into a film stage, which he then brings to life in magical ways.
Jittlov is a special effects technician, and produced all of the special effects in the film himself, many through stop motion animation.
This mind-blowing, celebratory short was originally shown as a segment of an episode of The Wonderful World of Disney and later extended to a feature length film.

Free Fall (B+W, 1964)
The brilliant avant-garde filmmaker Arthur Lipsett (who committed suicide in 1986) is, in the words of Lipsett himself, an “attempt to express in filmic terms an intensive flow of life – a vision of a world in the throes of creativity – the transformation of physical phenomena into psychological ones – a visual bubbling of picture and sound operating to create a new continuity of experience – a reality in seeing and hearing which would continually overwhelm the conscious state – penetration of outward appearances – suddenly the continuity is broken – it is as if all clocks ceased to tick – summoned by a big close-up or fragment of a diffuse nature – strange shapes shine forth from the abyss of timelessness.”

Dames (B+W, 1934)
A wondrous excerpt from director Ray Enright's Dames. During the spectacular musical number I Only Have Eyes for You, Ruby Keeler is the only girl in the world, but there are hundreds of her in this dreamy landscape.  And from those hundreds, one face emerges, and when Miss Keeler pops out of a giant eye there can be little doubt that notorious dance director Busby Berkeley had something seriously surrealist in mind! 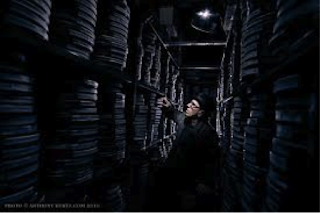 About Oddball Films
Oddball Films is a stock footage company providing offbeat and unusual film footage for feature films like Milk, documentaries like The Black Panthers: Vanguard of the Revolution, Silicon Valley, Kurt Cobain: The Montage of Heck, television programs like Mythbusters, clips for Boing Boing and web projects around the world.
Our screenings are almost exclusively drawn from our collection of over 50,000 16mm prints of animation, commercials, educational films, feature films, movie trailers, medical, industrial military, news out-takes and every genre in between. We’re actively working to present rarely screened genres of cinema as well as avant-garde and ethno-cultural documentaries, which expand the boundaries of cinema. Oddball Films is the largest film archive in Northern California and one of the most unusual private collections in the US. We invite you to join us in our weekly offerings of offbeat cinema.