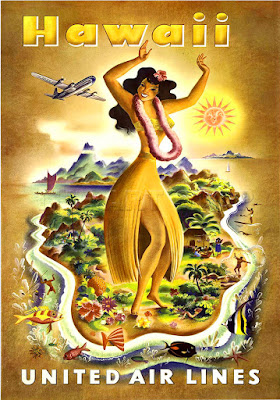 Oddball Films presents Tiki Fever! Vintage Hawaiiana. This evening of surf, tiki and Polynesian serenades offers an array of breathtaking, mesmerizing and rare films about an idyllic Hawaii including cartoons, mini-musicals, burlesque, promotional and ephemeral films from the 30s thru the 50s - all on 16mm film from the archive. See pre-jet travel footage of Waikiki beach and music by Sol Hoppii in Hawaiian Rhythm: Hawaiian Nights (1939). Then join the jet-set as two newlyweds travel from New England to Hawaii via stylish Pan Am jet in the campy promotional travelogue Wings to Hawaii (1947). The mini-tiki-musical Isle of Tabu (1945) features angry Tiki Gods, erupting volcanoes, human sacrifice and (of course) musical numbers. Betty Boop hulas her heart out in nothing but a grass skirt and a lei in the pre-code Fleischer Brothers cartoon Betty Boop's Bamboo Isle (1932) with an authentic soundtrack by the Royal Samoans and rotoscoped hula moves. Homer Groening gives us A Study in Wet (1964), a poetic meditation on water including plenty of groovy surf shots, natural psychedelia and a soundtrack made up of water droplets. Learn how you too can make a Coconut Head Bank (1950s) in a bizarre slice of instructional Tiki ephemera. Plus! A Hula Hottie Burlesque (1950s), an island full of Hawaiian Soundies (1940s) like the goofy Little Grass Shack , a Busby Berkeley musical number Aloha Oe from Flirtation Walk (1934) and more! For the early arrivals there is the rare Kodachrome short, Polynesian Holiday (1955) starring bandleader Harry Owens and featuring his Academy Award winning Sweet Lailani.

Betty Boop's Bamboo Isle (B+W, 1932)
While not the most racially sensitive Betty Boop cartoon, this nonetheless fun Fleisher Brothers animation features music by the Royal Samoans and Betty Hula dancing before the natives get restless.  Betty's authentic dancing was rotoscoped from performances by native dancers.  Rotoscoping was a technique pioneered by the Fleischers in which they would trace the body movements from a human subject onto the animation cell to achieve the most realistic movement and proportion of their cartoon characters. 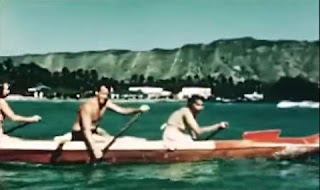 Wings To Hawaii (Color, 1947)
This beautiful and campy color promotional film begins in a small New England town with a newlywed couple (Dick and Nancy) on their way to San Francisco, where they enjoy the views from atop the Mark Hopkins Hotel before heading off to the Pan Am Clipper Boeing 377 for a flight to Hawaii. The remainder of the film shows us everything you would expect to see in mid-century Hawaii: a luau, hula dancing, erupting volcanos and some great outrigger and surf scenes! 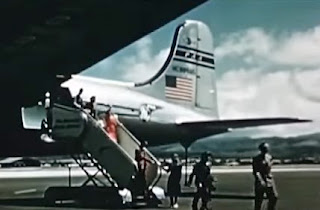 The Boeing 377 Stratocruiser was a luxurious long-range postwar prop airliner. Its pressurized cabin could hold about 100 passengers or sleeping berths for up to 28 berthed and 5 seated passengers. One distinctive feature was a lower-deck lounge, reached by a spiral staircase from the upper-deck, that inspired the one on the later 747 jumbo. Only about 56 were built as airliners and by the early 60's, they were quickly made obsolete by the success of the Boeing 707 jetliner. The next morning the Pan Am Clipper arrives in Hawaii and passengers are exiting PAA N90944, Clipper Romance of the Skies. NOTE: This Clipper was involved in the 2nd worst accident involving a Boeing 377 when on November 8, 1957 the aircraft crashed into the Pacific Ocean, 940 miles east of Honolulu. 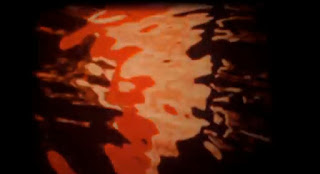 Study in Wet (Color, 1964)
A short, semi-experimental piece from Matt Groening's father, Homer Groening.  As a title card informs us in the beginning, everything in this film is wet; from mesmerizing reflections on the ocean to groovy 60s surfer chicks to the melodic drip drip dripping of the soundtrack (which is a recording of water droplets falling into a bathtub).  The trippy visuals will make you think that optical effects were used, but it's simply the magic of science, nature and Groening's eye that bring us such incredible and otherworldly imagery.

Hawaiian Rhythm/Hawaiian Nights (B+W, 1939)
Two early shorts from Castle Films (later to become the leader of 8mm and 16mm films sold to consumers for in-home projection). Hawaiian Rhythms is a compilation of mostly Anglo-Hawaiian Soundies with some great hulas and luau scenes, while Hawaiian Nights is more of a travelogue with music, including the slack-key master Sol Hoppii and amazing footage of Waikiki beach, outriggers and surfers in the days long before jet travel and high-rises.

Coconut Head Bank (B+W, 1950s)
Watch this step-by-step demonstration of how to make a Missionary bank with a coconut and some common household supplies! 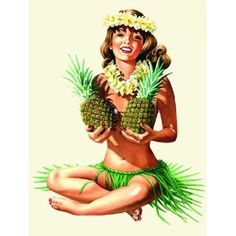 Hula Hottie Burlesque (B+W, 1950s)
Check out that pair of coconuts! A tantalizing tidbit of Tiki T&A, this exotic slice of smut features a pretty blonde hulaing her ass off.

Isle of Tabu (Color, 1945)
Two-hour musical epic packed into 17 minutes! Part of Paramount’s Musical Parade Featurette Series, this early Tiki film has angry Tiki gods, exploding volcanoes and a curse-lifting, human sacrifice plot with some song and dance numbers and a happy marriage ending. The not-so-authentic natives include Nancy Porter in her starring role debut (never to be heard from again) and several B-movie pretty boys. Music by Napua, Sam Koki and his Islanders and Pau Kua Lana Girls. Director William Shea’s most notable later work was an episode of “Mister Ed”. 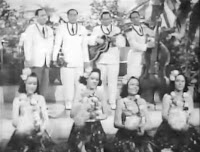 Hawaiian Soundies (B+W 1940s)
The precursor to the music video, the Soundie was a short musical film made in the 1940s, often featuring singing and dancing in under 3 minutes. They were distributed to be played on specialized jukeboxes in night clubs, bars and amusement parks. Cashing in on the huge popularity of the Hawaiian aesthetic, dozens of Hawaiian soundies were made to exoticize the musical roster. 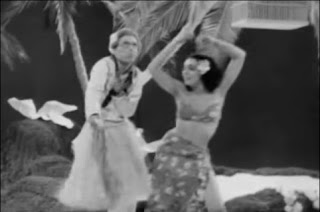 “Little Grass Shack”
A goofy sailor plays the ukelele and sings about the ladies of Hawaii, all the while an overly-aggressive hula dancer tries to seduce him into dancing with her. 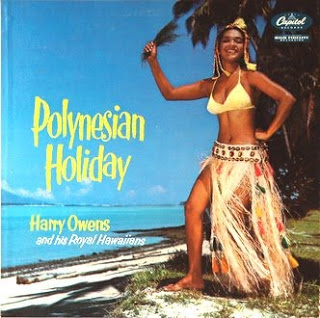 About Oddball Films
Oddball Films is a stock footage company providing offbeat and unusual film footage for feature films like Milk, documentaries like The Black Panthers: Vanguard of the Revolution, Silicon Valley, Kurt Cobain: The Montage of Heck, television programs like Mythbusters, clips for Boing Boing and web projects around the world.Our screenings are almost exclusively drawn from our collection of over 50,000 16mm prints of animation, commercials, educational films, feature films, movie trailers, medical, industrial military, news out-takes and every genre in between. We’re actively working to present rarely screened genres of cinema as well as avant-garde and ethno-cultural documentaries, which expand the boundaries of cinema. Oddball Films is the largest film archive in Northern California and one of the most unusual private collections in the US. We invite you to join us in our weekly offerings of offbeat cinema.