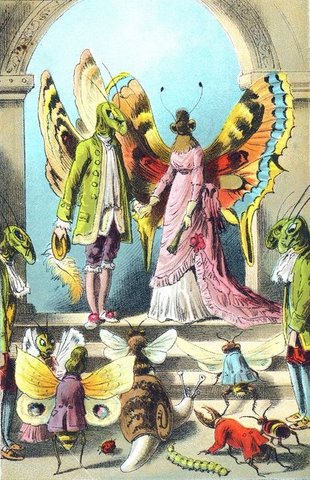 Oddball Films and guest curator Kat Shuchter bring you Buggin’ Out, a night of vintage 16mm films crawling with all your favorite insect friends and foes.  From mesmerizing nature films to charming cartoons from around the world to kitschy educational primers, we take this night to celebrate all things buggy.  Watch the rare and delightful Ferda the Ant (1941), a Czech puppet-animation sporting the first wire-framed creatures on film.  Merrie Melodies brings us Bug Parade (1941), replete with countless sight gags about a bevy of cartoon bugs.  View the beauty and intricacies of the beehive while it’s projected 10 feet high in Bees: Backyard Science (1978) and marvel at the incredible metamorphosis of lepidotera in The Monarch Butterfly Story (1987).  The Japanese bring us the cutest dancing bug party ever, in the trippy stop-motion version of the Aesop’s Fable The Ant and the Grasshopper (1967). Marvel at the ferocity of tiny adversaries when termites square off against hungry ants in The Battle of the Centuries (1932). Get ready for the itchy-kitschy Lice are not Nice (1985), a hilarious classroom primer on that playground scourge, head-lice.  Meet the fly’s worst nightmare in Carnivorous Plants (1965).  With vintage insecticide commercials, creepy-crawly trailers, free gummi-worms and tons of other surprises including a special appearance by the  Bay Area's award winning Insect Discovery Lab, visit with Giant African millipedes, Australian walking sticks, giant thorny phasmids, and eastern lubber grasshoppers and a few mystery guests , this is one night that will leave you itching for more! 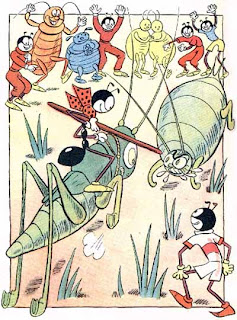 Bees: Backyard Science (Color, 1978)
In this educational short, we get an up-close look at the marvelous life and world of bees.  With hypnotic imagery capturing the marvelous complexities of the honeycomb and a magnified glimpse into the life-cycle of this painful honey-maker. 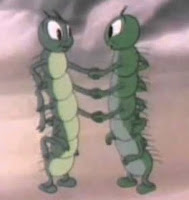 Merrie Melodies Bug Parade (Color, 1941)
A cartoon spoof of educational insect films, this hilarious short brings us an unending stream of visual puns, from the tried and true "horse-fly" to a wasp losing her corset and hence her waspy figure.

In this early educational film, we get a front row seat to the fiercest battle one log has ever seen!  We follow the life-cycle of those disgustingly fascinating wood-munchers, termites, up to when they must lay their lives on the line to battle their mortal enemies, marauding bands of hungry ants.  Simultaneously riveting and repellant, this film was produced by Standard Oil not long after the advent of sound.

Carnivorous Plants (Color, 1965)
A scientist (who looks like he walked off the set of Mad Men) teaches us about three very special plants.  Beautiful to humans, but deadly to flying insects, the fascinating Venus Flytrap, Common Sundew and Pitcher Plant reveal their strange eating habits, to our amazement and the insects' chagrin. 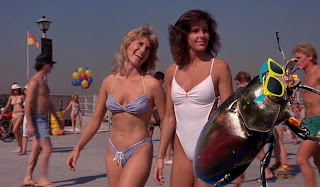 Plus, For the Early Birds, One Tasty Worm!

The Bee and the Butterfly (B+W, 1932)
This is one ill-fated, but beautiful love affair.  A grouchy bee meets and falls for a beautiful lady butterfly (one who bears striking resemblance to Betty Boop), but an evil spider's not planning on sending them a china set from Pottery Barn for the wedding, he's too interested in eating the entire wedding-party. One of Paul Terry's Terrytoons.

Curator's Biography
Kat Shuchter is a graduate of UC Berkeley in Film Studies. She is a filmmaker, artist and esoteric film hoarder. She has helped program shows at the PFA, The Nuart and Cinefamily at the Silent Movie Theater and was crowned “Found Footage Queen” of Los Angeles, 2009. This show will mark her One Year-Anniversary curating at Oddball!

About the Insect Discovery Lab


The Insect Discovery Lab presents more than 800 programs annually inspiring children and adults from pre-k  to seniors to connect with nature. And, now you can go behind the scenes at the Insect Discovery Lab on exclusive and private tours - call 415.648.3392 for more information.
http://savenature.org/content/IDL