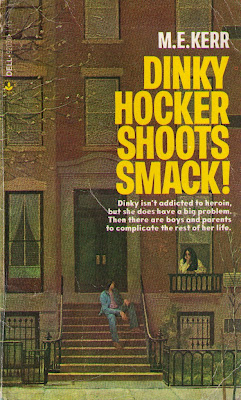 Oddball Films, with Lynn Cursaro, presents: Dinky Hocker: A Special Evening with the ABC Afterschool Special. Nothing satisfies the appetite for over-the-top adolescent angst like an Afterschool Special and Dinky Hocker (1979), really hits the spot. Meet pudgy Dinky Hocker, a bright high schooler with two insatiable hungers: mom’s attention and any sugary snack she can get her hands on! Dinky's mom keeps the home cookie jar stocked, but is much too preoccupied with counseling young drug addicts and saving rivers for any other maternal chores. After reinvention via dieting fails, Dinky schemes to give mom the shock of her life. Stellar performances by Wendie Jo Sperber (Bosom Buddies) as Dinky and iconic TV mom June Lockhart (Lassie, Lost in Space) are balanced with moments of ham-fisted teen drama. Living room rolfing, anyone? Preceding, Dinky: Middle-schoolers pitifully demonstrate the privations of a crowded world with very small portions in Too Many People (1975). When Woody Woodpecker stays put for the winter, hunger leads to tried and true animated brutality in Pantry Panic (1941), one of his first cartoon outings.  Also: A luscious buffet of Vintage Food Commercials will be served up,  à la Oddball, throughout the screening.  And . . . home-baked treats for all from the Kuritorial Kitchen (while supplies last!).

Dinky Hocker (Color, 1972)
Meet pudgy Dinky Hocker, a bright high schooler with two insatiable hungers: maternal attention and any sugary snack she can get her hands on! Dinky's mom keeps the home cookie jar stocked, but is much too preoccupied with counseling young drug addicts and saving rivers for any other motherly duties. After reinvention via dieting fails and her new beau is banished, Dinky schemes to give mom the shock of her life. 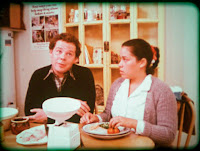 The ABC Afterschool Special graced the television airwaves from 1972 to 1997.  It sought to present powerful and persuasive cautionary tales and melodramas for teens and preteens. With subject matter from steroid abuse to anorexia to teenage pregnancy, these shows were often preachy and schmaltzy, but always...always Special! 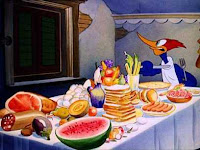 Pantry Panic  (Color, 1941) by Walter Lantz
Woody Woodpecker passes on flying south for the winter, but once every last scrap of food is gone he finds himself locked in a brutal battle of the wills with an equally famished visitor to his snowbound village.  One of the first Woody cartoons ever made—the artwork is exquisite!  Not for tender vegetarians. 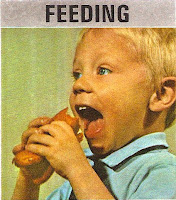 Too Many People (Color, 1973)
Budding breeders of grade school age demonstrate the chilling effects of the projected population boom. Water, party dresses and even pencils will be in short supply . . .  and boy, will you ever be hungry! Made in an era when 6th graders weren't reproducing in significant numbers, it's hard to fathom any useful message in this Malthusian nightmare other than "enjoy those hot dogs now, Kiddo".

Plus! For the Early Arrivals!
Food advertisements galore and a nutrition classic to be announced!
About the Curator
Lynn Cursaro is a local film blogger. Over the past two decades, she has worked in research and administrative positions a variety of Bay Area film organizations. She also devises the picture puzzle on the Castro Theatre’s monthly calendar.