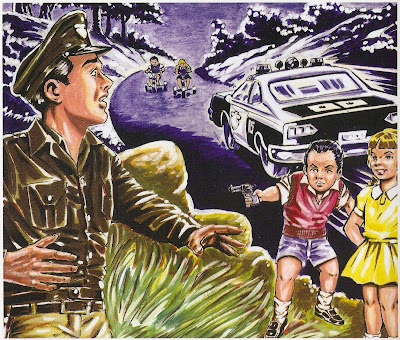 Oddball Films and guest curator Landon Bates bring you Crime Watch!, a program chock-full of cops and their criminal counterparts.  Every film will be markedly different from every other, but all will work together to create a sort of panoramic noir.  We’ll begin with Parole (1956), a real live, harrowing parole hearing, shot across the bay at San Quentin, in which an anonymous felon fleshes out his perspective before a board of judges, attempting to have them understand what might drive a man to murder, in hope of being granted some leniency on his sentence.  We’ll then switch point of views, to that of the law enforcement officer, with Arrest (1970’s), a reenactment of an arrest, involving the pursuit of a blonde man suspected of robbery and murder, armed with a pistol and a half-empty bottle of Jim Beam.  Buster Keaton follows, stumbling into frame in his classic Cops (1922) short, wherein he singlehandedly and unwittingly stirs up a city’s entire police force, swiftly becoming public enemy no. 1.  Shoot, Don’t Shoot II (1973) is an unusual “educational” film that tests cadets-in-training on whether or not to deploy their firearms in given situations; though its aim may be to train, so, too, it very definitely entertains.  Cheating in Gambling (1949) gives us a privileged look at the hands of a master card manipulator, John Scarne, who, literally, wrote the book on card hustling.  And, finally, we’ll conclude with a characteristic bang! Flesh and Leather (1951), our only purely fictional narrative film of the night, is a sort of sum of all the elements featured in the preceding films, replete with cops, crooks, killings, and a fixed game; and, it’s set amid the fogbound alleys of our very own San Francisco.  Stay off the 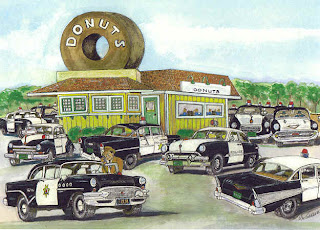 streets for the evening and opt instead to watch these arresting crime films at Oddball.  Plus! In addition to the films will be certain circular treats, in commemoration of National Cream-filled Donut Day!

“I’m not against cops; I’m just afraid of them.”
- Alfred Hitchcock

Parole (B+W, 1956)
An actual San Quentin inmate goes before a panel of judges who will decide whether to revise his sentence and grant him eventual parole, or send him back to his lonely life of indefinite confinement.  The camera sits behind the subject, to conceal his identity, but his desperation is unhidden as he attempts to explain the mental state that possessed him and led to his committing the irrevocable act of murdering his wife.  Despite its exploitative framing (the cases are concluded by the rather inappropriate “PAROLE GRANTED” or “PAROLE DENIED” stamp, like in a proto-Judge Judy) the emotional resonance of the film’s contents prevails. 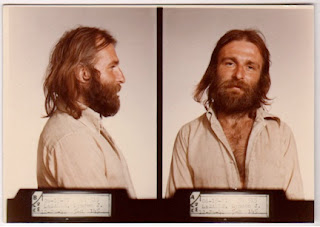 The Arrest (Color, 1970’s)
A detailed procedural reenactment of a murder arrest.  Reminiscent of The Wire?  Well, no, not really.  But, in the less-than-brilliant criminal character you may see surface echoes of the graceless perpetrators of In Cold Blood.  The action is presented from the point of view of the cops, whose narration of the event is done through mock radio transmission, with interior and exterior shots of the moving patrol car on its way to a fateful meeting with the suspect.  During the reenactment of the actual arrest are interspersed stills of the suspect’s detainment.  The half-empty bottle of Jim Beam proves a crucial in this cautionary tale. 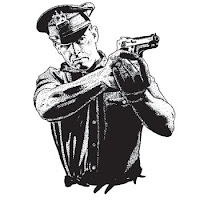 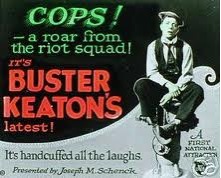 Cops (B+W, 1922)
American cinema’s most beloved buffoon, Buster Keaton, undergoes a series of mishaps in the course of pursuing a girl, and winds up, himself pursued, running from the law (i.e., a city’s entire police force).  The film culminates in the accidental terrorizing of a police parade with a bomb Keaton casually discards over his shoulder, having mistaken its fuse for a lit match with which to light his cigarette.  Other sight gags include a spring-loaded boxing glove, apparently used as a make-shift turn signal on Buster’s jalopy, which thrice slugs a dazed traffic officer.

Cheating in Gambling (B+W, 1949)
What would a crime-themed program be without a healthy dose of gambling?  Nearly 50 years before Martin Scorsese dissected, for the screen, the inner-workings of the casino came this film, an intimate, behind-the-scenes peak into the shadowy world of card hustling.  Though the film’s narrator calls this an “expose,” it plays almost like an instruction guide to deceitful gambling.  John Scarne, a masterly magician and card manipulator (whose credits in the card world are numerous; in the world of movies his hands doubled for Paul Newman’s in The Sting) demonstrates dozens of slippery card maneuvers for the edification of the less conniving.  A bundle of cinematic techniques are employed (freeze frame, slow-motion, camera under a glass table) to break down the dubious card trickery.  As the narrator aptly puts it: “This is what happens when a deck of cards and a pair of loaded fingers get together.” 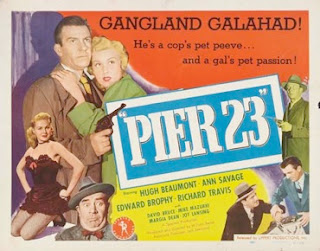 Flesh and Leather (B+W, 1951)
The first half of a two-part film titled Pier 23, this tasty little San Francisco pocket-noir has all the right ingredients: the rigged boxing match, the alcoholic professor, the slitheringly sexy femme fatale, the meat-headed/ham-fisted henchman, and, of course, the quick-talking, morally ambiguous, Marlowe-like amateur detective, who finds himself smack in the middle of a frame.  Hugh Beaumont plays our snappy detective, who would go on, only a few years later, to play the far more wholesome father, Ward Cleaver, in TV’s Leave it to Beaver.  Here, however, you’ll get to see him wheelin’-and-dealin’ in the seedy underbelly of our own San Francisco.

Curator’s Biography:
Landon Bates is a UC Berkeley graduate of English Literature, has worked on several film projects, is the drummer for the lo-fi, two-piece band Disappearing People, and is a cinephile whose devotion to movies knows no bounds.