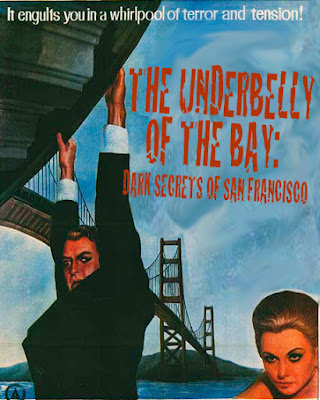 Oddball Films presents The  Underbelly of the Bay: Dark Secrets of San Francisco, a program of short films, documentaries, TV programs, and film noirs revealing the dark side of the Bay Area from the devastating quake at the turn of the 20th century up through the dark arts resurgence of the 1970s. From Satanists to cults, murderers to earthquakes, bombings, crooks and more, this is one dark night in the San Francisco of yesteryear. We begin with the trailer for Hitchcock's quintessential San Francisco murder mystery Vertigo (1958). Films also include the classic 1906 San Francisco Earthquake Film with original footage from the turn-of-the-century quake aftermath. Head to the slammer with Parole (1956), a real life, harrowing parole hearing, shot across the bay at San Quentin, in which an anonymous felon fleshes out his perspective before a board of judges, attempting to have them understand what might drive a man to murder, in hope of being granted some leniency on his sentence. In the 60s and 70s, the dark arts made a fashionable return to the world scene and San Francisco was an epicenter for witches and Satanists alike as seen in The Occult: An Echo from Darkness (1972). Kenneth Anger teams up with Anton LeVay for the psychedelic Satanic symphony Invocation of my Demon Brother (1969) with music by Mick Jagger and shot in SF. The mini-noir Flesh and Leather (1951) is replete with cops, crooks, killings, and a fixed game; and it’s set amid our very own fogbound alleys. Edward G. Robinson stars in an action-packed segment of locally-set noir Hell on Frisco Bay (1955). And finally, a multi-projector romp through the seedy side of San Francisco's own News Outtakes, including an original 1977 news broadcast of Jim Jones and members of the People's Temple after a fire was set at the temple on Geary and San Francisco Bombing (1970) with footage of the notorious SF Police Dept. Park Station bombing, as well as snippets of the investigation into The SLA and more. Everything screened on 16mm film from our massive stock footage collection.


Invocation of My Demon Brother (Color, 1969)
In Invocation of My Demon Brother filmmaker Kenneth Anger creates an altered state of consciousness through the use of cinematic and psycho-spiritual magick techniques.
The film is described by notorious avant-garde filmmaker Kenneth Anger as “An assault on the sensorium” features “underworld powers gathering at a midnight mass to shadow forth Lord Lucifer in a gathering of spirits”. Invocation is a quintessential late 1960 freak-out, containing a montage of drug use, pagan rituals, an albino, stock footage of the Vietnam War, the Rolling Stones in concert and abstract imagery all played  back at various speeds. The film is accompanied by a repetitive, droning Moog musical score created by Mick Jagger. In the words of avant-garde film critic P. Adams Sitney “It is Anger's most metaphysical film: here he eschews literal connections, makes images jar against one another, and does not create a center of gravity through which the collage is to be interpreted... the burden of synthesis falls upon the viewer.” Filmed in San Francisco at the Straight Theater in the Haight and the William Westerfield house on Fulton where Anger resided for a brief time. The film stars Anton LeVay, founder of the Church of Satan and Bobby Beausoleil a former member of the Manson family.

1906 San Francisco Earthquake (B+W, 1906, Silent)
Footage of the city in ruins after the 1906 earthquake. Shots of burned, collapsed, smoldering 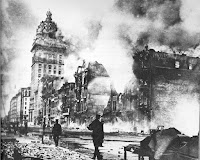 buildings, remaining walls falling down. St. Patrick’s church destroyed in the Mission. Meals cooked, served, and eaten in the streets, relief workers eating and drinking in front of the wreckage. At the intersection of Market and Powell- wagons, horses, early autos, a very busy street and packed cable cars (fixed or still intact?). Finally a sequence showing refugees on ferryboats shuttled over to Oakland. They didn’t waste any time moving on and rebuilding!

An actual San Quentin inmate goes before a panel of judges who will decide whether to revise his sentence and grant him eventual parole, or send him back to his lonely life of indefinite confinement.  The camera sits behind the subject, to conceal his identity, but his desperation is unhidden as he attempts to explain the mental state that possessed him and led to his committing the irrevocable act of murdering his wife.  Despite its exploitative framing (the cases are concluded by the rather inappropriate “PAROLE GRANTED” or “PAROLE DENIED” stamp, like in a proto-Judge Judy) the emotional resonance of the film’s contents prevails. 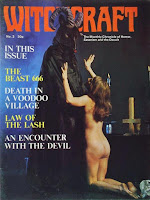 The Occult: An Echo from Darkness (Color, 1972, excerpt)
A documentary on the rise of occult practices and Satan worship amongst the hippie generation, this dark magic doc takes us right to our front doors with a glimpse into the occult stores and ceremonial rituals of San Franciscan Satanists as well as discussions with scholars and hippies alike.

People's Temple San Francisco Footage (B+W, 1960s)
See ultra-rare news footage of San Francisco-era Jim Jones and the People's Temple shortly after their church had been set fire to.  They protest with signs and Jim asserts that they are being persecuted for their fervent beliefs. 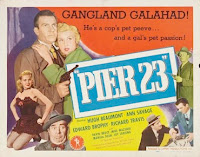 Flesh and Leather (B+W, 1951)
The first half of a two-part film titled Pier 23, this tasty little San Francisco pocket-noir has all the right ingredients: the rigged boxing match, the alcoholic professor, the slitheringly sexy femme fatale, the meat-headed/ham-fisted henchman, and, of course, the quick-talking, morally ambiguous, Marlowe-like amateur detective, who finds himself smack in the middle of a frame.  Hugh Beaumont plays our snappy detective, who would go on, only a few years later, to play the far more wholesome father, Ward Cleaver, in TV’s Leave it to Beaver.  Here, however, you’ll get to see him wheelin’-and-dealin’ in the seedy underbelly of our own San Francisco. 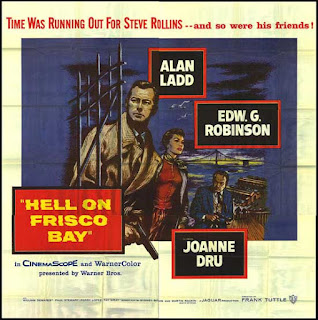 Hell On Frisco Bay  (1955, color - excerpt)
No show about San Francisco is complete without a noir featuring the famed Edward G. Robinson, Alan Ladd and Joannne Dru.  A man seeks vengeance after being falsely imprisoned set-up by an unknown enemy.  Set in the city by the bay and featuring every motif known to noir, the opening of this film is sure to revive your sense of intrigue that defines what it is to be literally so close to your dreams yet still fathoms away.

Oddball Films is a stock footage company providing offbeat and unusual film footage for feature films like The Nice Guys and Milk, documentaries like The Black Panthers: Vanguard of the Revolution, Silicon Valley, Kurt Cobain: The Montage of Heck, television programs like Transparent and Mythbusters, clips for Boing Boing and web projects around the world. To search through over 20,000 clips of our unique footage, check out our website at http://www.oddballfilms.com/.Our screenings are almost exclusively drawn from our collection of over 50,000 16mm prints of animation, commercials, educational films, feature films, movie trailers, medical, industrial military, news out-takes and every genre in between. We’re actively working to present rarely screened genres of cinema as well as avant-garde and ethno-cultural documentaries, which expand the boundaries of cinema. Oddball Films is the largest film archive in Northern California and one of the most unusual private collections in the US. We invite you to join us in our weekly offerings of offbeat cinema.
Email ThisBlogThis!Share to TwitterShare to FacebookShare to Pinterest
Newer Post Older Post Home