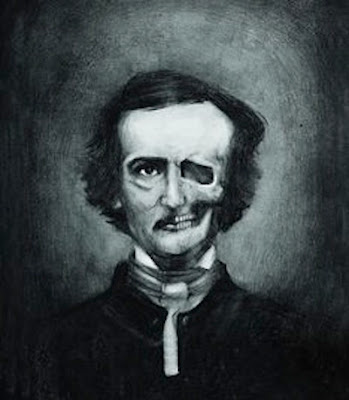 Oddball Films is kicking off the haunted month of October with Nevermore: The Horrific Tales of Edgar Allan Poe, a ghastly evening of rare 16mm short films and animation based on the Gothic novels and short stories of the grandfather of modern horror: the inimitable Edgar Allan Poe. We begin the night with trailers for two classic Hollywood adaptations: Roger Corman's House of Usher (1960) starring Vincent Price, and Phantom of the Rue Morgue (1954) with Karl Malden. Veteran actor Monty Woolley brings to life the claustrophobic Cask of Amontillado (1954) in a short but chilling rendition. Ray Bradbury heralds the writer and the tradition of the Gothic literary movement in A Discussion of the Fall of the House of Usher (1975). Czech animation legend Jan Svankmajer breathes new death into The Fall of the House of Usher (1980, video) utilizing disorienting camera angles and visceral claymation. Grief takes wing in the breathtaking optically printed animation The Raven (1978) featuring the engravings of Gustave Dore. The melancholic love poem Annabel Lee (1971) evokes more ghosts of lost love. Guilt sends one man into the grip of madness in the haunting adaptation of The Tell-Tale Heart (1971). Plus, a puppet of Edgar Allan Poe weighs in on The Strange Case of the Cosmic Rays (1957) in an excerpt from Frank Capra's Bell Science Special and show up early for a pre-pubescent Anthony Michael Hall starring in an ABC Weekend Special The Gold Bug (1980). Drive your hearse down to Oddball and get your October started with a fright! 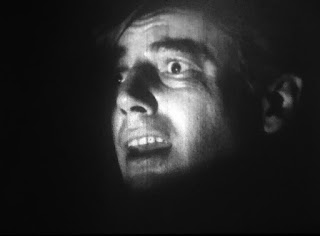 Based on Edgar Allan Poe's short story of the same title about Montresor, an Italian nobleman, who, having been insulted by Fortunato, plots revenge full of terror in the chamber where the prized Amontillado wine is supposed to be. From a short lived series called On Stage with Monty Woolley.

A Discussion of The Fall of the House of Usher (Color, 1975)
Science Fiction superstar Ray Bradbury discusses not only the seminal work by Poe, he also delivers a history of the Gothic novel and illuminates Poe's influence on horror and science fiction to the present.

An unnerving rendition from Jan Svankmajer combining live action, stop-motion and clay animation, but no actors. A dark study in visceral and tactile terror, this is a stark and unsettling experimental horror story from one of the most imaginative auteurs in the world. 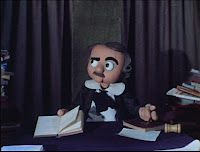 The Strange Case of the Cosmic Rays (Color, 1957, excerpt)
Dr. Research and Mr. Fiction Writer try to enter a mystery-writing contest judged by an esteemed panel of marionettes (Edgar Allan Poe, Fyodor Dostoevsky, and Charles Dickens) with the mysterious scientific phenomenon of Cosmic Rays. Between 1956 and 1964, AT&T broadcast nine hour-long television specials that sought to make science entertaining and palatable for children with engaging characters, humor and breathtaking animation. Legendary film director Frank Capra produced the first four films of the series, and directed the first three. They all have interesting religious undercurrents, an insistence from Capra. The live-action stars were Frank Baxter as Dr. Research and Eddie Albert as Mr. Fiction Writer. The two have a magic screen that allow them to explore the scientific mysteries of the universe. 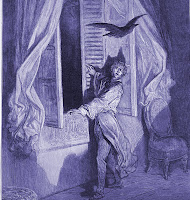 Annabel Lee (Color, 1971, Arthur Evans)
Edgar Allan Poe's tragic love story is recited over the haunting image of a young girl forlornly walking an empty beach.  As the words circle back upon themselves, so do the waves, and with deft editing, so do the fragmented images of the ghostly memory of lost love. Directed by Arthur Evans, music by Les Baxter (who also scored Roger Corman's Poe adaptation The Pit and the Pendulum). 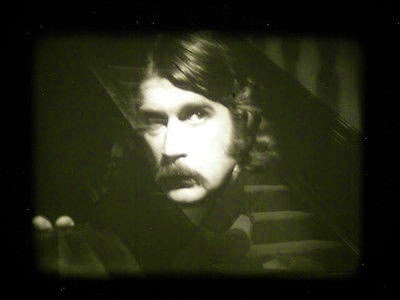 The Tell-Tale Heart (B+W, 1971)
Arguably the best film adaptation of Edgar Allan Poe's notorious tale of murder and conscience, this film made in 1971 features a moody noir-like quality in stark black and white. Directed by Steve Carver for AFI. 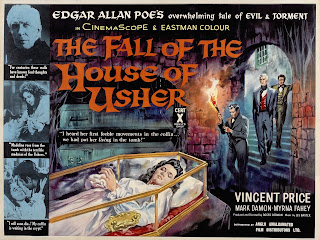 A teaser trailer for the Vincent Price/Roger Corman classic with some great B-grade special effects.

Directed by Roy Del Ruth and starring Karl Malden and Claude Dauphin.  In France in the 1870s, a string of strange murders happen in the Rue Morgue. The authorities are baffled, but they do have one man who may have the answers, Prof. Dupin.  When Dupin is approached by the police to help, he agrees. Soon a set of suspects are found, including a sailor named Jacques and a professor named Marais, who is involved in unauthorized (and bizarre) animal experiments. 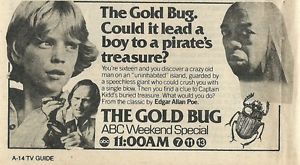 The Gold Bug (Color, 1979)
A cheesy ABC Weekend Special starring a very young Anthony Michael Hall and directed by Robert Fuest (Abominable Mr. Phibes). A young boy on a supposedly deserted island finds a gold bug and a piece of paper containing a secret code. He encounters a crazed old man and his towering mute servant who are searching for Captain Kidd's buried treasure.