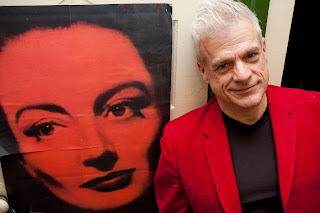 Oddball Films would like to invite you to our new Seasonal Seminar Series. We'll be opening the vaults of our incredibly unique stock footage company and film archive and inviting intriguing professional personalities to share their unique insights in various realms of cinema for filmmakers, post-production professionals and students inside San Francisco’s strangest film archive and microcinema.   Our first guest, Marc Huestis is a cultural institution and a living local legend.  An award-winning filmmaker, festival organizer, and presenter, Huestis is a larger than life camp icon. He will be on Oddball’s cine-stage divulging his dirty secrets of underground filmmaking centered around his cult masterpiece Whatever Happened to Susan Jane? (1982). The film utilizes the 1950s social guidance film The Outsider to hilarious effect in its flash back sequences, recontextualizing the didactic mental hygiene short into a campy nostalgia-fest. It's also an opportunity for students and professionals to tour a working film archive and to see the ins and outs of the exciting world of stock footage, film restoration, digitization and screening. This warehouse of celluloid delights is the home to over 50,000 tins of actual, tactile film, from 8mm to 16mm to 35mm; from feature films to educational shorts, military training films, antique erotica, ephemeral films, ethnographic pieces, commercials, and animation. Oddball Films has provided unique stock footage for projects like Transparent, Going Clear, Behind the Candelabra, Milk, Mythbusters, Boing Boing, and more commercials, documentaries, music video, feature films and television worldwide. In today's world of digital media, most college students won't even remember film as a medium, despite its long and glorious history and its potential to survive long beyond any digital media type. This is a chance to re-instill a love of the original moving picture format in the next generation of media makers, as well as demonstrate one of the many facets of the production world that often goes unnoticed.

Notes from Marc Huestis:
When returning from another stoned out night at the Stud circa 1980, I noticed an open trash can on Haight St. overflowing with a cache of 16mm films. I snatched them up, planning to use them as "slug" (a term used for filler for editing purposes).  Out of curiosity, I decided to project a few. Most were junk, but within the stack lie an amazing cosmic find - a campy little chestnut entitled “The Outsider”. This 15-minute gem was produced by "Young American Films" who specialized in 50's educational shorts with "important" messages for budding teenage minds. These were the kind of films you were forced to view in 8th Grade Health Class as you were dodging spitballs lobbed at you by the jocks.

"The Outsider" turned out to be a trash masterpiece- a conformist cautionary tale. It followed the trails and travails of poor little "outsider" Susan Jane Smith - a reclusive high school student with bad skin, even worse hair, no friends, and zero self-esteem. Shot in stark black & white, it featured Ozzie and Harriet morality, John Waters style bad acting and absurdist voice of god narration. It inspired my first sync sound feature length film "Whatever Happened to Susan Jane?"  I used “The Outsider” as the backbone of the story, then fantasizing about the characters now grown up in wacky world of Punk Boho San Francisco.