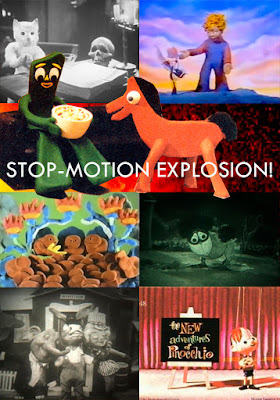 Oddball Films and curator Kat Shuchter bring you Stop-Motion Explosion!, a program of mind-blowing 16mm stop-motion animation from the 1930s to the 1990s. In a world saturated with CGI, Oddball Films opens the vaults to celebrate when historical, fantastical and anthropomorphic creatures were hand-sculpted and manipulated into “life.” This program features stop-motion heavy-hitters Ray Harryhausen, George Pal, Rankin/Bass, Art Clokey, Will Vinton, Jiri Trnka, Hermann and Ferdinand Diehl, and Eliot Noyes Jr., with tons of new finds and a few all-time favorites. Blast off with everybody's favorite green clay boy when Gumby and Pokey go in search of The Small Planets (1957). Claymation master and Oscar winner Will Vinton gives us the breathtaking tale of The Little Prince (1979). Puss in Boots (1940) is a gorgeous puppet animation by the Diehl brothers and funded with Nazi money. Oscar nominated Eliot Noyes Jr. creates a parable of gender equality with little clay creatures in The Fable of He and She (1974). The National Film Board of Canada and Pierre Trudeau sculpt paper into the puppet of a young boy tormented by his parents' bickering and lost in an imaginary world of clowns and robots in Enfantillage (1990). Special effects wizard Ray Harryhausen brings us a cheeky interpretation of Mother Goose Stories (1946). Pinocchio gets a shot at the Hollywood life in Rankin/Bass' Ring-A-Ding-Ding Pinocchio (1960). Czech visionary Jiri Trnka animated one boy's need to ever-increasing speed in Passion (1961). Plus, a 1958 Voting PSA with anthropomorphic donkey and elephant puppets, The Early Bird Gets the Worm (1930s) an amateur rarity, and a snippet of George Pal's Shoe Shine Jasper (1947). Come early to see when A Lunchroom Goes Bananas (1978). It's a night one million minute movements in the making! 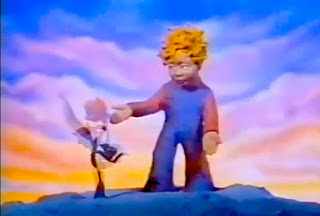 
The Little Prince (Color, 1979)
Claymation master Will Vinton takes on the ethereal tale of the intergalactic boy prince in a world entirely made from clay.  Vinton coined the term Claymation and won an Academy Award for his short Closed Mondays (1974) and took claymation to new commercial heights with the California Raisins and the Dominos Noid before being edged out of his own company by his deep pocket investors. An Oddball premiere! 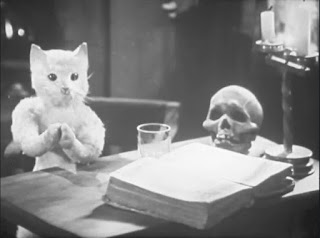 Puss in Boots (1940, B+W,  AKA Der gestiefelte Kater)
A stop-motion puppet fairytale made in Nazi Germany by the Diehl Brothers. Gorgeous hand-crafted puppets tell the tale of a little cat who gets all fancied up to bring fame and fortune to his owner. The Diehl Brothers Hermann and Ferdinand (with the help of other brother Paul) ran Germany's most successful puppet animation studio from the 1920s-1970s and are best remembered for The Seven Ravens (1938). This rare and beautiful film was funded by the Ministry of Enlightenment and Propaganda and imported to the US in 1958 with added narration by Encyclopaedia Britannica after the fall of the Third Reich. An Oddball Premiere! 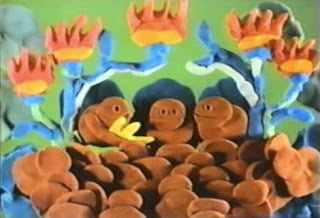 The Fable of He and She (1974, color)
Eliot Noyes Jr.  gained recognition via Academy Award nomination for his first animated work made at Harvard University,“Clay”.  From there he went on to push the genre with many more clay-mated works that reflect compassion toward humanity.  This short depicts the hardimars and the mushamels, clay species who suffer from gender-typed bias.  As they separate from each other and learn to do the things they once thought undoable, both kinds learn an important lesson.  Adorable, funny and engaging, this film is a great journey into sexual politics with a nice squishy center.

Enfantillage (Kid Stuff) (Color, 1990)
Pierre Trudeau’s film combines drawings and puppet animation conveying the effects of family discord on a small child. In the peace and quiet of his room, a boy draws at his desk, appearing not to notice the angry voices that intrude from the hallway. As his parents' quarrel escalates, however, resentment invades the child's tranquility. The figures he has drawn spring to life. In a lonely and desolate landscape, the clown and robot engage in combat. The music intensifies and the distraught child is spun on a carousel that expresses his rage and revolt. No one hears his muted cry. When calm again descends on the household, all that remains to remind one of the recent conflict is a blackened sheet of paper. 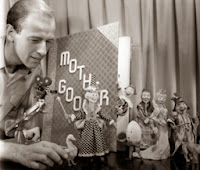 Mother Goose Stories (Color, 1946, Ray Harryhausen)
Before his career as one of the leading special effects wizards of Fantasy film (including animating the infamous skeleton army from Jason and the Argonauts), Ray Harryhausen animated a series of gorgeous Kodachrome fairy tales.  His first of these includes the tales of Little Miss Muffett, Old Mother Hubbard, Queen of Hearts and Humpty Dumpty with expertly crafted puppets in glorious (and beautifully preserved) color. An Oddball premiere! 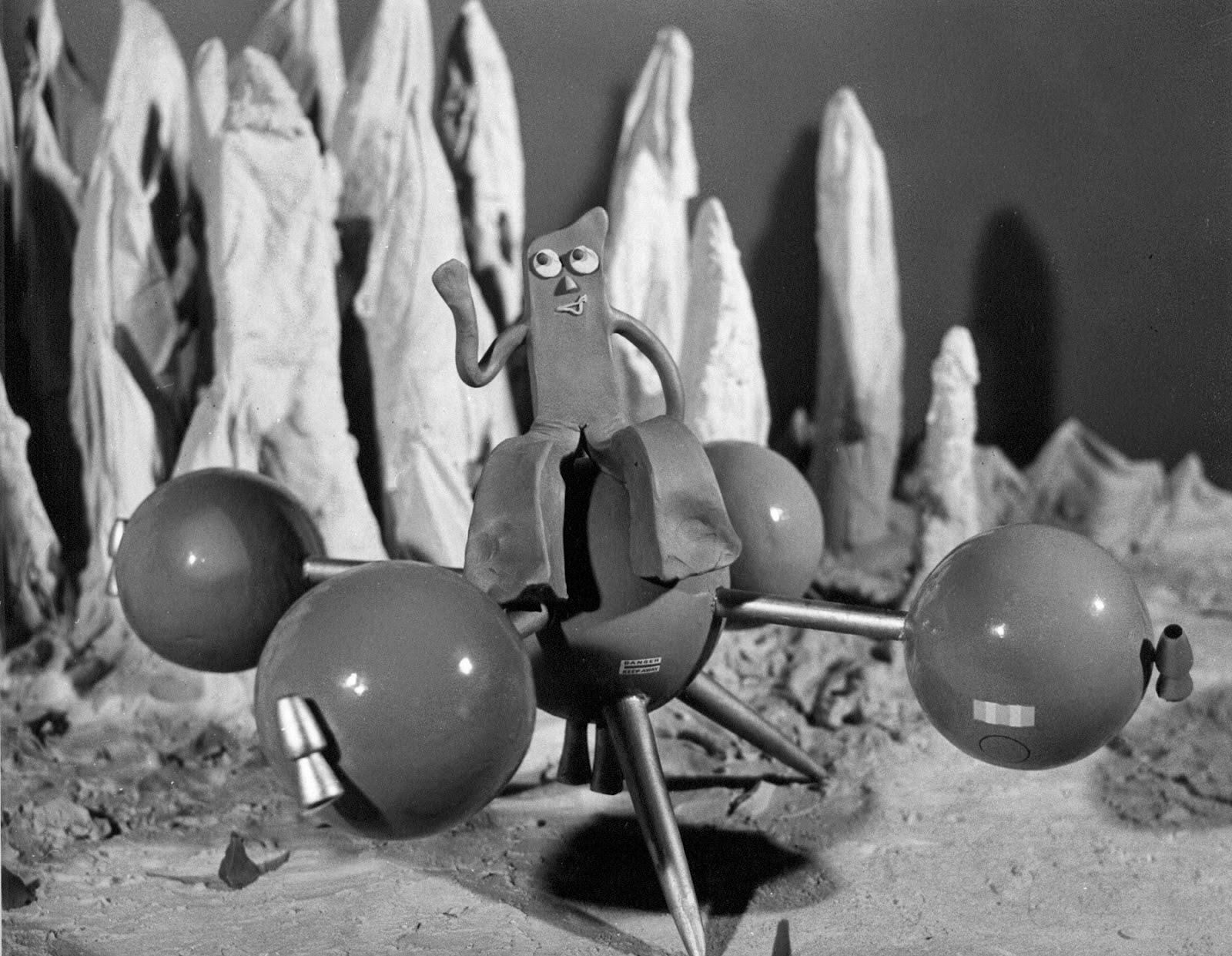 Ring-A-Ding-Ding-Pinocchio (Color, 1960)
One of the New Adventures of Pinocchio from beloved stop-motion legends Rankin and Bass - the men behind everyone's favorite stop-motion holiday classics. In this updated fairy-tale, Pinocchio goes to Hollywood and gets sucked in by a smooth talking fox.

Both Democrats and Republicans agree that politics are easier to swallow when sang about by adorable puppets. Sexy Auntie Samantha gets the Donkey and the Elephant together to sing about voting and the all pledge to take to the polls in November. An Oddball premiere!

The tale end of a Puppetoon from special effects and sci-fi wizard George Pal. This overtly racist caricature of a little black boy - Jasper- was a popular character in the Puppetoon universe but is now considered a blight in Pal's illustrious career. An Oddball premiere! 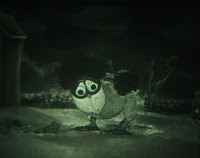 The Early Bird Gets the Worm (B+W, 1930s)
A delightful untitled uncredited stop-motion animation discovered in a reel of home movies. A little bird tries to coax a worm out of the ground for breakfast. An Oddball premiere!


A boy grows up with a need for speed.  Like a dare-devil, he speeds his bicycle past the girls, eventually graduating to hot rods and motorcycles; all the while getting into more and more dangerous situations.  Hip and stylish, this beautiful puppet animation is both a charmer and a stunner! 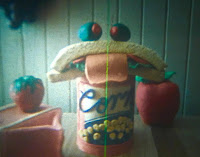 
Describes how the food in Plumcrest School Cafeteria has gone on strike (with the help of clay animation) to protest the poor lunchroom manners of children. After Banana issues an ultimatum, the students take some positive steps toward better lunchroom manners. 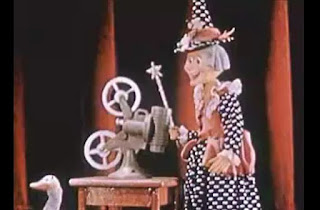