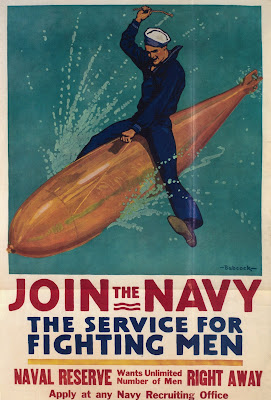 In honor of Veteran's Day, Oddball Films presents Hey Sailor! Antique Naval VD, Training, and Ephemeral Films, a program of short films and cartoons from the 1930s-1950s centered on those brave fighting seamen who sailed the seas of yesteryear. We've got VD scare films, awkward enema lessons, Popeye cartoons, sailor chimps, musical numbers, and naked sailors galore, all on original 16mm film from our massive stock footage archive.  We're declassifying two homoerotic rarities from the US Navy: dozens of naked sailors go full frontal for their medical exam and a hands on posture lesson in Bluejackets Personal Hygiene (1943) and get down and dirty in the infirmary with an uncomfortable excerpt of Giving an Enema (1944). Check your privates, private in the Navy training film The Pick-Up (1944), starring an unlucky schmuck who picks up a nasty case of the clap just in time for his furlough. More sailors make a sucker's bet on a game of poker and some loose women in One a Minute (1944). What sailor program would be complete without a Popeye cartoon, and on that note we bring you an original Fleischer brothers short: In the Army Now (1936) when Popeye and Bluto show off their greatest hits when Olive Oyl declares her love for a man in uniform. Shorty the Chimp dons his sailor cap and heads to the high seas in Chimp the Sailor (1950). Plus, a boatload of 1940s Sailor Soundies including Heaven Help a Sailor and the bizarrely hulatastic Little Grass Shack, excerpts from Swim and Live (1944) double projected with Vintage Beefcake footage and more naval surprises for the early birds! 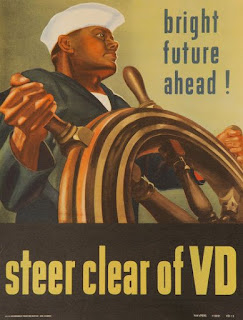 
The Pick-Up (B+W, 1944, excerpt)Watch out for loose women at the dance hall, soldier, you might miss your furlough before you ship out!  A WWII army training film on the horrors of venereal disease. Corporal John Green is anxiously awaiting his furlough when he meets a dame he thinks is a "nice girl" until he ends up with with a nasty dose of the clap.  Looks like he'll be heading to the infirmary instead of on vacation!

Giving an Enema (B+W, 1944, excerpt)
Of all the instructional films the US Navy has made Giving an Enema is no doubt the weirdest and most hilarious. If you can find anything stranger than a crash course in how to inject water into another man’s rectum let us know. Don’t worry-you’ll be seeing an abbreviated version not the entire 22 minute film!

Bluejackets Personal Hygiene (B+W, 1943)Get unclassified with this naval training film featuring dozens of naked sailors!  That's right, these brave boys in blue reveal much more than their courage, we get to see all their artillery.  Learn about proper care of feet, posture, teeth, wardrobe and an all important lesson in group showering! All the homoerotic tension you could dream of and vintage beefcakes galore! 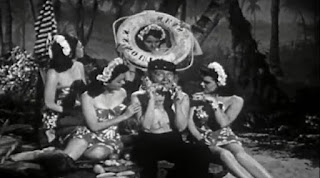 Sailor Soundies (B+W, 1940s)
The precursor to the music video, the Soundie was a short musical film made in the 1940s, often featuring singing and dancing in under 3 minutes. They were distributed to be played on specialized jukeboxes in night clubs, bars and amusement parks.

Heaven Help a Sailor- Featuring The Seven Sarongs
Two sailors  get rejected by the girls they’re sitting with in a bar. A pal sailor saunters up and tells them a story about crashing on an island of beautiful girls. We see the old sailor covered in tattoos surrounded by beautiful island women.

You've Got Me Guessing - Don Kennelly & Robert Williams
A musical sailor visits with a beautiful woman and sings with his pals.

Little Grass Shack
A goofy sailor plays the ukelele and sings about the ladies of Hawaii, all the while an overly-aggressive hula dancer tries to seduce him into dancing with her. 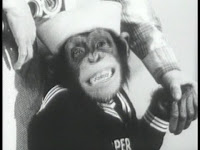 Chimp the Sailor (B+W, 1950)
Shorty the chimp livens things up his first day at the beach, when he slips off to the pier and manages an adventurous boat ride. 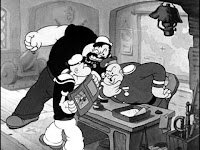 Popeye the Sailor: In the Army Now (B+W, 1936 Dave Fleischer)
Popeye and Bluto are at it again! When Olive Oyl declares her love for a man in uniform, the superfoes must battle it out for the last placement in the Navy. After getting into fisticuffs, they each share a scrapbook of some of their best moves with the recruiting officer.  Who will win the recruitment and Olive's heart? 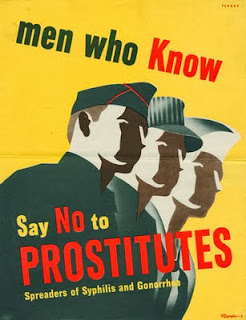 One a Minute (B+W, 1944)
A poker game  provides the metaphor  for US Navy sailor-saps on shore as they  “take a chance” with the VD-infected hostesses at the Kit Kat Club. “The only way to cover that sucker bet is to use provalactics” spouts the doctor. Don’t miss the pretty girls do their “perp walk” as their std tests are announced. The shame! 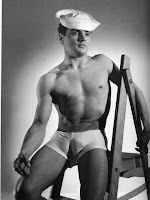