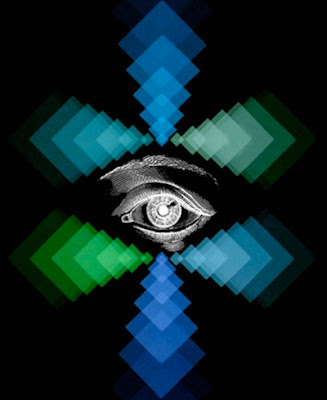 Oddball Films presents Strange Sinema, a monthly evening of old finds, rare gems and newly discovered films from the stacks of the archive. Drawing on his collection of over 50,000 16mm film prints-the largest archive in Northern California, Oddball Films director Stephen Parr has compiled his 106th program of offbeat, quirky, experimental outtakes and unusual films. Strange Sinema 106: Computeresque: Experiments With Light + Technology, a program of films examining the early use of light and computers in cinema featuring pioneers of computer-generated art. The centerpiece of the program is based around a selection of Whitney films, innovators of cinematic computer technologies featuring motion graphics pioneer John Whitney Sr. and brother James and son Michael's work, all profoundly audacious and inspiring in their fluidity, motion and spiritual subtext. John Whitney created some of the first computer-generated animation and motion graphics and Catalog (1961) is his remarkable demo reel of work created with his analog computer/film/camera machine he built from a WWII anti-aircraft gun sight. We follow that with Whitney’s Arabesque (1975), a legendary masterpiece of shimmering, oscillating waves set to the music of Persian composer Maroocheher Sadeghi. Experiments in Motion Graphics (1968) once again features early computer motion graphics by John Whitney and a discussion of the computers prospect as an art making tool. Michael Whitney's Binary Bit Patterns (1969) is a hypnotic psych-folk audiovisual experience that suggests a secret symbiosis between the digital and the organic as various Eastern graphic permutations appear, dissolve and undergo metamorphoses on the screen. Lapis (1965), made by a spiritualized James Whitney (one of only 7 films he created) and one of the most accessible experimental films ever made; Lapis was created with handmade cels evoking a single mandala moving within itself; its particles surge around each other in constant metamorphosis. Various other computer innovators include Gary Demos, the special-effects guru behind Tron and Futureworld who creates a mesmerizing light show in I Had an Idea (1972), the first computer generated music video, Joni Mitchell's Both Sides Now (1972) from animator and Oscar winner John Wilson, Perspectrum (1974), directed by famed Indian animator Ishu Patel with koto music by Michio Miyagi, this animated short conveys a kaleidoscopic sense of perspective, and Dragonfold and Other Ways to Fill Space (1979) created on the Tektronics 4051 Graphics Terminal by Brooklyn filmmakers Bruce and Katharine Cornwell this brilliant computer-generated animation synchronized to rock music provides an introduction to the idea that a one-dimensional line can fill two-dimensional space, Peter Foldes and the National Film Board of Canada bring us the first short made entirely out of computer-generated animation Hunger (1973); a dazzling and dark nightmare of metamorphosing images that gives new meaning to "eat the rich", and Incredible Machine (1968) from Bell Labs, this film previews early developments in computer-assisted imagery, electronic music, and voice processing. Plus! Hypothese Beta (1967), an Academy Award nominated film featuring an isolated computer punch card who creates chaotic and deadly disorder!

Arabesque (Color, 1975)
John Whitney‘s Arabesque, is considered by many to be the seminal computer film.  Set to the music of Manoochelher Sadeghi, and created during a residency at IBM Whitney balanced science with aesthetics as he experimented with the eccentricities of Islamic architecture creating whirling, exotic flows of computer generated images. Arabesque was one of the first computer generated films that married technology and art is a focused, cinematic manner. Working with his early home-made computerized motion-control set-up, Whitney could produce a variety of innovative designs and metamorphoses of text and still images, which proved very successful in advertising and titling of commercial projects. He also did various commercial assignments including the title design for Hitchcock's feature Vertigo  (in association with Saul Bass), and the preparation (in association with Charles Eames) of a seven-screen presentation for the Buckminster Fuller Dome in Moscow. 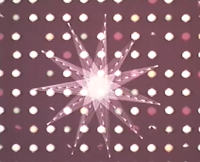 John Whitney, Sr., legendary American animator, composer and inventor, is often considered the father of computer animation. In this early profile, he expounds on the process and philosophy behind his pioneering work at IBM and demonstrates some of the fundamental concepts of motion graphics.

Binary Bit Patterns (Color, 1969) The spectacular, fast-paced film features quilt-like tapestries of polyhedral and crystalline figures pulsating and multiplying with a kind of universal logic eliciting a hypnotic, trancelike effect from the viewer. This film echoes a preoccupation with the mandala image and the interest in Eastern meditative philosophy that is seen in the work of the whole Whitney family. Employing computer generated imagery with optically introduced color and flicker effects, Michael Whitney creates a hypnotic, psych-folk audiovisual experience that suggests a secret symbiosis between the digital and the organic as various Persian inflected graphic permutations appear, dissolve and undergo metamorphoses on the screen. With original sound-score.

This film, by film pioneer James Whitney consists entirely of dot patterns. Like a single mandala moving within itself, the particles surge around each other in constant metamorphosis, a serene ecstasy of what Jung calls "individuation." For 10 minutes, a succession of beautiful designs grows incredibly, ever more intricate and astounding; sometimes the black background itself becomes the pattern, when paths are shunned by the moving dots. A voluptuous raga soundtrack by Ravi Shankar perfectly matches the film's flow, and helped to make LAPIS one of the most accessible "experimental films" ever made.
The images were all created with handmade cels, and the rotation of more than one of these cels creates some of the movements. John Whitney Sr. had built a pioneer computerized animation set-up—the prototype for the motion-control systems that later made possible such special effects as the "Star Gate" sequence of 2001. James used that set-up to shoot some of his handmade artwork, since it could ensure accuracy of placement and incremental movement.

I Had An Idea (Color, 1972)
Relic of a revolution? The swirling tubular patterns and bright, optimistic colors still evoke the freshness of the once-new medium. From Gary Demos, one of the pioneers in the field of computer-generated special effects, who was involved in four of the earliest movies to rely on computers to dazzle viewers: Futureworld, Looker, Tron, and The Last Starfighter.

Both Sides Now (Color, 1972)Pioneering computer animation from John Wilson, whose career started in the late 1940’s (winning Oscars for Gerald McBoing-Boing and Toot, Whistle, Plunk, Boom-an Oddball favorite). This short was the first computer generated music film and was produced for and aired on the Sonny and Cher TV show. The song is Both Sides Now by the great Canadian chanteuse Joni Mitchell.

Dragonfold and Other Ways to Fill Space (Color, 1979)

Various geometric phenomena (the Sierpinski curve, tessellation) are illustrated on-screen in this computer-animated educational film synchronized to rock music providing an introduction to the idea that a one-dimensional line can fill two-dimensional space. Bruce and Katharine Cornwell are primarily known for a series of remarkable animated films on the subject of geometry. Created on the Tektronics 4051 Graphics Terminal, they are brilliant short works, tracing geometric shapes to intriguing music, including the memorable 'Bach meets Third Steam Jazz' musical score in ‘Congruent Triangles.’ Their work, distributed by the defunct International Film Bureau, is now out of distribution.

The crew from pioneering research facility at Bell Laboratories demonstrates novel uses of the computer in audio-visual communication research: computer generated graphics; computer-assisted design of an electronic circuit drawn with a light-pen on a cathode-ray tube; simulation of human speech and singing; and composition of music and of abstract or figurative color pictures and animation films.

Hypothèse Beta (Color, 1967)
An Oscar-nominated French filmed animation from director Jean-Charles Meunier, which deals with an isolated computer punch card perforation who tries to join groups of well-behaved perforations, is rebuffed, and finally manages to create complete disorder. Remember punch cards? Neither do I.

For more info about Bruce and Katharine Cornwell’s work: http://www.afana.org/cornwell.htm

San Francisco's strangest film archive and microcinema, Oddball Films is a stock footage company providing offbeat and unusual film footage for feature films like The Nice Guys and Milk, documentaries like The Black Panthers: Vanguard of the Revolution, Silicon Valley, Kurt Cobain: The Montage of Heck, television programs like Transparent and Mythbusters, clips for Boing Boing and web projects around the world.Our screenings are almost exclusively drawn from our collection of over 50,000 16mm prints of animation, commercials, educational films, feature films, movie trailers, medical, industrial military, news out-takes and every genre in between. We’re actively working to present rarely screened genres of cinema as well as avant-garde and ethno-cultural documentaries, which expand the boundaries of cinema. Oddball Films is the largest film archive in Northern California and one of the most unusual private collections in the US. We invite you to join us in our weekly offerings of offbeat cinema.