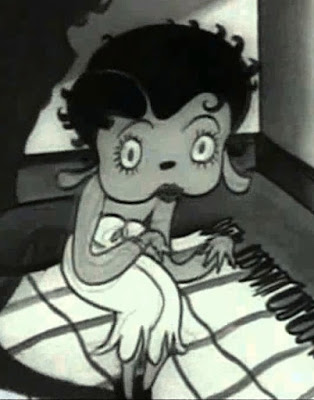 Oddball Films and curator Kat Shuchter bring you Pre-Code Betty Boopathon!, a program of 16mm cartoons from 1930-1934 from the Fleischer Brothers starring the original cartoon sexpot and the most popular female cartoon character of all time: Betty Boop. Dave and Max Fleischer were true animation pioneers; the first to introduce sound in animation and creators of rotoscoping (tracing human movement from film) as well as the originators of Popeye, the first Superman cartoons and more. They also introduced the world to one of its sexiest and most beloved cartoon heroines ever. The Betty Boop cartoons are incredibly imaginative, sexy, surreal, and possess the spirit of the Jazz Age with a kooky and spooky edge. "Born" in 1930 as a dog lady singing in a Bimbo the dog cartoon, Betty eventually evolved over the next few years into not only a human woman but also from an unnamed bit player into the star of dozens of cartoons. In 1934 Betty's appearance changed again - thanks to the Hayes Morality Code - that forced her to raise the bustline on her dress and lower its hemline. Betty fell out of favor in the late 1930s but continues to inspire and amuse over 80 years later. The evening's selections include Mysterious Mose (1930) one of Betty's earliest incarnations as a dog - who keeps losing her nightgown to a horny ghost; she keeps dropping her top for Bimbo the rag man in Any Rags? (1931) which was also her final appearance as a dog; Betty Boop M.D. (1932) where she stars as a sexy snake oil salesman peddling a magic elixir with psychedelic effects; Betty Boop's Penthouse (1933) where a science experiment goes wrong and Betty captivates a monster with her charms; Red Hot Mamma (1934), the devil squares off against Betty and gets nothing but the cold shoulder; Betty sings her way into the heart of her Prince Charming (with the help of a risque makeover from her fairy godmother) in Poor Cinderella (1934); she sings for your vote in Betty Boop for President (1932); the great Cab Calloway teams up with the Fleischer Brothers and Betty Boop for a double dose of rotoscoped cartoons: Old Man of the Mountain (1933) and Minnie the Moocher (1932) including a spooky night of skeletons, ghosts and witches as well as the earliest footage of Calloway ever filmed. Betty hulas her heart out in nothing but a grass skirt and a lei in Betty Boop's Bamboo Isle (1932) with an authentic soundtrack by the Royal Samoans and rotoscoped hula moves. Betty shows off her flapper moves as she teaches a dance class in The Dancing Fool (1932). Plus, more 1930s cartoons for the early birds! Everything screened on 16mm film. 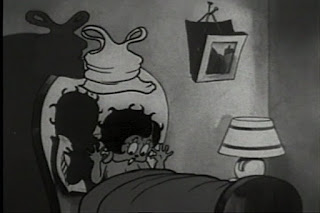 Mysterious Mose (B+W, 1930)
One of Betty's earliest incarnations when Betty still has the nose and ears of a dog before her transformation into a full-human. Bimbo is haunting Betty as she tries to sleep in bed. Mysterious figures, floating nightgowns, and plenty of ghostly incarnations scare Betty out of bed and into the spooky arms and charms of ghost Bimbo. Print on loan from Zach Von Joo.

Betty Boop's Penthouse (B+W, 1933)
Betty charms a Frankensteinesque monster in her rooftop garden.  Betty is living across from Bimbo and Koko's mad science factory where the dog and clown are doing strange experiments in pigmentation of cats. When the pair head to the window to gawk at the lovely Betty watering her flowers, the lab cat heats a mysterious potion that creates a fearsome hulking monster heading straight for Miss Boop. Everyone is shaking in their boots (and the flowers even jump out of their own skin -revealing skeletons for some reason) but Betty stays calm and wins over the monster with her perfume. Print on loan from Zach Von Joo. 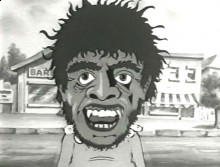 Betty Boop M.D. (B+W, 1932)
Betty and the gang are snake oil salesmen for a new wonder tonic: Jippo. This magic elixir makes skinny men fat, old men turn into giant babies, babies turn into tiny old men, skeletons leap out from bodies, babies tranform into Wolfmen and more of the craziest site-gags to come around before the invention of LSD. Print on loan from Zach Von Joo. 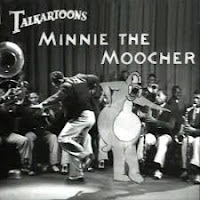 Minnie the Moocher (B+W, 1932)
After a fight with her folks, Miss Boop runs away from home, and all its surreal comforts -- and takes Bimbo with her! Taking refuge in a hollow of a tree, they encounter ghostly beings! Cab Calloway and his band provide most of the short's score appear in a live-action introduction. The thirty-second live-action segment is the earliest-known film footage of Calloway, whose gyrations were rotoscoped for the spooky, singing walrus. 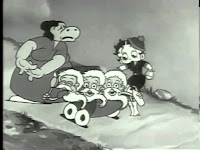 Old Man of the Mountain (B+W, 1933)
Another Betty and Cab pairing to prove she was the jazz baby for the ages! When you want a strong female lead, authentic jazz soundtracks and hyper-surreal imagery, you need look no further than the Fleischer brothers, and this classic does not disappoint.

Betty Boop's Bamboo Isle (B+W, 1932)While not the most racially sensitive Betty Boop cartoon, this nonetheless fun Fleisher Brothers animation features music by the Royal Samoans and Betty Hula dancing before the natives get restless.  Betty's authentic dancing was rotoscoped from performances by native dancers.  Rotoscoping was a technique pioneered by the Fleischers in which they would trace the body movements from a human subject onto the animation cell to achieve the most realistic movement and proportion of their cartoon characters. 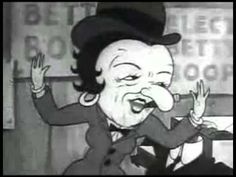 Betty Boop For President (B+W, 1932, excerpt)
Betty runs for the office of President against Mr. Nobody while parodying real candidates. Both candidates state their platform through song and dance, referring to political issues of the time. The House of Representatives is portrayed by elephants and asses-just like they are in real life!
Betty sings: “Oh, when I'm the president, When I'm the president, I'll give you all a great big kiss, When I'm the president!” We see Times Square with billboards proclaiming that Betty Boop has been elected; there are fireworks and a tickertape parade.

The Dancing Fool (B+W, 1932)
Bimbo and Koko are sign painters hired to paint the lettering on the window of “Betty Boop’s Dancing School". Inside Betty teaches her friends how to shake their tail feathers to the tune of "Dancing to Save Your Soul." This cartoon provides us with a glimpse of the kind of dancing and outfits that would be banned from Betty’s cartoons only two years later. 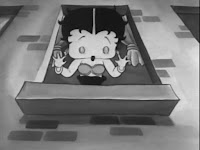 
Bimbo, the ragman has got eyes for Miss Betty and if he can make enough money from auctioning off people's trash, he just might win her heart. Technically the last appearance of Betty as a dog and also as Bimbo's love interest. Just weeks after this cartoon Betty was made into a full-fledged human and Bimbo was kicked into the "friend zone."  Watch for Betty's Pre-Code Wardrobe Malfunction!

A (sadly) black and white print of Betty Boop's only cartoon in color.  A delightfully imaginative musical version of the classic fairy tale includes a risque transformation of Cinderella, stripping her down to her skivvies before dressing her up for the ball.