Oddball Films presents Crazy Cats! - The Cat Came Back. This evening of crazy cats includes shorts films starring cats, about cats, and people dressed as cats!  Highlights include: The Incredible Cat Tale (ca. 1960), a live action cat adventure from Hungary; The Perils of Priscilla (1969), a neglected pussy sets out on her own and hits the big city; Of Cats and Men (1968), an animated history of Felis Cattus Domesticus; the sinister side of felines in Superstition of the Black Cat (1934); The Cat’s Meow (1976), hilarious educational short was the surprise hit of our previous program; plus Busby Berkeley, Felix The Kat, The Fabulous Cat Girl burlesque and much more! 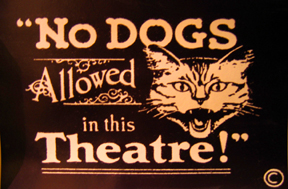 The Incredible Cat Tale (Color, c.1960)
This beautiful and heartwarming film from Hungary is the story of one incredible cat that will stop at nothing to be reunited with her kittens.  A young boy and girl set off in their horse drawn cart unwittingly carrying her newborn kittens.  It’s momma cat to the rescue!  Rivers, cat-trapper/fur skinners, merry-go-rounds, vicious dogs and long distances are no match for this cat.  I had no idea you could train a cat to do anything, let alone the amazing feats you will witness here.

The Perils of Priscilla (Color, 1969)
A poor, neglected pussy has to head out on her own when she is ignored and neglected by her family.  This live action short directed by Carroll Ballard (who went on to direct The Black Stallion, Never Cry Wolf, and was 2nd Unit Director of the original Star Wars) features another amazing cat trying to make her way in a tough world.  What will become of the adventurous, resilient Priscilla?

Of Cats and Men (Color, 1968)
Technicolor Disn*y animation traces the history of the domesticated cat- from deity-worthy reverence, rat-catching respect, to superstition and fear, and today’s mix of feelings…

The Cat’s Meow (Color, 1976)
Engaging, well-shot educational film about alley cats and house cats was the surprise hit of the original Crazy Cats! program.  The deadpan, dry humor of the narration is a big part of the appeal of this British-made short, but the slow motion mouse acrobatics had the whole room in stitches. Oddball recently acquired a new, high quality print of this little gem.

Superstition of The Black Cat (B+W, 1934)
Comical history of the origin of the superstition of bad luck when a black cat crosses your path.