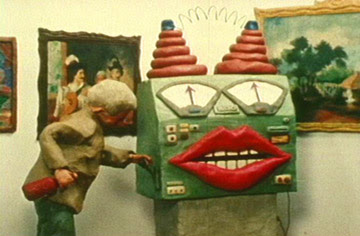 Oddball Films presents an evening of Lost Animation -rarely screened classics and obscurities of world animation. Most are quite scarce despite scads of accolades and international awards.  Films include: Claymation (1978), legendary clay animator Will (California Raisins) Vinton in the studio; The Romance of Transportation, whimsical Canadian animation from 1952 with a dynamic jazz soundtrack; Harold and Cynthia (1971); consumerist culture skewered; The Mole and The Rocket (1965), beautiful Czech cartoon for kids (and mid-century style-loving adults); Queer Birds (1967), bizarre and innovative metaphoric Czech animation; Closed Mondays (1974), brilliant claymation from Will Vinton; Boom (1974), more cold war jitters from Polish animator Bretislav Pojar; The Sword (1967), surprise hit from the Lost Animation Fest; Clay, or Origin of The Species (1965), the Oscar-winning claymation by Eliot Noyes, Jr.; PLUS! He Was Her Man, the banned 1937 Looney Tunes cartoon based on the old murder ballad “Frankie & Johnny”. 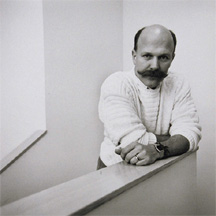 Claymation (Color, 1978)
Filmmaker Will Vinton and his staff of animators discuss the processes of clay animation, showing the mixing of colors, creation of characters, production and editing of the guide film, music scoring and the actual clay sculpture techniques.
The winner of an Academy Award, numerous television Emmys, and international animation awards numbering in the hundreds, Vinton used Claymation, a term he trademarked, to great effect in his early career and later bringing to life iconic advertising characters the California Raisins and M&Ms. 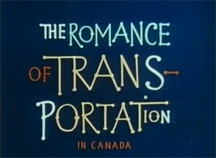 The Romance of Transportation (Color, 1952)


Directed by Colin Low, animated by Wolf Koenig and Robert Verrall and narrated by Guy Glover “Romance…” was the National Film Board’s first attempt at a UPA style of animation for an educational film. Despite the rather dry subject, it has generous humor a beautiful mid-century style, and features a great bop/cool jazz soundtrack by Eldon Rathburn.

Harold and Cynthia (Color, 1971)
Explores the impact of advertising on human beings by showing an ordinary man and woman whose attempts to establish a relationship are hindered by the contrived ideals espoused in modern advertisements. 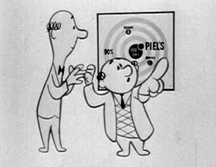 Clay or Origin of The Species (B+W, 1965)
Academy Award-nominated claymation short by Eli Noyes Jr.- a bizarre visual representation of Darwinism through clay.  Noyes worked for Sesame Street in the 1970s, where he produced the beloved Mad Painter series (he also designed the MTV logo).
The Mole and The Rocket (Color, 1965)
Tells a story about a little mole who is carried by a rocket to a deserted island in the middle of the ocean. Shows how the sea animals help repair the ruined rocket and go off in it with the mole. Non-verbal with a musical soundtrack by the Czech Symphony Orchestra. By Polish animator Zdenek Miler. 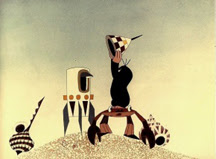 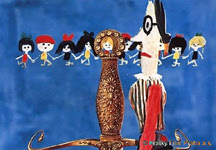 Boom (Color, 1974)
The global arms race as animated by the legendary Bretislav Pojar (Balablok). Takes a look at the history of aggression and the theory that might makes right. By extension, it carries us into the atomic and missile age, postulating various scenarios for planetary self-destruction, both planned and accidental. Without narration, using only sound effects and music, the film asks the question: is this THE END?

The Sword (Color, 1967)
This clever cutout animation was a special addition and surprise hit at the Lost Animation Fest- short and er… to the point, The Sword is allegory on the ignorance of people who enjoy their life to those who are suffering or dying at the very same instant. 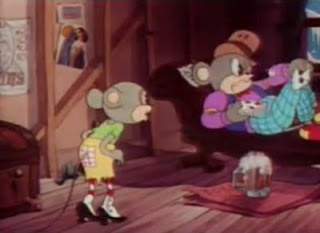 He Was Her Man, the banned 1937 Looney Tunes cartoon based on the murder ballad Frankie and Johnny. Brutal spousal abuse, infidelity and murder, set in a cheery depression-era urban icebox.
Email ThisBlogThis!Share to TwitterShare to FacebookShare to Pinterest
Newer Post Older Post Home