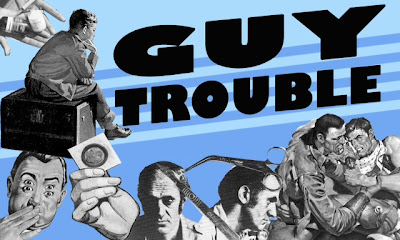 Oddball Films and guest curator Kat Shuchter bring you Guy Trouble, a program of vintage films designed to shed light on the tough lot of that underprivileged minority, Men. Some troubles start at birth, like Craig in He’s Mentally Retarded (1975).  Whereas from mere boys, guys are bombarded by threats of predators as seen in Boys Beware (1973) where we are taught that the homosexuality is a "sickness of the mind." They are subject to the horrible onslaught of puberty and all the awkward terror it encompasses, as actor Ken Howard and three young men he picked up for a camping trip, learn in Facts for Boys (1981). In High School the downtrodden gender must also face the pressures of measuring up and the belligerent side effects, as we discover in Benny and the 'Roids (1988). As men grow up, they are still not immune from everyday pressures or from threats of syphilis as the army teaches us in Sex Hygiene (1941), or from the often deadly after-effects of fun, like The Hangover (1978).  With plenty of man-centric commercials and trailers, this is one testosterone filled night to start Pride weekend off balls deep! 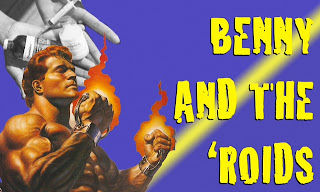 
Facts for Boys (Color, 1981)
“Changing from a boy to a man is a one way trip.  I’m Ken Howard and I’ve been through it all and I’d like to share the experience with you.”  Actor Ken Howard, in the middle of his stint as the White Shadow, decided to take three young boys, Li’l Billy Warner, Shane Hankins and Kade Lyons on an unsupervised camping trip to shoot the shit about wet dreams and unwanted pregnancies over wiener roasting and s’mores.  With a dynamite soundtrack that includes hits by Rod Stewart, Blondie, The Eagles and Willie Nelson. 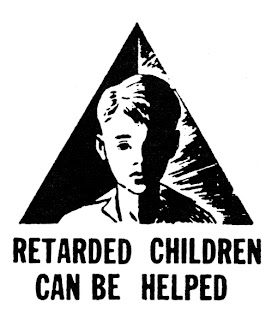 He’s Mentally Retarded (Color, 1975)
Sometimes men face challenges from the womb.  In picturesque suburbia, there’s a new boy on the block, Craig. Craig is a special boy, but his unsympathetic neighbor thinks “there’s something wrong with him.”  Will he learn the error of his ways and grow to accept, and possibly even love Craig?  Do you know anyone like Craig?

Boys Beware (Color, 1973)
Lieutenant Williams recounts a few tales of boys caught unawares by the likes of predatory homosexuals.  Ralph takes an interest in young boy Jimmy Barnes, drives him fishing and shows him nudie pictures, sounds like the perfect friendship. “What Jimmy didn’t know was that Ralph was sick, a sickness that was not visible like smallpox, but no less dangerous or contagious.  A sickness of the mind.  You see, Ralph was a homosexual.”  Will Jimmy get out alive?  Will you know what to do when you encounter a dangerous homosexual?


Benny and the ‘Roids (Color, 1988)
Benny has got it all; a great looking girlfriend, a best bud and the High School cred. of being on the football team.  But his teammates pick on his puniness and even as he self-indulgently videotapes himself working out, the progress just isn’t fast enough.  The next logical step, ask the beefiest, sketchiest looking guy at the gym where to score some steroids.  How long can Benny keep his perfect life with his dirty little secret, and will it end up being worth it?  As it is a Disney production, I’m sure you can guess it won’t be, but you’ll still enjoy your front row ticket to the RAGE!

Sex Hygiene (B&W, 1941)
“Most men know less about their own bodies than they do about automobiles” admonishes the doctor that’s about to take one army base of whore-mongering recruits and teach them the disgusting truth of what awaits them after trifling with “contaminated women.”  This classic VD film was produced in WWII by the War Department in collaboration with the Surgeon General and through epic, Star Wars-length written prologues, and graphic footage of chancres and blisters, it sought to keep our troops in fighting shape, with lessons we can still stand to learn today.


The Hangover (Color, 1978)
This is no hilarious Buddy comedy.  Bill has a problem, a problem a lot of us are facing right now, he had too much fun last night, and now he’s got to face the day.  Face the shakiness of his hands, face the “nag nag nag” of his wife, Bess, face the morning commute.  And that’s just before he has to go operate heavy machinery at work.  I hope it was worth it, Bill.

With enough Macho Trailers and Commercials to grow a few extra hairs on your chest!

Curator’s BiographyKat Shuchter is a graduate of UC Berkeley in Film Studies.  She is a filmmaker, artist and esoteric film hoarder.  She has helped program shows at the PFA, The Nuart and Cinefamily at the Silent Movie Theater and was crowned “Found Footage Queen” of Los Angeles, 2009.
Email ThisBlogThis!Share to TwitterShare to FacebookShare to Pinterest
Newer Post Older Post Home