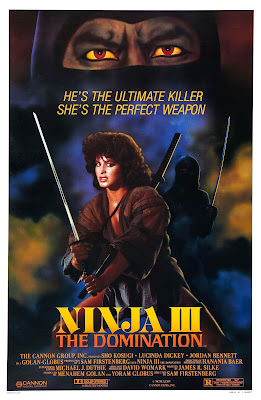 Every Sunday night since March 2005, Bad Movie Night has invited patrons of The Dark Room to heckle the best in bad movies, and occasionally as the worst in good movies.  (A few of the most mediocre of mediocre movies have crept in there, too.)  But on Sunday, February 10, Bad Movie Night walks around to the corner to team up with Oddball Films as they present the best of the worst of the best movies of the 1980s ninja cycle: Ninja III: The Domination (1984)!  It's the movie that finally answers all your questions from Enter the Ninja and Return of the Ninja, with the possible exception of “Why is the sequel to Enter the Ninja and Return of the Ninja called Ninja III: The Domination?”  But there is dominating and ninja-ing in the movie, so you gotta give it that.  And jazzercise.  So, so much jazzercise. Starring Lucinda Dickey (Breakin' & Breakin II: Electric Boogaloo) and featuring a 10 minute ninja-golf massacre, a creepy use of V8 juice and a serious hair-sweater, this film hits the 1-2 punch of being both mind-boggling AND brain-boiling! Your riffmasters will be Sherilyn Connelly, Jim Fourniadis, and Alexia Staniotes, and is Bad Movie Night custom, the audience is encouraged to join and yell the screen.  Don’t worry, the movie can handle it.  Before the feature, arrive early for a pre-show comprised of trailers of all your ninja favorites including Full Metal Ninja (1989), Ninja in the Killing Field (1984), The Ninja Squad(1986), Ninja Dragon (1986), Ninja Terminator (1985), and many, many more plus 16mm Oddball favorites make it in the ninjazzercize mix!