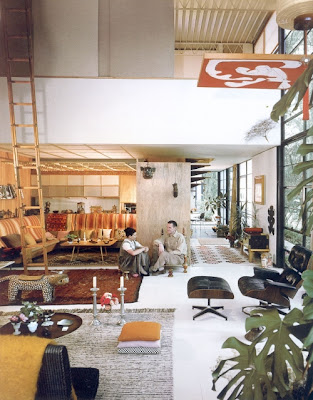 Oddball Films presents The Eames Legacy - Short Films by Charles and Ray Eames. Among the finest designers of the 20th Century, the husband and wife team are best known for their groundbreaking contributions to architecture, furniture design, industrial design and manufacturing, but the Eames’ were also brilliant and inventive filmmakers, able to illustrate the most abstract concepts with readily understood images. The legacy of this husband and wife team includes more than 100 films produced between 1950 and 1982 that reflect the rich scope of their interests. This program includes Powers of Ten (1968), their most famous film about orders of magnitude; Tops (1969), a brilliant childlike anthropological film capturing spinning tops from different cultures and eras;  IBM Mathematics Peep Show (1961) is a succinct and poignant presentation of 5 separate mathematical concepts; Toccata For Toy Trains (1957) a marvelous celebration of antique toys; A Communication Primer (1953); The Image of the City (1969), a lyrical treatise on the relationship between photography and the urban landscape ; and House: After Five Years of Living (1955), the beautiful contemplation on the home they built for themselves and lived in till the end of their lives.   Noted for their furniture designs -- the "Eames chair" in particular is considered one of the most significant and widely recognized furniture designs of the 20th century. The Charles Eames Lounge Chair set a standard for comfort and simplicity in modern design. The chair is so important in modern furniture design that it has become a part of the permanent collection of New York's Museum of Modern Art. There is so much to say about the legacy of the Eames’s that an entire period has been named after them. 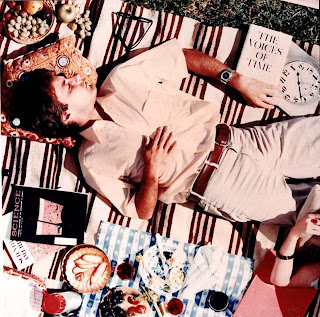 
Undoubtedly the most famous of the Eames Films, Powers of Ten is probably one of the most watched short films of the post-war era.  Powers of Ten presents the profound idea of orders of magnitude, with the subtitle of the film being: A Film Dealing With the Relative Size of Things in the Universe and the Effect of Adding Another Zero. 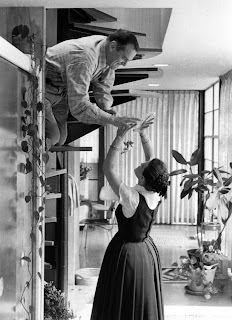 Starting at a picnic by the lakeside in Chicago, this famous film transports us to the outer edges of the universe. Every ten seconds we view the starting point from ten times farther out, until our own galaxy is visible only as a speck of light among many others. Returning to earth with breathtaking speed, we move inward--into the hand of the sleeping picnicker--with ten times more magnification every ten seconds. Our journey ends inside a proton of a carbon atom within a DNA molecule in a white blood cell. It is all done in a single, continuous, seamless shot. It’s also one of  the most ambitious tracking shots in the history of cinema. The film has been chosen by the Library of Congress for the National Film Registry.

House: After Five Years of Living (Color, 1955)A beautiful collage of photographs of the exterior and interior of the house and studio, designed and built by Charles Eames, Case Study House #8.  Built on a hill in California overlooking the ocean, this modern and unique structure reflect the interests of Charles and Ray Eames and shows the influence of Japanese simplicity in the architecture and furnishings. Some of their artwork and personal objects are also shown, illuminating their personal style. Shows shadows on a corner wall, part of a table laid for breakfast, a bowl of apples, a painting, flowers in brilliant colors.  Charles and Ray Eames designed the house for themselves in 1949; made entirely from standard, industrial parts, the Eames House is beautiful, functional and a true home. They lived there for the rest of their lives (Charles died in 1978, Ray in 1988) 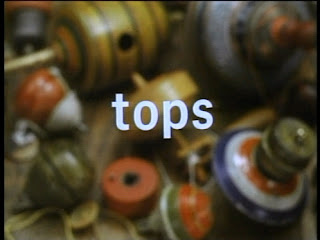 Tops (Color, 1969)
Toys occupy several of the Eames films, including Tops, a purely visual film that documents the short life span of a spinning top. It’s essentially a silent anthropological film and captures tops from different cultures and eras. The Eames Office contained a menagerie of toys, and it was Charles who once asked rhetorically, “Who would say that pleasure is not useful?” Tops was shot from the extreme perspectives of close-ups – an expressionistic technique that lets the audience experience toys as if from the eyes of a child. Whether set into motion by the twist of the fingers or the pull of a string, these colorful tops are even more beautiful seen through the eyes of Charles and Ray Eames. The stunning variety of the tops featured here is almost as dizzying as the whirling toys themselves. Composer Elmer Bernstein, a frequent Eames collaborator, spins the musical spell. 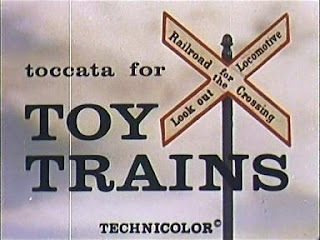 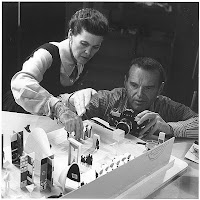 IBM Mathematica Peep Show (Color, 1961)
Also known as "IBM Mathematics Peep Shows," these five short films were commissioned by IBM and created by Charles and Ray Eames for inclusion in the 1961 Mathematica exhibition that took place at the California Museum of Science and Industry and the Museum of Science and Industry in Chicago. Like Powers of Ten, each of the five Mathematica Peep Shows was a succinct and poignant presentation of a single mathematical concept, communicated through the medium of film, mostly through animation with voice-over narration. 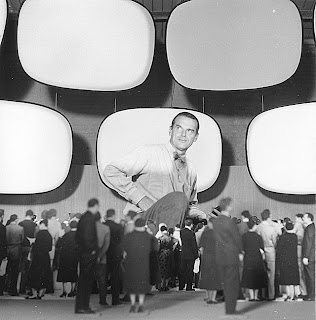 If there’s one theme all the Eames’ films share, it’s clarity. Nearly of the Eames’ films can be understood and appreciated by audiences of all ages, and all backgrounds. Charles & Ray were active at an pivotal juncture in the history of design. They were working in post-war America, where business was experiencing unprecedented growth, and the American public had acquired a taste for good design (for just one bit of evidence, see the film American Look (1958), sponsored by Chevrolet). They were working for IBM — one of the most affluent companies in the world, and a company helmed by Thomas J Watson, Jr, an exec who was famously concerned with the image of his company.

Charles & Ray Eames were artists adept at an astonishing number of disciplines. They produced museum exhibitions, architecture, logotypes, toys, slide-shows, furniture, books, photography, paintings films. However, their films are the least discussed of their work. They are one of the few American artists with an entire era named after them and their films contain some of the most original ideas of the century.

The Eames’ films are usually considered “instructional” or (corporate) “sponsored” films though they were much more than that-they were a cinematic methodology for them to express their all encompassing vision of the world in terms of moving images. In fact Charles Eames once stated “We’ve never used film as an artform but as projections of concepts..” Charles & Ray were frequently contracted by corporations like Polaroid, Westinghouse, and IBM working integrally with them to create some of the most elegant and visually compelling educational and corporate films ever made. In their film SX-70 (1972), intended as a promotional film for the newly released Polaroid SX-70 camera, the Eames’ take advantage of the opportunity to discuss optics, transistors and to display their own Polaroid photographs.