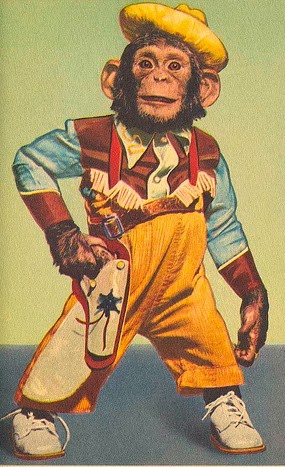 Oddball Films and curator Kat Shuchter present The Weird Weird West - Chimps, Cartoons and Rock 'n' Roll, a program of some of the strangest, most inventive, psychedelic, hilarious, animated, musical and interesting takes on the Old West.  From chimp cowboys to interpretive dancing ghosts, Marlene Dietrich to Lenny Bruce, this is one night that goes way beyond the genre of the Western while still revering its tropes.  Jon Byner's Something Else (1970) was a short-lived TV musical spectacular and this all-star episode set in a ghost town features performances by Roberta Flack and Phil Ochs, as well as the Action-Faction dancers.  Brilliant animators Chuck Menville and Len Janson animate themselves as cowboys riding sans horse in the hilarious Blaze Glory (1969). Shorty the Chimp has got his spurs on and he's ready to take down those bandits in Chimp the Cowboy (1937). In Le Western (1971), Jean-Charles Meunier animates French coins into a western melodrama. In an excerpt of Destry Rides Again (1939) Marlene Dietrich captivates a saloon full of men (including Jimmy Stewart) until she gets a barrel dumped over her head! Legendary comedian Lenny Bruce takes on the Lone Ranger and Tonto in the incendiary animated routine Thank You Mask Man (1968). Plus! Cowboy Soundies (1940s) with Tex Ritter and a Devo-esque whipping frenzy, excerpts from the psychedelic western Zachariah, Kodachrome travelogue/commercial Dudin' (1955) and more strange surprises. So, hop on your horse and mosey down to Oddball for the weirdest westerns you've ever seen! 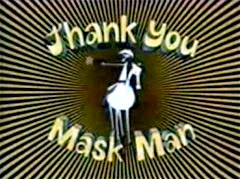 Thank You Mask Man (Color, 1968)
Before George Carlin, Richard Prior and Redd Fox there was Lenny Bruce. This legendary animated short by the infamous comedian and satirist Lenny Bruce is a vivid send up on race, class and homophobia.  Made by local animators years after Bruce’s death with recordings from his performances, this controversial cartoon was blacklisted from many theaters and film festivals.  Watch as Tonto and the Lone Ranger let it all hang out!

Something Else (Color, 1970)
A musical spectacular all set in a ghost town, featuring a variety of some incredible musical talent.  Actor/comedian John Byner hosted 25 episodes of this television music program in 1970, capturing some incredibly rare and unique performances by the known and obscure. It’s astonishing to think that you could turn on the telly and catch total freakouts by Frijid Pink and the amazing prog-psych “Cricket Song” by Mephistopheles (featuring some wild optical printing film effects), as well as Creedence and Roberta Flack- amidst an anarchic comedy and wild hippy dance numbers. With The Action Faction Dancers and featuring: Creedence Clearwater Revival, Three Dog Night, Mephistopheles, Frijid Pink, Phil Ochs, Norman Greenbaum, Roberta Flack and more. 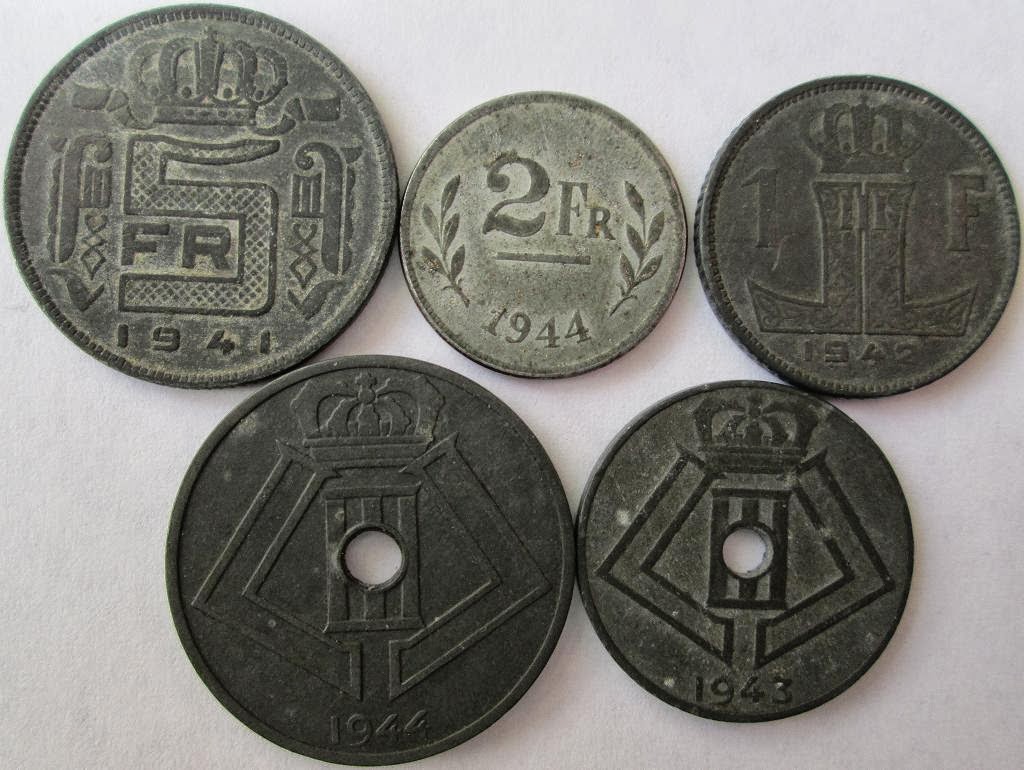 Le Western (Color, 1971)
This coin slot's not big enough for the both of us! The tropes of the western genre are so well worn that when re-enacted with geometric shapes grunting in a vaguely French manner, it makes very little difference.  The players here are jetons, the payphone tokens once widely used in Europe, leaving us to wonder how long director Jean-Charles Meunier had to wait for a phone.

In the 1960s two friends, Charles David “Chuck” Menville and Len Janson revived the then-dead art of stop motion pixilation animation. Pixilation, the animation of living beings, and object animation, was nothing new to film, but Menville and Janson took the process to a whole new level both technically and creatively. In this Western spoof, our heroes and villains ride around, without horses in sped up style. The film was a hit short at Midnight Movie screenings in the early 70s. 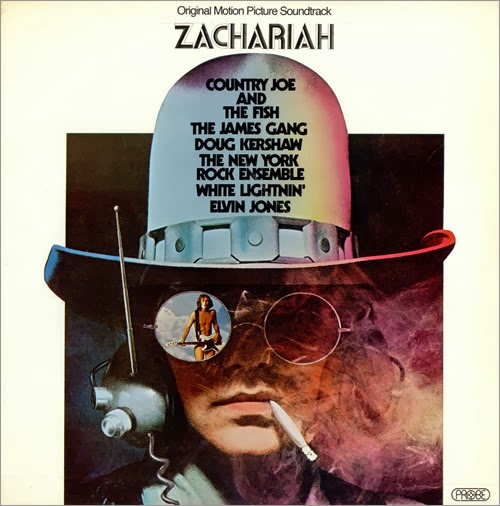 Zachariah (Color, 1971, excerpt)
The legendary jazz drummer Elvin Jones steals the show in this crazy psychedelic western (starring Don “Miami Vice” Johnson and Dick Van “8 is Enough” Patten!). In the role of outlaw Job Cain, in this clip he plays with The James Gang (featuring future Eagles guitarist Joe Walsh) on a song called “Laguna Salada”, then destroys the place with a wild drum solo. 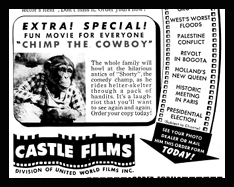 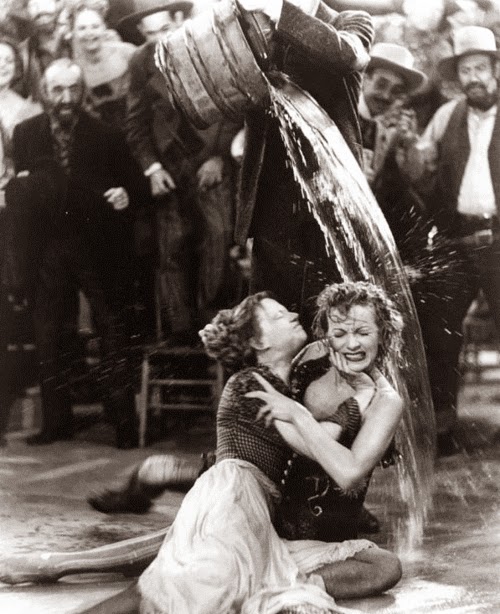 Excerpt from Destry Rides Again (1939, B&W)
In one of Marlene Dietrich’s few Western films, we see her sing, dance, fight, and finally, get a barrel of water poured over her head by none other than a young Jimmy Stewart.

Dudin’ (1955, Color)
In this commercial travel video from the mountains of Colorado, we see what life during a dude ranch vacation looks like. In addition to sheep herding, horse rides and rodeos, it turns out ping-pong is a major aspect of ranch life, too! The Texas Strip
Whip It Good!  This Western soundie features a pre-Devo undressing by whip!

There is No Sunshine with Spade Cooley and Tex Williams

Call of the Canyon with Alvo Ray and His Orchestra

Please Insert a Dime: All About Soundies!
Soundies can be considered the precursors to music videos. Produced during the years 1940 to 1946, Soundies were made to be seen on self-contained, coin-operated, 16mm rear projection machines called Panorams. They were located in nightclubs, bars, restaurants and other public places. Eight Soundies, featuring a variety of musical performances, were generally spliced together on a reel which ran in a continuous loop. The Panoram, a complicated and unique machine, later served as the basis for the RCA 16mm projector. 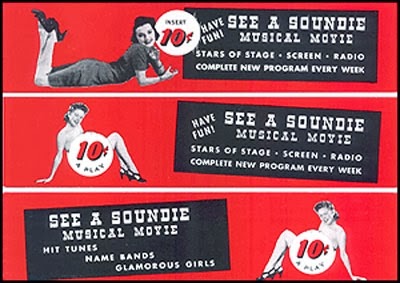 Curator’s Biography
Kat Shuchter is a graduate of UC Berkeley in Film Studies. She is a filmmaker, artist and esoteric film hoarder.  She has helped program shows at the PFA, The Nuart and Cinefamily at the Silent Movie Theater and was crowned “Found Footage Queen” of Los Angeles, 2009.
About Oddball Films
Oddball films is the film component of Oddball Film+Video, a stock footage company providing offbeat and unusual film footage for feature films like Milk, documentaries like The Summer of Love, television programs like Mythbusters, clips for Boing Boing and web projects around the world.
Our films are almost exclusively drawn from our collection of over 50,000 16mm prints of animation, commercials, educational films, feature films, movie trailers, medical, industrial military, news out-takes and every genre in between. We’re actively working to present rarely screened genres of cinema as well as avant-garde and ethno-cultural documentaries, which expand the boundaries of cinema. Oddball Films is the largest film archive in Northern California and one of the most unusual private collections in the US. We invite you to join us in our weekly offerings of offbeat cinema.
Email ThisBlogThis!Share to TwitterShare to FacebookShare to Pinterest
Newer Post Older Post Home