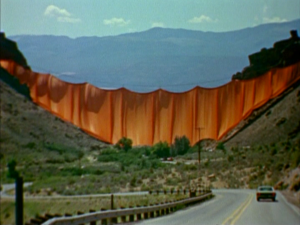 Oddball Films presents Monumental Artscapes, a program of 16mm short documentaries celebrating those artists that dared to redefine artwork in the modern world by thinking and working on a grander scale.  This imaginative evening includes the planning, construction and philosophy behind iconic earthworks, monumental sculpture and murals by Christo, Robert Smithson, David Alfaro Siqueiros, Claes Oldenburg and G. Augustine Lynas.  In a mini-tribute to the recently departed Albert Maysles, we will be screening the Maysles brothers first collaboration with Hungarian-born pop-artist Christo as he constructs his first large-scale public work in Colorado in the compelling (and Oscar-nominated) Christo's Valley Curtain (1974).  Robert Smithson documents his own massive construction of a 1,500 foot coil in the Great Salt Lake in Spiral Jetty (1970). Watch as one of Mexico's most legendary muralists plans and paints the largest mural in the world (in stunning color) in the kaleidoscopic Siqueiros, El Maestro: The March of Humanity in North America (1969).  Claes Oldenburg speaks on the importance of his outrageous soft sculptures in an excerpt from Art of the Sixties (1967). And behold as ephemeral sculptor G. Augustine Lynas turns a frisbee, shells and sand into a Mayan temple on a Fire Island beach in Sandsong (1987). It's a one of a kind look behind the creativity and construction of some of the most impressively huge artwork ever to grace the valleys, lakes and beaches of the earth. 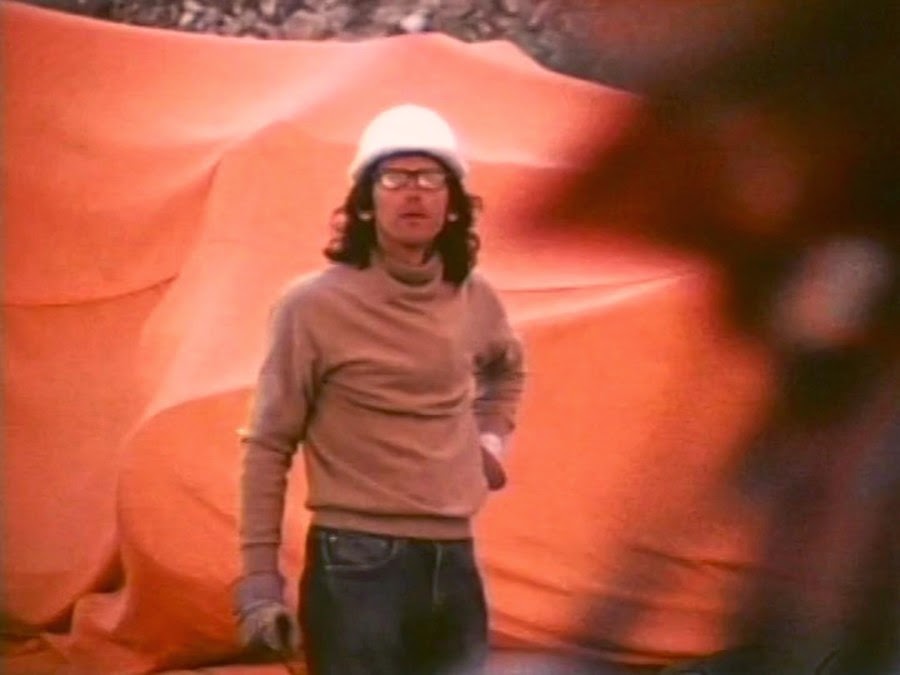 Christo's Valley Curtain (Color, 1974, Albert and David Maysles, Ellen Gifford)
An Oscar-nominated documentary from the direct cinema forefathers Albert and David Maysles, with cinematography from Albert, who unfortunately passed on this month.  This film was to mark not only the construction of audacious artist Christo's first large-scale public work in Rifle Gap Colorado, but also the beginning of a collaboration between the artist and filmmakers that would last for decades.  This is the shortest of the films and yet it manages to pack in all the creativity, process and art philosophy of the longer films into a breathtaking and compelling 28 minutes. 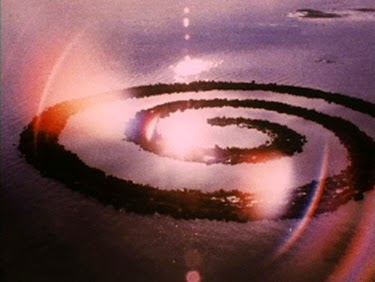 Spiral Jetty (Color, 1970, Robert Smithson)
Directed by Smithson himself, this remarkable film documents the construction of the massive earthwork in the Great Salt Lake.  Smithson used all natural materials to construct a giant spiral extension to the land that juts into the lake.  This 15 foot wide and 1,500 foot long artificial peninsula still remains today, although the black rocks have turned white from salt encrustation.  As the lake rises and lowers, the jetty is obscured and revealed.  Follow Smithson from plans to construction in this landmark film. 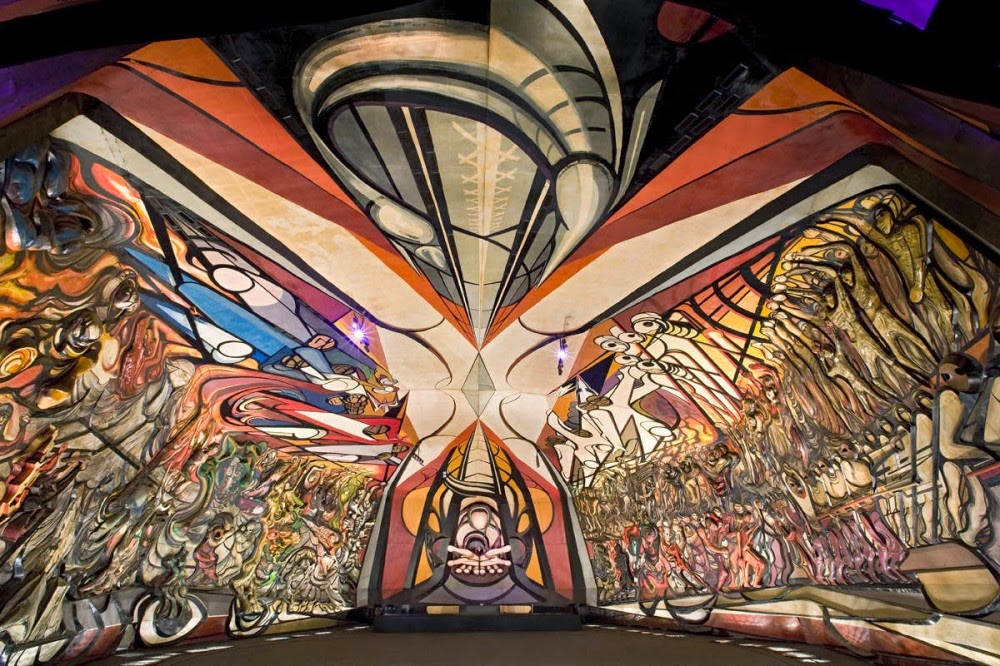 Siqueiros, El Maestro: The March of Humanity in North America (Color, 1969, Bert Van Bork)
A vibrant portrait of the master muralist David Alfaro Siqueiros as he works on the largest mural ever painted, "La Marcha de Humanidad" in Mexico.  Along with Rivera and Orozco, Siqueiros was one of the founding fathers of the Mexican mural movement.  A communist, his work is often socially and politically motivated. This pristine print shows every remarkable color of this enormous achievement as we watch it being painted and glean wisdom on creativity and art as a political medium from a master. 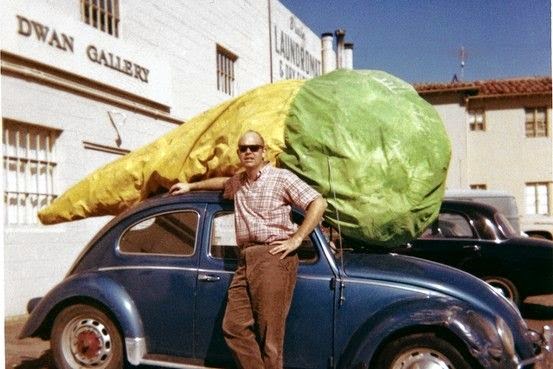 Claes Oldenburg in The Art of the Sixties (Color, 1967, excerpt)
This rarely seen documentary aired on CBS at the height of the revolutionary and hopeful changes sweeping the art world (not to mention the rest of society). The film takes an inside look at some of the leading figures in art during the decade, including rare glimpses into their studios and workshops. Highlights include soft-sculpture pop iconographer Claes Oldenburg who states “My work is not meant to be funny or even art, my work is just made to be important”.  Oldenburg's enormous soft-sculptures magnify often mundane things like egg-beaters and sandwiches into massive and monumental pieces of art. 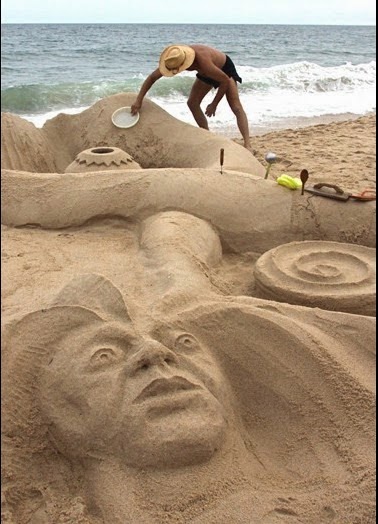 A fun look at the sculpture of G. Augustine Lynas, an artist that works in ephemeral elements like snow and sand.  Here, we get to see this free-spirit at work on the beach of Long Island, New York.  Working with a frisbee and sea-shells, be amazed as Lynas transforms the beach into a Mayan temple as he extolls his thoughts on creativity and working with natural materials to create such impressive art that is destined to be swept back into the sea.
About Oddball Films
Oddball films is the film component of Oddball Film+Video, a stock footage company providing offbeat and unusual film footage for feature films like Milk, documentaries like The Summer of Love, television programs like Mythbusters, clips for Boing Boing and web projects around the world.