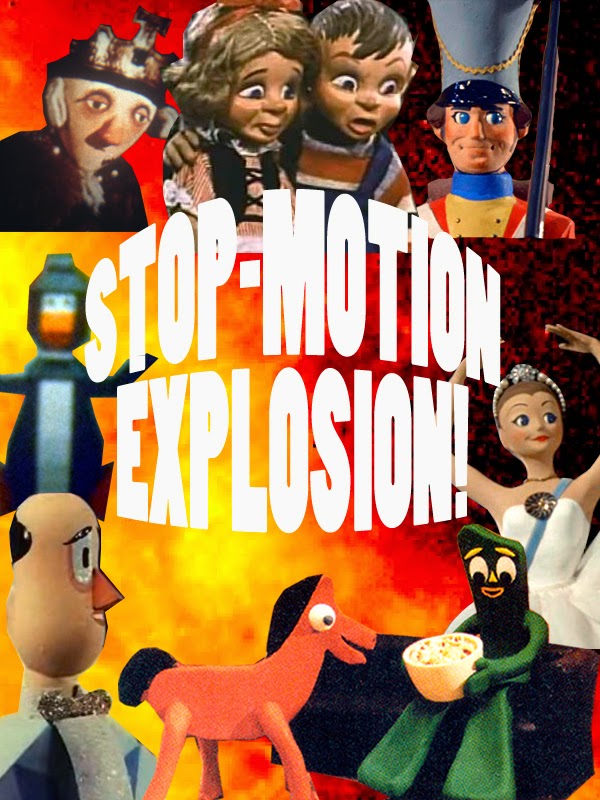 Oddball Films and curator Kat Shuchter bring you Stop-Motion Explosion!, a program of mind-blowing stop-motion animation from the 1930s to the 1980’s. In a world saturated with CGI, Oddball Films opens the vaults to celebrate when historical, fantastical and anthropomorphic creatures were hand-sculpted and manipulated into “life.”  This program features stop-motion heavy-hitters Ray Harryhausen, George Pal, Art Clokey, Norman McLaren, Ivo Caprino and Will Vinton with new finds and a few all-time favorites. Everybody's favorite green clay-boy gets into trouble while baking in In the Dough (1957) and into a musical frenzy in Gumby's Concerto (1957).  Go for the gold with two Lego sports shorts from Hungary, Gymnastics (1986) and Figure Skating (1986) both quirky and hilarious re-imaginings of Olympic sports that include robot and penguin intrusion. Brilliant Canadian innovator Norman McLaren animates people though the magic of pixilation stop-motion in Two Bagatelles (1953). Another Canadian, Co Hoedeman animates Russian dolls dancing in Matrioska (1970).  Fall in love when your toys come to life in Ivo Caprino's enchanting Steadfast Tin Soldier (1955) in gorgeous Technicolor. Practical-special effects legend Ray Harryhausen gives us a sweet puppet version of Hansel and Gretel (1951). Will "California Raisins" Vinton turns Washington Irving's Rip Van Winkle (1978) into a psychedelic claymation freak out! And see if you can identify if The Shivering King is in fact a Jiri Trnka Czech puppet film or not! With more surprises in store! And it wouldn't be a stop-motion explosion without the hand-carved art deco bandstand of George Pal's Puppetoon: Cavalcade of Music (1934). Come early to catch The Mouse and the Motorcycle (1986), an ABC weekend special with the mousy voice talents of Zelda Rubinstein and Billy Barty. It's a night one million minute movements in the making! 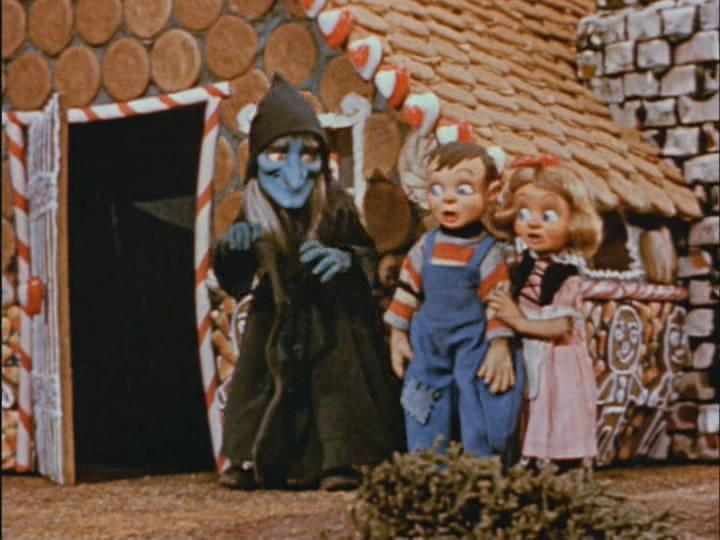 The Story of Hansel & Gretel (Color, 1951, Ray Harryhausen)
Will the most notorious gingerbread binge in fairyland end in heartache or a just a sick tummy? Ray Harryhausen’s claymation is as expressive in this tale of hungry woodland tots as it always was for monsters. 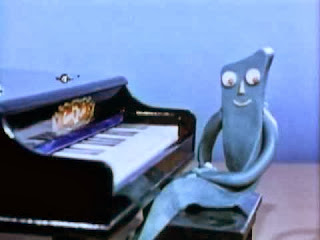 
Everybody’s favorite little green shape shifter, Gumby and his B.F.F. Pokey go on a number of fantastical and charming adventures in these rare original shorts by Claymation Master, Art Clokey.  In The Dough, Gumby bakes up some blood-thirsty pastries.


A surreal stop-motion masterpiece!  Art Clokey's little green buddy must deal with doppelgangers, multiplying pianos and other bizarre shenanigans to entertain a pair of anthropomorphic musical notes that look like they were made out of hard-boiled eggs.

Cavalcade of Music (B+W, 1934, George Pal)
The creative force behind some of the most inventive monsters in Fantasy film, Hungarian exile George Pal began his career pioneering a method of stop-motion used in his series of Puppetoons, earning him seven consecutive Oscar nominations. In one of his earliest Puppetoons, Cavalcade of Music, Pal creates an epic spectacle of music and dance all with carved wooden puppets. From the chic Art Deco bandstand, to an entire puppet jazz orchestra, to a puppet can-can, this film overwhelms with its imagination and scope. 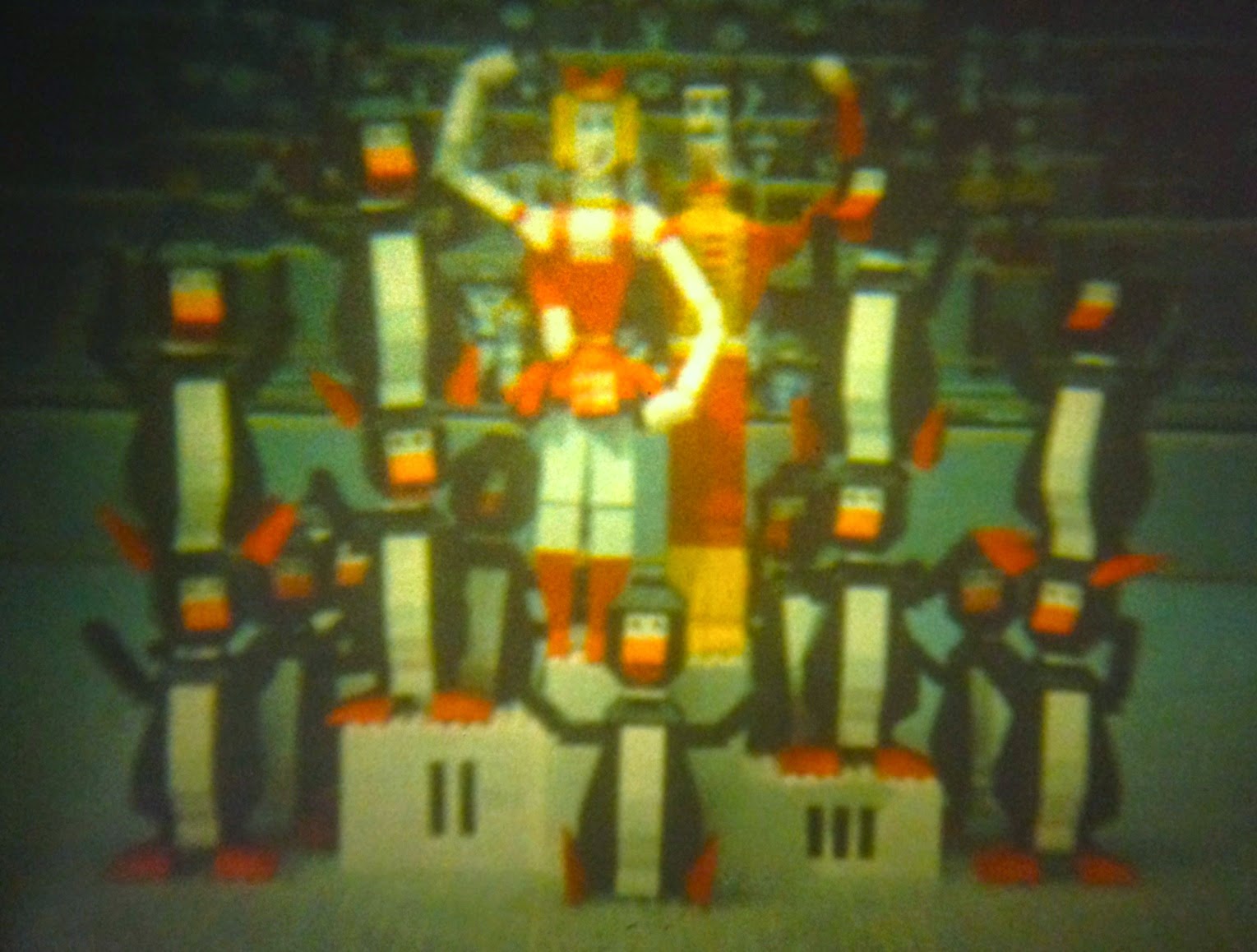 Two Lego Sports Shorts!
Figure Skating (Color, 1986, Lajos Szabo)
A hilarious new find from Hungary and part of a series of olympic sports acted out by Legos.  The couple on the ice are at the top of their game as they disintegrate into separate blocks, rebuild in different costumes, let out a swarm of penguins and skate out legos hearts, but is it enough showmanship to win the gold? 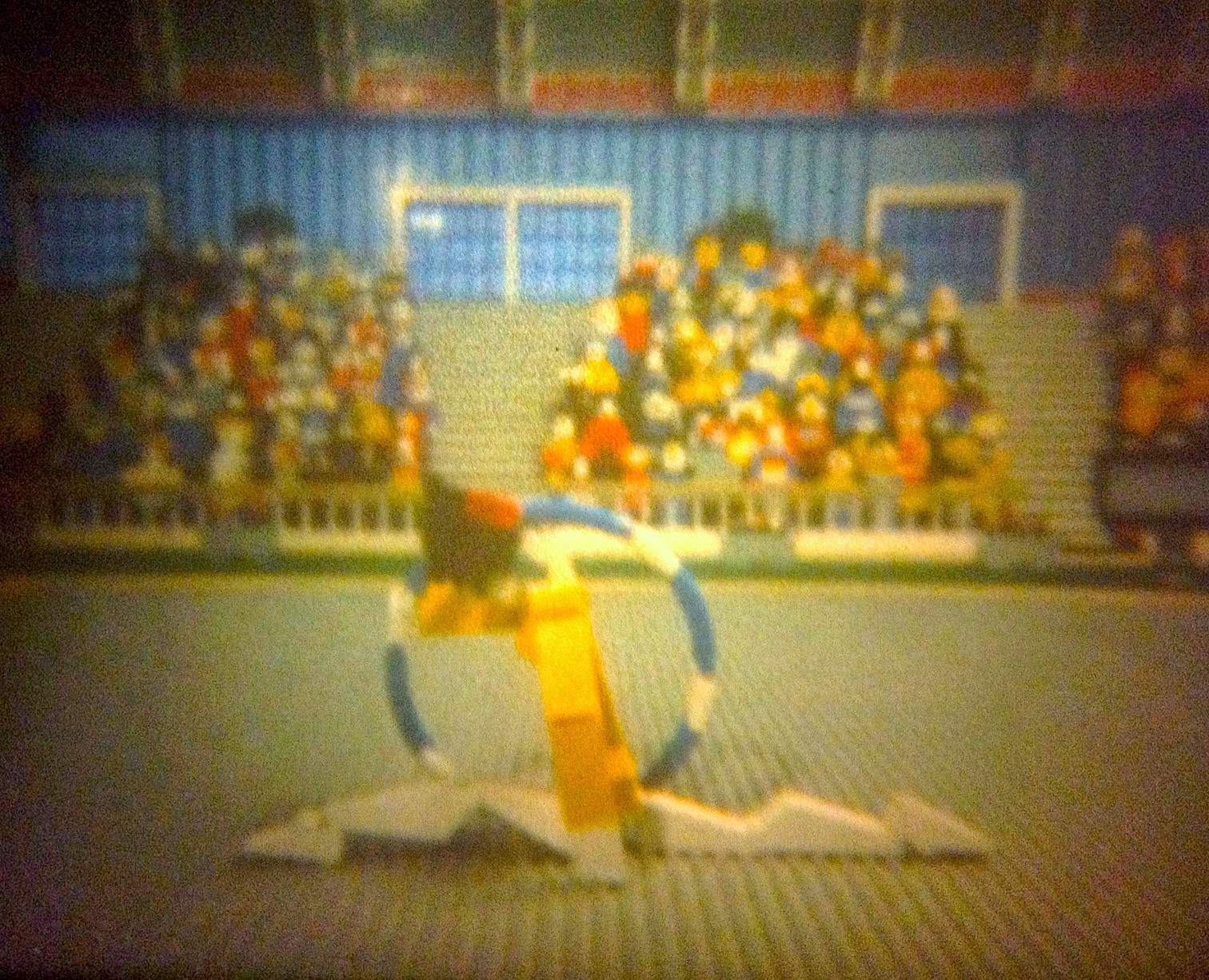 Another Lego sports short!  It's time for the floor routine and while two of the gals have all the right moves, it's the robot on the floor that really wins the judges acclaim!  Both shorts are in beautiful color and win the gold in comedy!


A gorgeous print of an even more enchanting story from Hans Christian Anderson.  A beautiful and delightful mix of live action and stop-motion animation that brings to life the tale of a little tin soldier who is in love with a ballerina doll.  Even as the soldier is mistreated, lost, broken and ultimately burned, his love continues and is met with the ultimate sacrifice. A Norwegian production made for the 150th anniversary of the original story in Denmark.

Matrioska (Color, 1970 Co Hoedeman)
A whirling, twirling party with a set of Russian nesting dolls brought to you by the National Film Board of Canada. 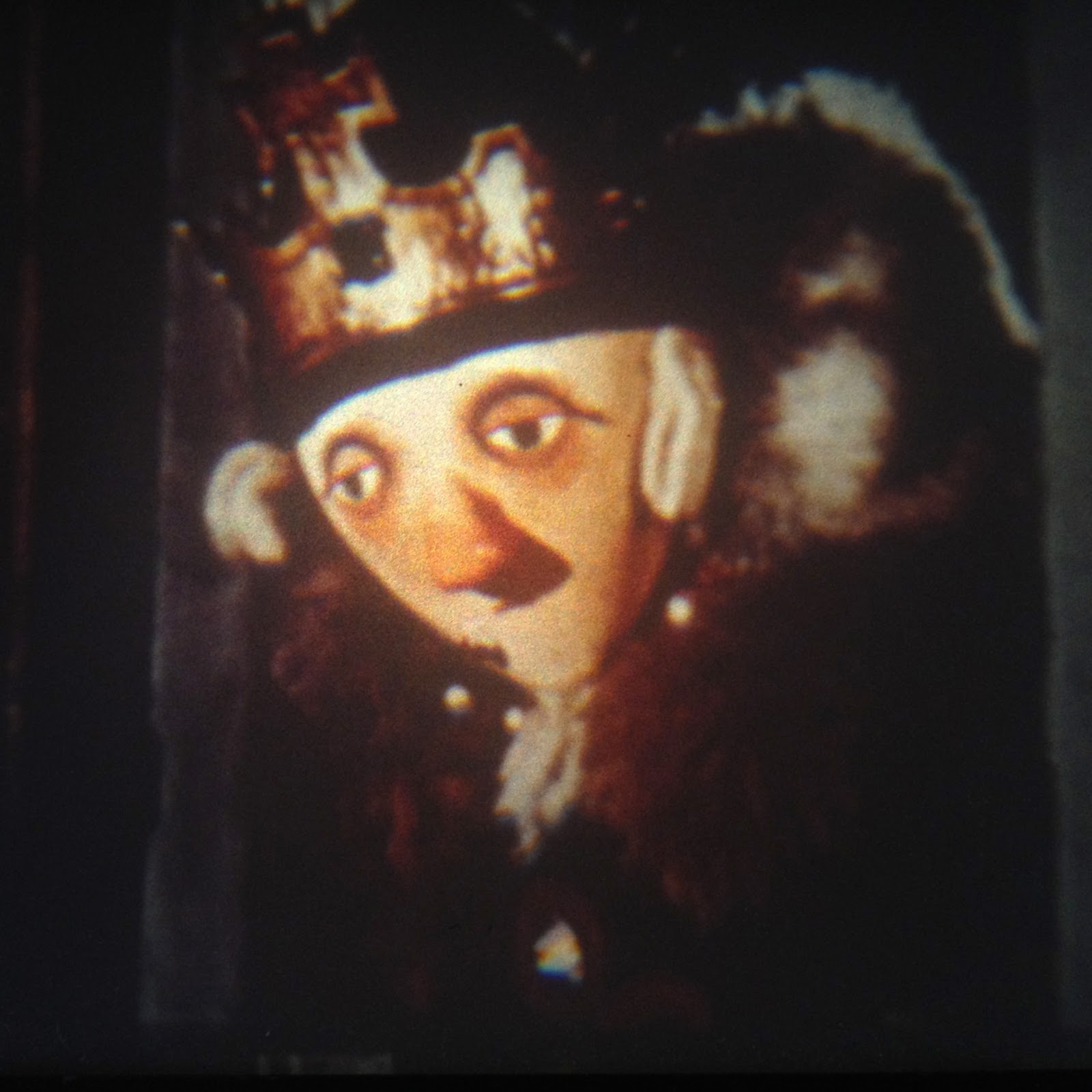 The Shivering King (Color)
This uncredited puppet fairy tale is unknown in origin, although the style and content would suggest that perhaps this is one of Jiri Trnka's Czech fairy tales, renamed and repackaged (and redubbed) for American audiences.  This heartwarming tale of a monarch who finds himself freezing until the children of his kingdom melt his icy heart clearly has Communist undercurrents, another indicator that it is in fact Czech in origin. 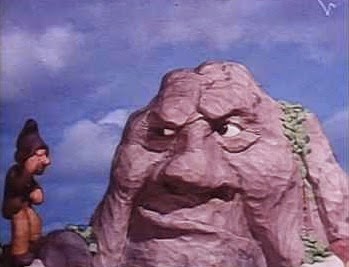 Rip Van Winkle (Color, 1978, Will Vinton, excerpt)
A psychedelic freakout in nature brought to you by Claymation pioneer Will "California Raisins" Vinton.  Washington Irving's classic tale gets a Claymation twist with plenty of far-out and psychedelic imagery during our titular misanthrope's twenty-year dream cycle!

Two Bagatelles (Color, 1953, Norman McLaren)
Two experiments in pixilation (animating humans and objects through stop-motion photography) co-directed by animation genius and founder of the National Film Board of Canada Norman McLaren and filmmaker and actor Grant Munro (who coined the word “pixilation”). In the first, (which was inspired by their award-winning film NEIGHBOURS/VOISINS) a man waltzes to a synthesized version of a Johann Strauss melody; in the second, he moves around playfully to a tune played on a street organ. 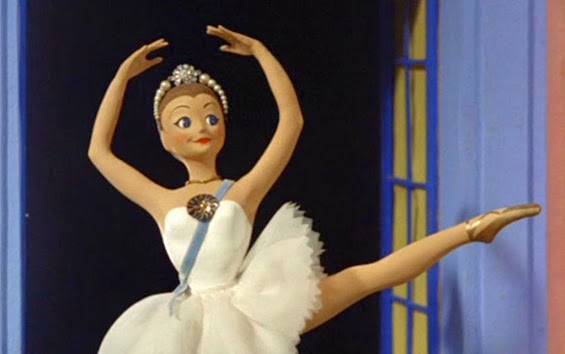 Curator’s Biography
Kat Shuchter is a graduate of UC Berkeley in Film Studies. She is a filmmaker, artist and esoteric film hoarder.  She has helped program shows at the PFA, The Nuart and Cinefamily at the Silent Movie Theater and was crowned “Found Footage Queen” of Los Angeles, 2009. She has programmed over 150 shows at Oddball on everything from puberty primers to experimental animation.
About Oddball Films
Oddball films is the film component of Oddball Film+Video, a stock footage company providing offbeat and unusual film footage for feature films like Milk, documentaries like The Summer of Love, television programs like Mythbusters, clips for Boing Boing and web projects around the world.