Oddball Films welcomes authors, historians and collectors Warren Dotz and Masud Husain and to our Cinema Soiree Series, a monthly event featuring visiting authors, filmmakers and curators presenting and sharing cinema insights and films. Dotz and Husain will be in person discussing their two recent collaborations: Meet Mr. Product and Mr Product: The Graphic Art of Advertising’s Magnificent Mascots 1960-1985, a set of books that illustrate the story of the advertising mascot in America. This vibrant, colorful tribute to pop culture, treats readers to icons such as Cap’n Crunch, Goofy Grape, and Chokey the Smog Dog, as well as hundreds of rare and little-known characters that will surprise even the most avid fans and collectors of advertising ephemera. Husain will be discussing his collection and the genesis of the how the books came to be. Dotz will be available for informal questions after the screenings. Warren Dotz recently had a six month long exhibition at SFO, A World of Characters: Advertising icons from the Warren Dotz Collection; one of the most popular exhibitions at the airport ever. We'll be screening filmmaker Jan Stürmann's short documentary highlighting the expansive and colorful exhibit.  Jan will be present to introduce the video along with his perspectives. Oddball will be also screening dozens of Vintage Commercials from the archive, illustrating some of the characters that entice us to purchase cereal, gasoline, oats and more! Commercial cameos include (but not limited to) The Chiquita Banana, Twinkie the Kid, Count Chocula, The Campbell's Soup Kids and the Esso Tiger.  Plus, more advertising and branding films and clips from the archive: The 30-Second Dream (1977), Soopergoop (1976) and an excerpt from The Colonel Comes to Japan (1984).

Warren Dotz is a collector of pop culture ephemera and the author of thirteen books on advertising, design, and commercial label art.  His commentary has appeared in Advertising Age, Adweek and the New York Times Magazine.
Web: warrendotz.com


Masud Husain is a graphic designer, branding specialist, and avid collector of American advertising ephemera.  He designed and coauthored the award-winning books Meet Mr. Product and Ad Boy as well as Dog Food for Thought and Cat Food for Thought, with Warren Dotz.
Web: masudhusain.com 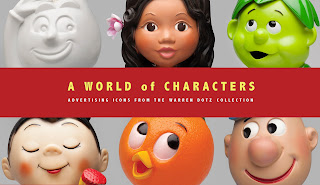 Jan Stürmann is a South African-born photographer and multimedia producer based in Berkeley, CA. He studied photography at Pretoria Technicon. Publishing credits include The New York Times, The Washington Post, The Boston Globe, Time, Newsweek and Marie Claire. Most of his work is focused on harnessing the story-telling potential of multimedia for editorial, corporate and NGO clients. Web: www.albinocrow.com 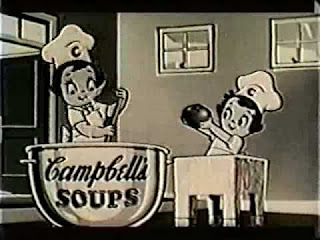 
The 30 Second Dream (Color, 1977)
Award winning mini documentary on the seductive power of TV ads. Juxtaposes carefully selected commercials to reveal how they exploit our fears, hopes and fantasies. Director Michael Lawrence says"through "story" and song, television advertising creates an environment that subliminally shapes our view of ourselves and our world. In an average lifetime, we spend the equivalent of six years of full-time employment watching TV commercials." 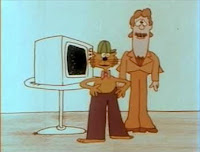 Soopergoop (Color, 1976)
Kids convince their mom to buy them the new cereal.  The cat, pictured on the box, comes to life as an animated figure and we watch the commercial that had convinced the kids to buy the cereal.  The cat takes us to an exaggerated factory where the cereal is made, using a machine to add sugar and air until the money-obsessed boss is happy with the cereal.  Then we see the cat and another money-obsessed man working through the making of the TV commercial.  We are back to live action where the kids want their mom to buy them the newest cereal.  The cat comes and reminds us that he can “make you want things you don’t need and never even heard of before.” 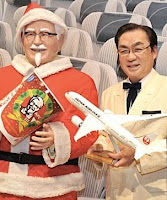 The Colonel Comes To Japan (Color, 1984, 5 min excerpt)
This Emmy-winning documentary was made 14 years after the opening of the first Kentucky Fried Chicken franchise in Japan. Hosted by Eric Sevareid, it is often hilarious/ridiculous as Western fast food meets Eastern politeness and service seriousness.  Many scenes invoke the farce of  Itami’s Tampopo. Sensitively written, produced and directed by John Nathan (translator of Mishima and Oe and writer of many books on Japanese culture), with a nonetheless obvious eye for humor.
About Oddball Films: