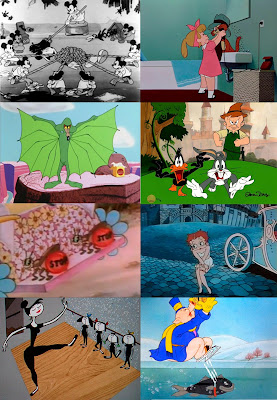 Oddball Films and curator Kat Shuchter bring you Classic Cartoon Cavalcade, an evening of some of our very favorite classic cartoons hand-picked from the San Francisco Media Archive's massive collection. From the 1930s-1950s, from the silly to the sexy with a little Looney Tunes, Merrie Melodies (including works by Robert Clampett, Friz Freleng and Chuck Jones), UPA, Fleischer Brothers, Walt Di$ney and imitators, just to name a few with tons of new discoveries and Oddball Premieres.  We've got a triple dose of that darn fool duck Daffy as he dreams of being "Duck Twacy, Famous Detective" and faces off against a hilarious den of supervillains in The Great Piggy Bank Robbery (1946).  He's scatting and zoot-suiting away with a living library (and a cameo by the sickly Frank Sinatra) in Book Revue (1946), and he teams up with Bugs to fend off a giant Elmer Fudd in Chuck Jones' Beanstalk Bunny (1955).  UPA brings us three delightful shorts in their groundbreaking limited animation style: A dance class gone awry in Ballet Oop! (1954), toddler on father violence in Family Circus (1951) and everybody's favorite nearsighted curmudgeon Mr. Magoo goes looking for a dog but ends up collaring a thief in Magoo's Canine Mutiny (1956).  Mi©key Mouse dreams of a life married to Minnie, and the dozens of baby mice that make his life hell in early Di$ney short Mi©key's Nightmare (1932). Betty Boop sings her way into the heart of her Prince Charming (with the help of a risque makeover from her fairy godmother) in Poor Cinderella (1934).  Heckle and Jeckle must fight off some canine robbers at their diner "The Indigestion Inn" in Blue Plate Symphony (1954).  W.C. Squeals is on skates to get some booze in Cracked Ice (1937).  Wile E. Coyote dresses like Batman, jets off on a rocket pack and paints a fake road, but never does catch his dinner in Gee Whiz-z-z-z (1955).  It's the day for the flower parade and one lowly cactus wants to win the day in Flowers for Madame (1935). Come early for more cartoon madness including the Goofy Gophers in Ham in a Role (1949), Foghorn Leghorn in Feather Dusted (1954) and a caricatured Hollywood shindig at Jack Benny's house Malibu Beach Party (1940). 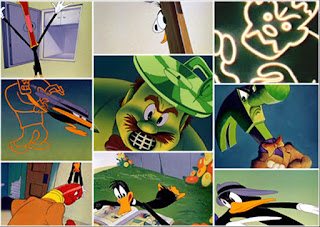 While reading his favorite comic book, Daffy Duck knocks himself unconscious and dreams that he’s “Duck Twacy, Famous Detective.”  All the piggy banks in town have been plundered and Duck Twacy is on the case as he follows footprints, climbs walls and ceilings, peels off a footprint to look under it and has a tussle with Sherlock Holmes. Porky the Pig has a cameo (driving the trolley car that leads directly to the secret hideout), and Daffy has to deal with numerous and ridiculous evil villains from Neon Noodle to Hammerhead.

Ballet Oop! (Technicolor, 1954, Robert Cannon)
A charming mid-century UPA short produced by Stephen Bosustow and directed by Robert Cannon. Miss Placement, the tutor of the Hot Foot School of Ballet is told that she has only three weeks before the four new pupils have to perform at the local festival. After an exhausting training regimen, can the girls pull of the performance of their lives and bring fame and acclaim to Hot Foot and Miss Placement or will it end in disaster? 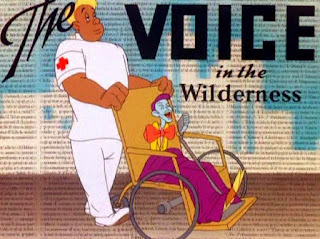 Book Revue (Color, 1946, Robert Clampett)
A library of books comes to life as told through site gags and literary puns as the book titles and the characters on the covers interact and have a jam session that includes another absurd caricature of sickly Frank Sinatra.  Daffy is feeling left out, so he dons a zoot suit and joins the party.  The wolf is after Little Red Riding Hood and Daffy tries to warn her in scat. The wolf is nabbed by The Long Arm of the Law and eventually burns in Dante’s Inferno.

Mi©key's Nightmare (B+W, 1932, Burt Gillett)
The world's favorite mouse in one of his early cartoons!  Mi©key says his prayers and heads off to dreamland.  He imagines marrying Minnie and that's when the nightmare begins!  They pop out 20 or so little mousy tots who make Mi©key's life a living hell!  Maybe that's why after 80+ years together this power couple never had any offspring!

Betty Boop in Poor Cinderella (B+W, 1934, Dave Fleischer)
A (sadly) black and white print of Betty Boop's only cartoon in color, never screened at Oddball!  A delightfully imaginative musical version of the classic fairy tale includes a risque transformation of Cinderella, stripping her down to her skivvies before dressing her up for the ball.

Blue Plate Symphony (Color, 1954, Connie Rasinski)
The magpies, Heckle and Jeckle are running their diner: Indigestion Inn with a song and a bunch of unappetizing and interactive dishes.  A couple of dog thieves are fixing to rob the joint, but the birds prove too smart (or insane) to go down without a fight and they use a whole pantry full of artillery to roust the mongrels from the joint before breaking into song again!

Magoo's Canine Mutiny (Color, 1956, Pete Burness)
Mr. Magoo wants a dog, so he heads over to the pet store to pick one out. While there, a thief in a fur coat attempts to rob the store, but Magoo - mistaking him for a furry pooch - collars him and heads for home.  When the cops apprehend Magoo's new pet, he's got to go looking for a real dog, but ends up in a record store, attempting to adopt a statue of the RCA dog.

Cracked Ice (B+W, 1937, Frank Tashlin)
W.C. Squeals,  a pig that looks and talks like W.C. Fields, tries to break into the Red Cross dog’s alcohol supply at a frozen pond.   A drunken fish with a magnet on its belly causes the pig to win an ice skating contest through magnetic force (because he is wearing metal skates). 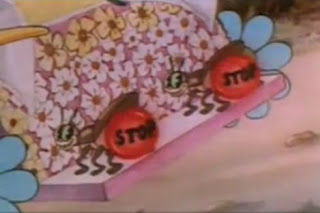 It's the day for the flower pageant and all the anthropomorphic flowers and bugs are ready to party. The pageant begins with a parade being led by a grass hopper followed by turtles begins ridden by more garden bugs, and a line of beetles playing trumpet flowers like horns. There are floats pulled by worms and snails. Flowers dance on the floats, and the crowd of flower spectators applauds and cheers.  A cactus decides to join in by planting super growing flower seeds which sprout and bloom in a matter of seconds, trellising over his windup truck to create a instant flower float. The judges are not impressed, Adding to the cactus’ chagrin, this truck explodes in a fury of gears and springs, and everyone laughs. In an unrelated story arch, someone has left a box of matches and magnifying glass unattended in the sun. The focused light ignites a match starting a fire which spreads to the pageant. Can the cactus redeem himself and save the day? 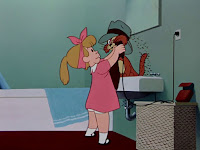 Family Circus (1951 B+W, Art Babbit)
Gloriously violent sibling rivalry from UPA and Jolly Frolics. Five-year-old Patsy has competition for her father's attention from the family's new baby daughter. She proceeds to wreak havoc all over the house and terrorizing the cat.  Daddy slips on a roller-skate, knocking himself unconscious. In a dream sequence - filmed using limited animation in the style of children's drawings - he realizes he has been ignoring his oldest child. He awakens and takes her in his arms, but Baby, now the jealous one, kicks up a fuss.

Beanstalk Bunny (Technicolor, 1955, Chuck Jones)
Jack and the Beanstalk gets a Looney-makeover in this beloved Chuck Jones masterpiece. Daffy is back as Jack and after he tosses his magic beans into Bugs' rabbit hole, the two shoot up to Elmer the Giant's castle in the sky.  The pair hide in snuff box, run on Elmer’s face, hide inside his head, jump out of his cigarette and more in an attempt to throw off the hungry giant, but will they succeed? 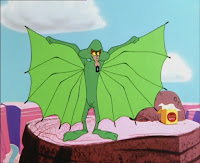 Gee Whiz-z-z-z (Color,  1955, Chuck Jones)
Coyote and Roadrunner are at it again and Acme has all the supplies to finally win that dog a meal! Wile E. paints a fake road, goes fishing with dynamite, rides on a jet pack and (most excitingly) dons a green Batman costume, all in the name of lunch. 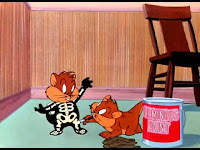 Ham In a Role (Color, 1949, Robert McKimson)
The Goofy Gophers are back and they've got their sights set on a Shakespearean-loving dog dramatist who thinks he's too good to be in cartoons.

Merrie Melodies: Feather Dusted (Color, 1954, Robert McKimson)
The widow hen (Prissie) and her bookworm son get the best of the over-outgoing Leghorn when he tries to teach the boy games. Foghorn tries to make the “panty waist" into a man by having him play sports games like croquet , cops and robbers,  Indians,  pirates, diving. The chick character with the glasses and pencil out smarts the know it all rooster until the granny scolds them both. The character of Foghorn Leghorn is based on Fred Allen's "Senator Claghorn," an inhabitant of his "Allen's Alley" played by Allen's announcer. 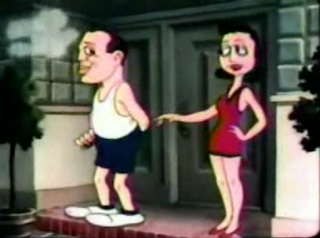