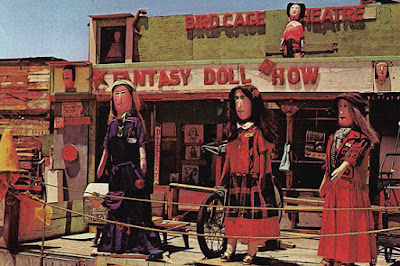 Oddball Films presents The Untrained Eye: Primitive, Folk and Outsider Artists. This unique program of 16mm documentaries from the 1950s-1980s features untrained artists who simply create out of a love for creating, and who, without formal schooling, possess an innocence and unique perspective not found in trained artists.  Visit the Mojave Desert and the "Bird Cage Theater" of life-sized dolls made by Calvin Black in Possum Trot (1977).  At 80 years old, Harry Lieberman found his true calling - painting - and at 102, with several one man gallery shows behind him, he credits art with saving his life in 102 Mature: The Art of Harry Lieberman (1980).  And head down to the farm with America's most famous folk artist, Grandma Moses (1950) to see a Technicolor "portrait of the artist as an old lady". Plus, a fascinating excerpt of grandma-turned-Warhol Superstar Woo Hoo May Wilson (1970), and A Boy Creates (1971), a non-narrative film that follows a young boy through the abandoned ruins of San Francisco’s Playland at the Beach and tracks him tending to his army of found art swamp statues in the long-gone Emeryville Mud Flats. 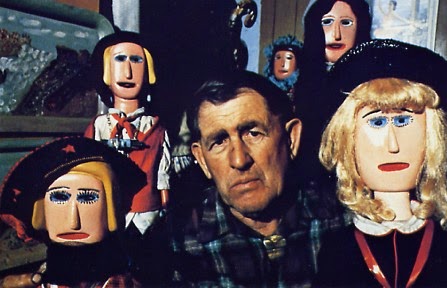 Calvin Black was a folk artist who lived in California's Mojave Desert and created more than 80 life-size female dolls, each with its own personality, function, and costume. He also built the "Bird Cage Theater," where the dolls perform and sing in voices recorded by the artist. The film works on two levels. One is the documentation of the artist's legacy and commentary on women: grotesque female figures moving in the desert wind and the theater with its frozen "actresses," protected by his widow from a world she views as hostile. The other is the re-creation of the artist's vision through the magic of film, as the camera enables the dolls to move and sing and brings theater to life as the artist imagined it. Produced and directed by award-winning SF filmmakers Allie Light and Irving Saraf. 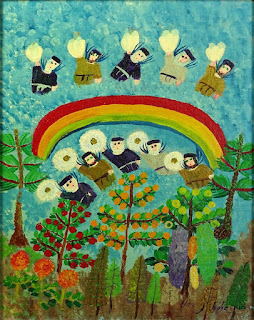 102 Mature: The Art of Harry Lieberman (Color, 1980)
A look at the remarkable life of Harry Lieberman, a primitive artist who picked up painting at 80 and credits it with adding several extra decades to his life.  His artworks are deeply routed in childhood memories as well as Judaic teachings and scripture and resemble a more childlike Marc Chagall.

His work was featured at several New York Galleries incuding one man shows. In this amusing and inspirational documentary, we travel with Harry as he speaks to a Hebrew school class, visits the "youngsters" of 80 and 90 at the Golden Age Home where he began his art career, and extolls 102 years worth of wisdom, humor, and creativity. 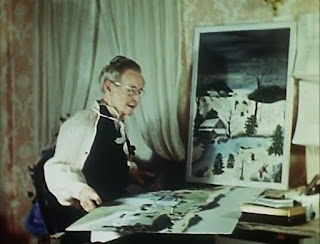 An oddly patronizing and staged documentary on Grandma Moses; this certainly is not cinema verite, but an interesting and beautiful film nonetheless. Easily the most recognizable of American folk artists, this farmer's wife from Vermont was discovered at age 80 and became an international success for the rest of her life (she lived to be 101).  Her happy, primitive paintings with a rejection of perspective celebrate the joys of living a simple and joyful existence and have sold for as much up to $1.2 million.  The film begins with a condescending sequence of Moses cleaning house, bringing water to her grandchildren in the field, and making lunch for everyone on the farm (at 90 mind you), just to remind everyone that she's just a little farm wife at heart.  Then, we visit her studio and examine the memories of childhood that influence her paintings.  The film ends with a lovely montage of dancing closeups of her work, set to classical music. Directed by Jerome Hill and shot in beautiful Technicolor! 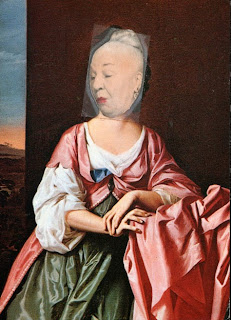 Woo Who? May Wilson (Color, 1970, excerpt)
A portrait of artist May Wilson, former "wife-mother-housekeeper-cook" and a grandmother who, at age 60 after the break-up of her 40-year marriage, moves to New York City and discovers an independent life of her own for the first time. With humor and insight the film shows her acquiring new friends and a new self-image, and we watch her gain success as "Grandma Moses of the Underground." 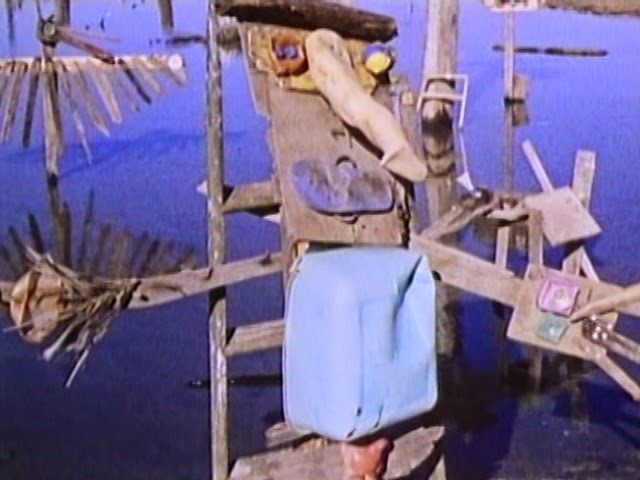 A Boy Creates (Color, 1971)
This non-narrated film - made by the masterful, prolific educational filmmaker Bert Van Bork - follows a young boy as he creates a sculpture of found art, tracing his creative process from imaginative fantasy through to the actual construction of a work of art. It also could be described as a cautionary tale that follows a young boy as he wanders unsupervised around an abandoned amusement park –Playland at the Beach in San Francisco (closed and leveled in 1972), before tending to his army of found art swamp statues once located in the Emeryville Mudflats East of San Francisco.
For more info about the famed (and sadly long gone) Emeryville Mudflats and its artists:http://www.spacesarchives.org/explore/collection/environment/emeryville-mud-flats-aka-driftwood-sculptures--tidal-flats/ 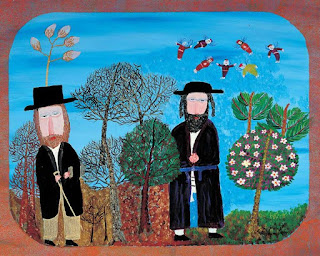 Art in America - Folk Art (Color, 1979)
Explores the production of art which was and is created by self-taught people in both rural and urban America.  From colonial times, the folk artist is shown as one who made everything from paintings and sculpture to tavern signs as a means of earning his living. Due to mass production and mechanical devices,  many of the folk expressions have almost died out. Part of the “Americana” series made by the Handel Corporation.