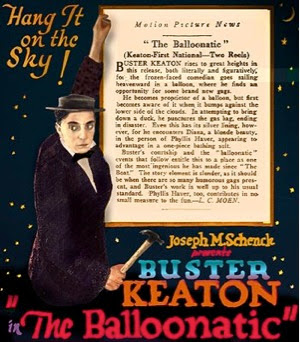 Oddball Films presents Buster Keaton Rides Again, a night of 16mm film shorts from the 1920s-1960s dedicated to that inimitable silent film star Buster Keaton with silent gems, terrific talkies, rarities, commercials, and an intimate documentary inside the mind of the comedic giant. A vaudevillian from the age of five, Keaton was given the name "Buster" by Harry Houdini and began his film career with Fatty Arbuckle at the age of 21, directing and starring in his own films a couple of years later. The films from this silent era are his most enduring--and are inventive, visionary, and as funny as anything that has followed. Unlike his contemporaries Chaplin or Harold Lloyd, Keaton does not mug; he does not implore his audience; he watches calmly along with the audience as chaos unfolds and reacts with his trademark smarts, physical skill and elegance. Films include Cops (1922), a Kafka-esque story of a man on the run from the entire police force; The Balloonatic (1923) with gags galore, this film finds Buster bumbling through each frame, finally whisked away by a rogue hot air balloon and dropped into the woods to fend for himself; Grand Slam Opera (1936) with Keaton performing his juggling act over the radio; the rare documentary Buster Keaton Rides Again (1965) which gives you a rare look behind the scenes of his trademark slapstick style a mere year before his death, and The Railrodder (1965), a modern salute to classic Buster made by The National Film Board of Canada (1965). Plus, Vintage Keaton Commercials and early birds will get the opportunity to see an episode of The Misadventures of Buster Keaton (1950s). Everything screened on 16mm film from our stock footage archive. 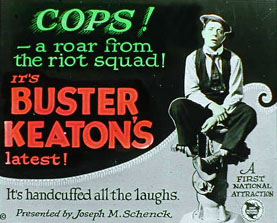 Cops (B+W, 1922)
One of Buster Keaton’s most iconic and brilliantly constructed films it tells the Kafka-esque story of a man who accidentally gets on the wrong side of the Los Angeles Police Department by accidentally throwing a bomb into a police parade and gets chased all over the city by the entire police department. Keaton's efforts to elude them are both inventive and funny. This short also contains the classic sequence with a horse and an overfull wagon load of furniture. One of Keaton's most iconic and brilliantly-constructed short films, “Cops” was deemed "culturally, historically, or aesthetically significant" by the United States Library of Congress and selected for preservation in their National Film Registry in 1997. 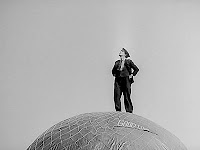 survival. Keaton is accidentally whisked away on a flying balloon, only to get stranded in untamed wild! Fortunately he encounters a woman (Phyllis Haver) who is a skilled outdoorsman. As they attempt to best each other, Keaton and Haver have wild jungle adventures. “The Balloonatic” was one of the last short films Keaton made before moving on to feature length films; but the charm and clever gags are on full display in this brief madcap adventure. 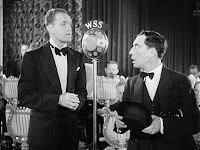 Buster Keaton includes a lot of delightful art deco touches and even more laughs. Keaton stars as Elmer Butts, a juggler with big dreams. After he's forced onto a train by a horde of angry townspeople, he sets out for New York to make his dreams come true... by entering a talent show on the radio (who doesn't want to listen to juggling?) After a few dismissals and more than a few prat falls and ridiculous interruptions, Elmer gets his chance, only to disrupt the entire orchestra with his clumsy shenanigans including getting into a baton fight with the conductor! 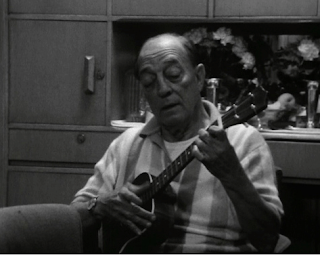 during the filming of “The Railrodder”. It contains the only known footage of Keaton at work behind the camera, revealing the same methods he used to create his classic films of the 1920s. Watch behind-the-scenes footage of Keaton and his wife as well as quirky clips from his earlier films. “Buster Keaton Rides Again” provides an invaluable opportunity to understand his comic genius and, ultimately, the secret of his universal charm and humor. Directed by John Spotton for the National Film Board of Canada and winner of many international awards including prizes from the Montreal International Film Festival and the San Francisco International Film Festival in 1966.

Railrodder (Color, 1965)
A National Film Board of Canada production co-directed by Keaton and Gerald Potterton, this 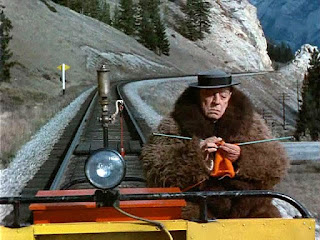 hilarious silent-style movie pulls out all the stops! Portraying an old goofball accidentally traveling by motorized rail cart, Buster Keaton shines here in what would be one of his final roles.

Misadventures of Buster Keaton (B+W, 1950)
Keaton plays himself, and is quite the player (…it would seem). Short-lived though this TV series was, these episodes do retain the certain charm of a real sly survivor.

Plus! Vintage commercials of Buster Keaton!