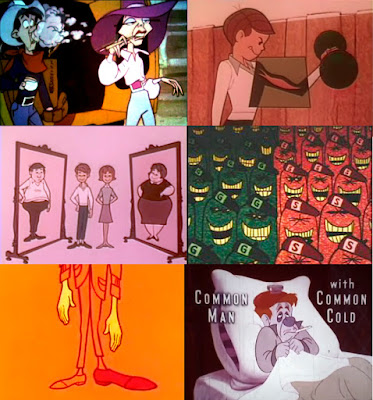 Oddball Films brings you Better Living Through Di$ney - Educational Shorts from the Magic Kingdom. While obviously more well known for their animated features, Di$ney (as Walt Di$ney Educational Media) has been making educational primers since the 1940s with audacious subject matter like menstruation, venereal diseases, war propaganda, drug abuse and more. This program features high/lowlights of Di$ney's educational side with shocking shorts, some animated, some live-action and all Di$ney. In the notorious pseudo-science film White Wilderness: Lemmings (1958), Di$ney filmmakers manufactured a "documentary" about lemming behavior that not only cost dozens of rodents their lives, it changed public perception about the little furballs forever. A goofy cowboy gets pressured into smoking at The Smokey Mountain Dude Ranch in Smoking: The Choice is Yours (1981). In VD Attack Plan (1973), a cartoon syphilitic sergeant directs his VD troops into battle against ignorant humans. Benny's a teen that's got it all, but he might lose it if he trades his friends for steroids in Benny and the 'Roids (1988). Learn all about growing up, from an animated embryonic cycle to adolescent pimples in the zippy musical short Steps Towards Maturity and Growth (1968). From the same series, we learn about The Social Side of Health (1969), including an animated drug trip and more zippy songs, and Physical Fitness and Good Health (1969). Di$ney also got into the war effort with several propaganda cartoons including Don@ld Duck's surreal Nazi nightmare Der Fuehrer's Face (1943) and The Grain That Built a Hemisphere (1943) touting the nearly magic properties of corn. Two dopey guys try to explain computers to a clueless teacher in the dated cheesefest Computers: The Truth of the Matter (1983). Plus, you can learn How to Catch a Cold (1951)! With even more surprises in store, you'll never think of Di$ney the same way again! 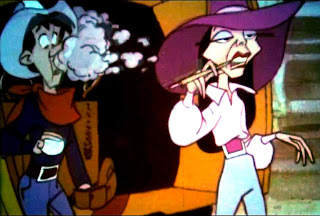 Smoking: The Choice is Yours (Color, 1981)
This goofy anti-smoking cartoon is making its Oddball debut! Edgar is a cowboy who just got a job at the Smokey Mountain Dude Ranch, a haven for outdoorsy tobacconistas run by the Hirschfeldesque Mrs. Hackwell. With everybody smoking, Edgar can't think of a good reason why not to until a badass hot air balloonist teaches him a few things about a smoke free life. 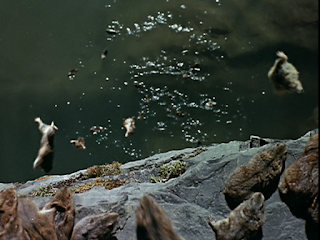 White Wilderness: Lemmings (Color, 1958)
The notorious and heartbreaking segment of Di$ney's Oscar-winning feature documentary White Wilderness that has led to a persistent myth of the mass-suicide of lemmings. No one is sure where the filmmakers got the idea that lemmings love to leap to their deaths, but they managed to import a small population of lemmings to Alberta for the filming, ultimately throwing the furry little rodents off cliffs to drown in "the ocean" (which was actually a river) and influencing public sentiment about the little guys for decades to come. In reality, lemmings don't commit mass-suicides, although in search for new territories, they have been known to accidentally fall of cliffs and drown. 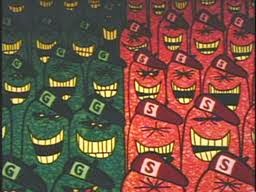 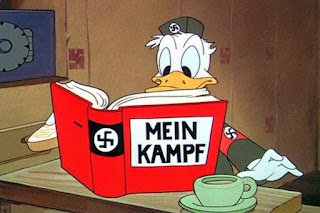 Der Fuehrer's Face (B+W, 1942)
A very different Don@ld short than you've ever seen, in this wartime oddity, Don@ld wakes up as a Nazi. He must wake up early, eat very little and work overtime in a Nazi artillery factory all while german soldiers bark orders at him through a Nazi megaphone. After mere minutes of screwing the tops on artillery shells, he suffers a psychotic break to various refrains of the Spike Jonze titular song. After some psychedelic SS insanity, he's overjoyed to wake up from his terrible dream in good old America again.

The Grain That Built a Hemisphere (Color, 1943)

A different kind of propaganda short from Di$ney, this mini-doc on the importance of corn was made in conjunction with Canadian government. Tracing its roots from the communities of indigenous Americans to the insidious bi-product that invades almost every aspect of our daily lives, this short ends with a blitz of corn patriotism!

Benny and the ‘Roids (Color, 1988)
Benny has got it all; a great looking girlfriend, a best bud and the High School cred. of being on the football team.  But his teammates pick on his puniness and even as he self-indulgently videotapes himself working out, the progress just isn’t fast enough.  The next logical step, ask the beefiest, sketchiest looking guy at the gym where to score some steroids.  How long can Benny keep his perfect life with his dirty little secret, and will it end up being worth it?  As it is a Di$ney production, I’m sure you can guess it won’t be, but you’ll still enjoy your front row ticket to the RAGE! 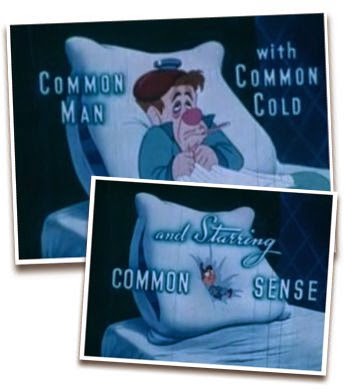 How To Catch A Cold (Color, 1951)
A highly entertaining PSA in lovely Technicolor, produced as a collaboration between Kleenex (not yet a household name, let alone a genericized product) and Disn*y. Distributed freely to schools, it was seen by millions in its day, but now qualifies as a lost treasure.

Computers: The Truth of the Matter (Color, 1983)A goofy live-action intro to computers from Walt Di$ney Educational Services.  Teacher is having a tough time with the new computer club that she's in charge of.  Luckily two dopey guys - the saintly (and portly) Angelo and the no-good Luke who looks like a used car salesman - magically materialize to show her the good, the bad and the awkward in computing.