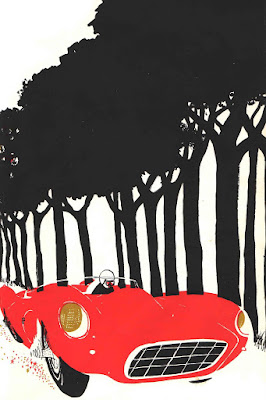 Oddball Films presents Car-Toons: High-Octane Animation, an evening of 16mm animated shorts from the 50s and 60s - the golden age of car culture - with the need for speed. From road rage explosions to educational treasures, mid-century predictions for the future of cars, and stylish children's shorts, it's a night of animation in the fast lane. The little mole has the need for speed and soups up a toy convertible in the stunning Czech animation The Mole and the Car (1963). The National Film Board of Canada and Kaj Pindal bring us What on Earth? (1966) a martian's point of view of our auto-obsessed world. Insane Italian animator Bruno Bozzetto gives us Mr. Rossi Buys a Car (1966) a berserk cartoon in which bureaucracy and road rage lead one man on a bloody rampage throughout the city. Di$ney and dogman Goofy team up to help you be a better driver in two classic edutaining shorts - Motor Mania (1950) - Goofy turns into a road rage monster, and Freeway Phobia (1964) demonstrating how not to drive on a freeway. Another Di$ney classic Magic Highway USA (1958) predicts the future of cars and highways - from self-moulding roads to self-driving cars. British animation duo (and married couple) Halas and Batchelor predict a very different and dark future of a car culture in Automania 2000 (1963). Woody Woodpecker gets taken for a ride by Buzzy Buzzard-used car salesman in Hot Rod Huckster (1954).  Discover Miss Esta Maude's Secret (1966) in a super chic adaptation of the children's book about a mild-mannered school teacher with a hidden hot rod. Plus more high-speed cartoons for the early birds! 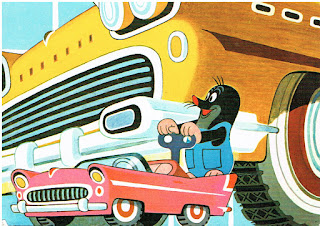 Featuring:The Mole and the Car (Color, 1963)
Another adorable and stylish cartoon from Zdenek Miler's beloved Little Mole series. The little mole wakes up underground beneath a busy street. When he emerges from his tunnel, he sees all the bright shiny and speedy cars and dreams of having one for his very own. After a nasty little boy destroys his toy car and leaves it in the street, our rodent hero fixes her up and speeds off in his very own set of wheels. 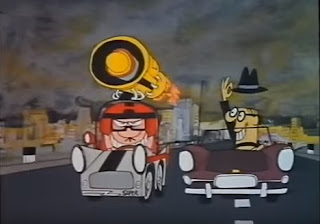 Part of Bruno Bozetto’s (Allegro Non Troppo) great series of psychedelic screwball shorts starring the “everyman” Mr. Rossi. Unbelievable animated hijinks with appropriately off kilter soundscore.  Signor Rossi is in the market for his first car. After ridiculous bouts with bureaucracy, car salesmen, and rude motorists, he eventually loses his cool and goes on a high-speed road rage fueled terror spree throughout the city.
Freeway Phobia (Color, 1964)
(Subtitled The Art Of Driving The Super Highway).
Hilarity naturally ensures when everyone’s favorite talking dog, Goofy, demonstrates how not to drive on the freeway. First, he is the overly timid driver, then the overly aggressive driver, and finally the inattentive driver, shaving or eating. In a dynamic mix of animation styles, Goofy demonstrates how NOT to merge on the freeway, drive with distractions, and basically cause every thinkable accident. 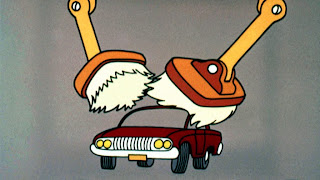 What On Earth! (Color, 1966)
If aliens looked at planet Earth from outer space, what would he or she see? In this film, automobiles are perceives as life forms – with particular habits and behaviors! See beautifully animated lines of cars, dancing figures and stoplights, and other objects dancing. This psychedelic simplified world of shapes and signs, emphasizes consumerism and the ways in which earthlings are being conditioned! Produced by the National Film Board of Canada and directed by Les Drew and Kaj Pindal. 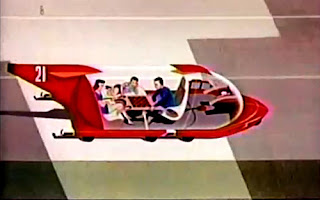 Magic Highway, U.S.A. (Color, 1958, excerpt)
Live action, archival footage, culminating in stunningly beautiful mid-century animation from D*sney examines the past, present (circa 1958) and paleo-future of transportation (*note* a small portion of the end of this wonderful film has been lost no doubt to a hungry high school film projector).

“As father chooses the route in advance on a push-button selector, electronics take
over complete control. Progress can be accurately checked on a synchronized
scanning map. With no driving responsibility, the family relaxes together.
En route business conferences are conducted by television.” 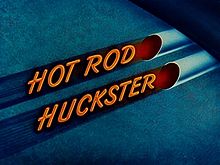 Woody Woodpecker is driving down the city street singing a "screwy" driving song. Used car salesman Buzz Buzzard tries to interest Woody in buying a new car (after sabotaging the one he has). He shows him various cars but they all are utterly lacking in quality and leave a lot to be desired. After getting him to try a hot rod with a record player under the hood (playing a record of "hot rod sounds" which, alas, gets switched to "animal sounds" on the record's other side), Buzz comes up with the idea of rejuvenating Woody's old car and selling it to him at a vast price. Woody's response to this is to put Buzz through the "rejuvenating machine" where the buzzard gets a car built around him and is driven home by Woody!

Miss Esta Maude's Secret (Color, 1964)
A super chic 1960s rendering of a beloved children's book from W.T. Cummings about a school teacher's hidden need for speed. Her secret is a slick hot rod she speeds around in when nobody's looking. 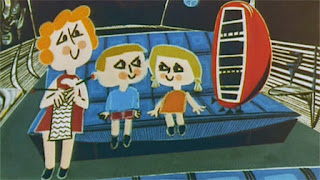 Automania 2000 (Color, 1963)
A satyric tour-de-force, this prophetic and humorous film concerns the state of the world at the millennium. Uncannily accurate in its prediction, the film shows the result of technology gone mad. In the race to produce bigger and better cars we see how humanity adapts to life in a grid-locked world. One of the Halas & Batchelor Studio’s finest films, Automania 2000 was a prize winner all round the world, including an Oscar nomination and a British Academy Award. 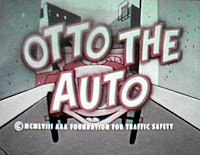 Otto the Auto in Buckle Up (Color, 1976)
A little girl doesn't want to put on her seat belt. Will she learn to do what's safe with the help of a talking car, an alien, some astronauts and her parents? Let's hope so! 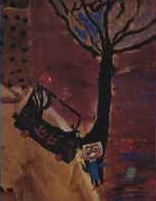 Alexander and the Car With the Missing Headlight (Color, 1966)
An iconographic motion picture based on drawings made by kindergarten children in Paris, France, which show the adventures of Alexander on sea and land as he drives his car around the world while meeting different creatures and people. This classic children's film tells the story of a little old car which escapes from a junkyard and crashes into a tree right outside Alexander's house. The left headlight is broken, but Alexander manages to fix it and together they go off on a journey that leads from Paris to the jungle and back home again. On the way they have many adventures, pick up various animals and damage the headlight once again. The film is based on drawings by French children, uses sound effects by children in West Germany and the voices of children in the United States. 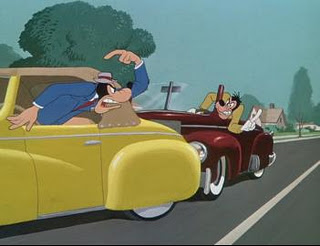