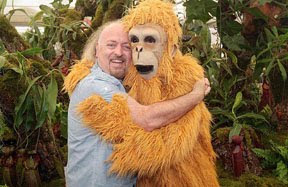 While similar in physical appearance to humans monkeys are very far removed from us so-called thinking beings. Still, humans insist on dressing up monkeys for their own amusement. While these animals certainly have a better fate than cows, pigs or chickens they nonetheless suffer for our amusement. In this program we examine and explore the hilarious and sublime lengths humans go to entertain us via these proxy mammals. Before the heyday of television and the domination of cinema, vaudeville, theater, circus acts, magic shows, impossible and death-defying stunts were all that amused thrill-seeking audiences across the US. Animal acts were a big hit and monkeys basked in their glory.

“Lancelot Link, Secret Chimp” (1971) in “To Tell the Tooth”. Get Smart meets James Bond in this TV spy spoof as the top agent of APE (Agency to Prevent Evil) detective Lance Link discovers a dentist working for C.H.U.M.P. (Criminal Headquarters for Underworld Master Plan) has been inserting secret radio transmitters into the teeth of military officials. For more about this crime fighting primate click here.

Watch them get trained for circus and onstage action!

“Chimp the Cowboy” (1937) + ”Chimp the Fireman” (1936) Mischievous chimp comedies feature a trained chimp donning various costumes playing multiple “career” roles.
Movie Trailers for the “Planet of the Apes” films (1970s)
Watch half men, half apes battle it out in these 3 classic trailers!

“Snow Monkeys of Japan” (1963) Visual appreciation of the Japanese Snow Monkey as an intelligent, beautiful animal.

“Monkeys, Apes and Man: The Chasm” (1971)
An overview of the monkey-man link, this film follows Dian Fossey into the Central African rain forest to study mountain gorillas, Jane Goodall into Tanzania to study Chimpanzees, Japanese scientists to Koshima Island where they are studying the macaque and Wisconsin scientists to their laboratories where they study rhesus monkeys.

Plus! “King Kong”, “Barrel of Monkeys” Chimps in Space + much, more!