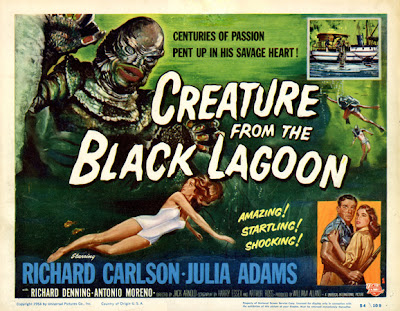 Oddball Films and guest curator Emily Schleiner present The Scene of the Mutant Gene!, featuring films about DNA, heredity, mutants, and genetic throwbacks!  Be amazed by the antics of mutant monsters, heredity, inheritance and see the results of science experiments on DNA long before  Jurassic Park made its debut and Dolly the sheep walked the Earth! This program features excerpts from Creature From The Black Lagoon, a water monster spine-tingler from 1954, directed by Jack Arnold and starring Richard Carlson and Julia Adams. This film series awed 1950s audiences with nothing less than a fish-humanoid monster with a penchant for lady scientists! Future Shock, a 1972 documentary narrated by Orson Welles, about speedy future technologies and our human inability to keep up with the times; segments from the creature feature sequel Revenge of the Creature (1955) - the monster transplanted to a water park in Florida, only to fall for the beautiful scientist overseeing it (him?) again!  In the dated and British-English accented A Clone of Frogs (1979) documentary, scientists create albino frogs. See the amazingly small tools and substances these scientists use when creating clones!  The Double Helix (1960s) will teach you about the complex machinery used to study DNA and view a photograph of the moment when DNA splits! Find out whether dinosaurs still walk the Earth when a group of stalwart scientist explorers follow a journal entry written by their deceased colleague in the 1925 silent classic A Lost World, directed by Harry O. Hoyt with stop motion special effects by Willis O'Brien. In My Mother Was Never a Kid (1980s) a young girl travels back in time to meet her mother as a girl, discovering just how similar they really are!  In the final creature sequel, The Creature Walks Among Us (1956), the renegade monster is captured and changed into an air-breathing monster by a wealthy scientist, making the monster truly unstoppable!  Plus!  Excerpts from a 1935 version of Dante’s Inferno in which a wayward father attempts to derail his son from a path of greed and treachery.  Scenes of smoke machines and writhing semi-clothed people abound!

Creature from the Black Lagoon (1954, B&W)
In this 1954 monster horror film directed by Jack Arnold, and starring Richard Carlson, Julia Adams, Richard Denning, Antonio Moreno, and Whit Bissell, a fish-humanoid monster goes after the scientists who study it.  The creature lurks in his lagoon, excited by human visitors!

Future Shock (1972, color)
Synthesizer keyboard sounds set the futuristic stage in the1972 Future Shock short documentary film directed by Alex Grasshoff, narrated by Orson Welles, and based on the best-selling book Future Shock by Alvin Toffler. In this film, learn about how technology is moving too quickly for humans to keep up with it, leading us to experience future shock. Some of the “shocking” material in this show is hilariously banal to us today, and some of it has not (yet?) come to pass! 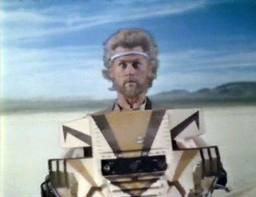 
Revenge of the Creature is the first sequel to Creature from the Black Lagoon. Having survived being riddled with bullets at the end of The Creature from the Black Lagoon, the monster is captured and sent to the Ocean Harbor Oceanarium in Florida, where it is studied by an animal-psychologist and ichthyology student.  Ultimately, the fish-humanoid monster escapes from his tank, killing the psychologist in the process, and flees to the open ocean. But! The monster is obsessed with Helen the ichthyology student, whom he abducts.  Will she manage to escape?!


A Clone of Frogs (1979, color)
In this documentary Dr. John Gurdon of Oxford illustrates each step in a complex frog cloning process. Nuclear transplantation is the method used to clone!  Time lapse photography shows an injected cell dividing and developing into an albino tadpole.  Tanks of frogs abound in this lovely short film! 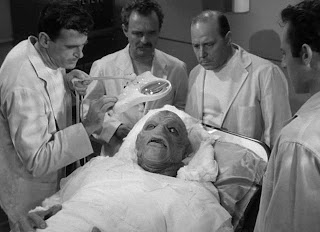 The Creature Walks Among Us (1956, B&W)
This film, directed by John Sherwood and starring Jeff Morrow, Rex Reason and Leigh Snowden, is the third and final installment of the Creature from the Black Lagoon horror film series from Universal Pictures, following 1955's Revenge of the Creature. Here, the creature is captured in the Everglades, and, with his scales burned off, given human clothing.  The monster longs for the ocean and when it is unjustly blamed for a murder, it goes on a rampage!

Double Helix (1960s, color)
In this colorful 1960s documentary learn about complex machinery used to study DNA, and see footage of the 3 discoverers of DNA: Watson, Wilkins and Crick, who won the Nobel Prize for their discovery.  See representations of the basic building blocks of DNA.  And also, take a look at a photograph of the moment when DNA splits and life reproduces!

The Lost World (1925, B&W)
The Lost World is a 1925 silent film based on Arthur Conan Doyle's 1912 novel, directed by Harry O. Hoyt with pioneering stop motion special effects by Willis O'Brien.  The story begins in 1912 in a men's club, when a young woman brings her father’s journal and map to a group of scientists, who immediately begin their journey. They go down a jungle river with jaguars and monkeys.  Eventually the explorers see a dinosaur - a pterodactyl, which flies high above and has a nest! They also see a brontosaurus, which is then attacked by an allosaurus!! Future (1980, color)
Similarly named and themed as the documentary Future Shock, this film is a montage of imagery on the topic of speedy technology.  Scenes of DNA modification of food, human life extension and many other dramatic images abound.  This film is part commercial, part documentary, and chock full of technology starting with planets and iridescent matter!

My Mother Was Never a Kid (1981, color)
In this after school special from 1981, an irate teenage girl plays pranks on her teachers and smokes in the bathroom.  She gets lectured by her mother and runs out of the house only to jump into the subway and hit her head.  When she wakes up, she has traveled back in time only to encounter her own mother as a girl!  Boys, cigarrets, stealing!  These ladies have a lot in common! 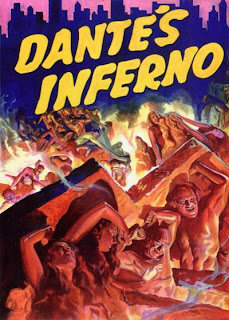 A vision of hell is presented to a son by a father on his deathbed to turn him from his ruinous path. A robed figure, maybe Virgil, points to a river with a lone boat on it. Rows of hooded figures march up a mountain path. Smoke and fire spirit through the rocky cliffs. Women and men flail and make tortured movements. Fire rages, everything looks painful. Men push large stones uphill. Large clusters of naked people splattered across the rocks. A large dead tree with people growing out like branches. People chained across chasms of fire, diving in. Flames rain down like waves. The son at his father’s bedside seems troubled, alarmed.  A father attempts to thwart heredity and his son’s similar choice-making by giving the son a glimpse of hell populated by writhing bodies, disco lighting, and very flame-y flames.

Curator bio:
Emily Schleiner is a Brooklyn and Davis CA-based new media artist and thinker.  She has been writing since 2009 and has shown internationally.  She has been published in the Trondheim's TEKS's 'Making Reality Real' Journal and has presented at the 2nd Inter-Disciplinary.net Global Conference in Budapest. She received her Masters from Performance and Interactive Media Arts department at Brooklyn College, NY in 2010.