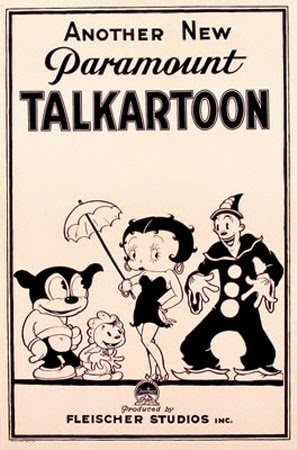 Oddball Films and curator Kat Shuchter bring you Animation's Early Days, an evening of animation from the 1910s through the early 1930s hand-picked from the collection, including several super-rarities you won't see anywhere else.  From the kooky to the spooky, silly to the sexy with a little Rudolf Ising, Friz Freleng, Paul Terry, the Fleischer Brothers, Lotte Reiniger, Ladislas Starevich, Walt Di$ney and imitators, just to name a few.  Our earliest film; Ladislas Starevich's Cameraman's Revenge (1912) was one of the very first puppet films and features a delightful insect story of love, sex and betrayal. We have 3 silent Felix the Cat cartoons; the first merchandised cartoon character: All Puzzled (1924), Felix Goes A Hunting (1923) and Felix Hyps the Hippo (1924).  Many early cartoons were animated versions of comic strips, like the many faces of Krazy Kat, from one of his earliest cartoons Mouse-Trapped (1916) to a more Mickeyesque persona in Krazy Spooks (1934) We have a double shot of Paul Terry's Aesop's Fables (before his Terrytoon period: the charming silent fable Venus and the Cat (1921) and the super rare mechanized mousy mayhem of Radio-Controlled (1926).  Walt Di$ney and Ub Iwerks' Steambo@t Willie (1928) is considered the first sync-sound cartoon (thought the Fleischers had introduced a less-precise method years earlier) and features Mick*y Mouse and all his lovable cheerfulness. After the wild success of Steambo@t Willie, the animation world was abuzz with Mickey imitations, like the train conducting fox of Hugh Harman and Rudolf Ising's eternally peppy Smile, Darn Ya Smile (1931). Also from Ising and Harman, there's the Bosko cartoon The Tree's Knees (1931) and a castle full of bouncing jesters and guards in The Queen was in the Parlor (1932).  The Fleischer brothers bring us a triple shot of the Queen of cartoons, Betty Boop: The Dancing Fool (1932), The Old Man and the Mountain (1931) and Minnie the Moocher (1931) co-starring Cab Calloway as a dancing walrus. From the exquisite Lotte Reiniger; one of her breathtaking silhouette puppet films Galathea: Das Lebende Marmorbild (1935). And just when you thought it was safe to bring the kids, we just uncovered a "new" complete print of the very first pornographic cartoon Buried Treasure (1928) starring the overly-endowed Eveready Harton. Come a little early for an overview of animation before the days of film with Animated Cartoons: The Toy That Grew Up (1947). Plus, a silent cartoon giveaway! All films will be screened from 16mm prints from the archive. 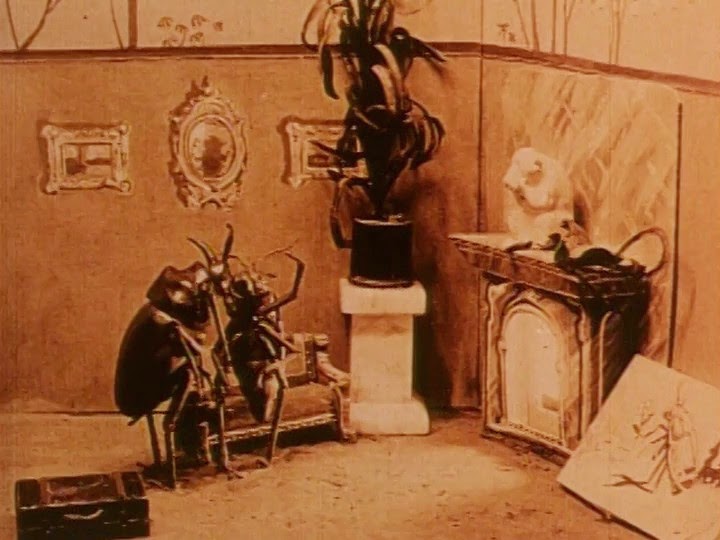 Revenge of the Kinematograph Cameraman (The Cameraman’s Revenge) (1912, B+W)


Wildly inventive landmark of early cinema and stop motion animation, insects star in this Kafkaesque love triangle.  Polish director Ladislas Starévich, working in Russia, started out as an entomologist when he tried to replicate a bug battle he had witnessed. His experiment was so successful and satisfying that he continued with animation.

Felix the Cat in All Puzzled (B+W, 1924)
Felix tries to solve a crossword puzzle for his owner. His only clue is a word found in Russia. He steps outside in house and is kicked in the ass by a donkey all the way to Russia. In Russia he’s accused of being a spy. He’s then chased by a Russian and finds documented plans for a Russian revolt. Russians throw bombs at him, his tail falls off and he is then catapulted home by the force of an exploding bomb. Phew! 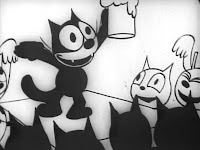 In this rare and unique animated silent film from the 1920s, Felix the cat tries to teach a man to hunt rabbit in order to please his wife.  She complains to her husband, “All the neighbors have fur coats but me!” (And she says this via an animated thought bubble!)  Felix offers to shoot him some rabbits.  Felix chases a rabbit into a tree and then dukes it out with the rabbit inside the tree, finally getting dumped out of the tree along with a black bear!  What will happen next?!  In the next Felix cartoon, he chases and bats a mouse around who eventually hypnotizes him.  Felix doesn’t know what happened and is confused.  From the book “How to be a Hypnotist” can he learn to hypnotize as well?! 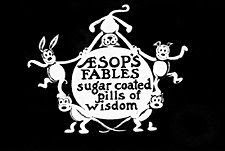 Venus and the Cat (Paul Terry, 1921, B+W)
You know how it is, the Goddess of Love floats in her hatchback cloud, just seeing where she can help mere mortals out.  She has strange solution for the domestic squabbles of a crusty farmer and his mischief-making cat: she makes the cat his wife! From American Aesop's Fables Studio.

Smile, Darn Ya, Smile (B+W, 1931, Hugh Harman and Rudolf Ising)
Streetcar routes in Merrie Melodies are off the rails!  Foxy can take the challenge of hefty hippos or wayward cows in his stride when he has the jaunty title tune to keep him bouncing along. Loaded with the surreal touches that give any era a roaring 20’s jolt, it’s a must-see cartoon classic. 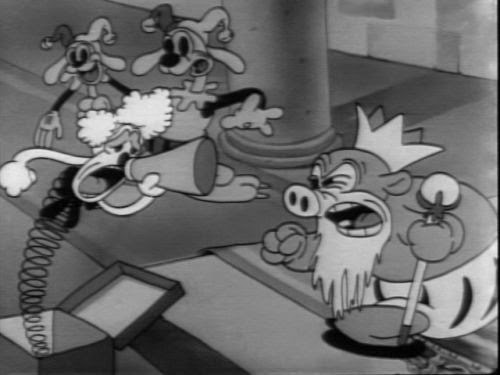 The Queen was in the Parlor
(B+W, 1932, Hugh Harman and Rudolf Ising)
An endlessly entertaining early Merrie Melodies short, animated by Isadore "Friz" Freleng.  It's a madcap castle full of bouncing and singing guards, wacky jesters, and a rotund king and just teeming with sight-gags and medieval merriment.

Bosko goes into the woods to cut down a tree, but is dissuaded by a squirrel and some seedlings.  He encounters various woodland dancers and musical instruments as he goes through the forest. Bosko plays the harmonica to a tree. He chases a squirrel. A bird sings to its nest while the tree rocks the nest with baby birds. Bosko gets spit on by the bird. He chases a butterfly and plays tree trunks as if they were a harp. Tree plays itself like a violin. A  willow tree weeps. Pussy willows meow. Mickey Mouse see saws and saves a mouse in a pond.

Minnie the Moocher (B+W, 1931, Dave Fleischer)
We’d be saps if we didn’t include Betty Boop! After a fight with her folks, Miss Boop runs away from home, and all its surreal comforts -- and takes Bimbo with her! Taking refuge in a hollow of a tree, they encounter hostly beings! Cab Calloway and his band provide most of the short's score appear in a live-action introduction. The thirty-second live-action segment is the earliest-known film footage of Calloway, whose gyrations were rotoscoped for the spooky, singing walrus.


Bimbo and Koko are sign painters hired to paint the lettering on the window of “Betty Boop’s Dancing School". Inside Betty teaches her friends how to shake their tail feathers to the tune of "Dancing to Save Your Soul." This cartoon provides us with a glimpse of the kind of dancing and outfits that would be banned from Betty’s cartoons only two years later.


Krazy Kat jumps back to the screen from the comic strip, (looking a lot like one Mr. M. Mouse) to battle ghosts, skeletons and gorillas in this silly short. Krazy Kat and his sweetheart (with a curiously tiny puppy in tow), head into a haunted house and squeal at everything!  The puppy tangles with a skeleton to adorable and hilarious effect, but when the danger becomes real, will they be able to fight off a Poe-esque twist?

Lotte Reiniger, fascinated with Chinese silhouette puppetry, was the first to create a feature length animated film, the Adventures of Prince Achmed (1926). Her paper cut- outs are phenomenally intricate and lush, with dreamlike imagery and unlike any other form of animation.   In this playful rendition of the Pygmalion myth, Reiniger gets meta: as Pygmalion’s inanimate sculpture comes to life by the unseen hand of Aphrodite, so Reinger bestows her paper cutouts with fluidly graceful movement, with life! And (if this metaphor may be stretched little further), as Pygmalion falls in love with Galathea, so, too, do we with this film. 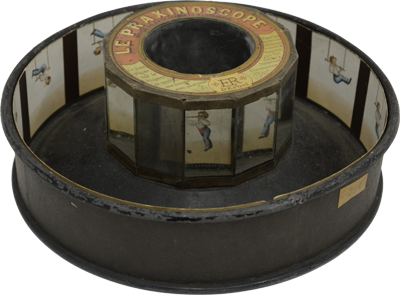