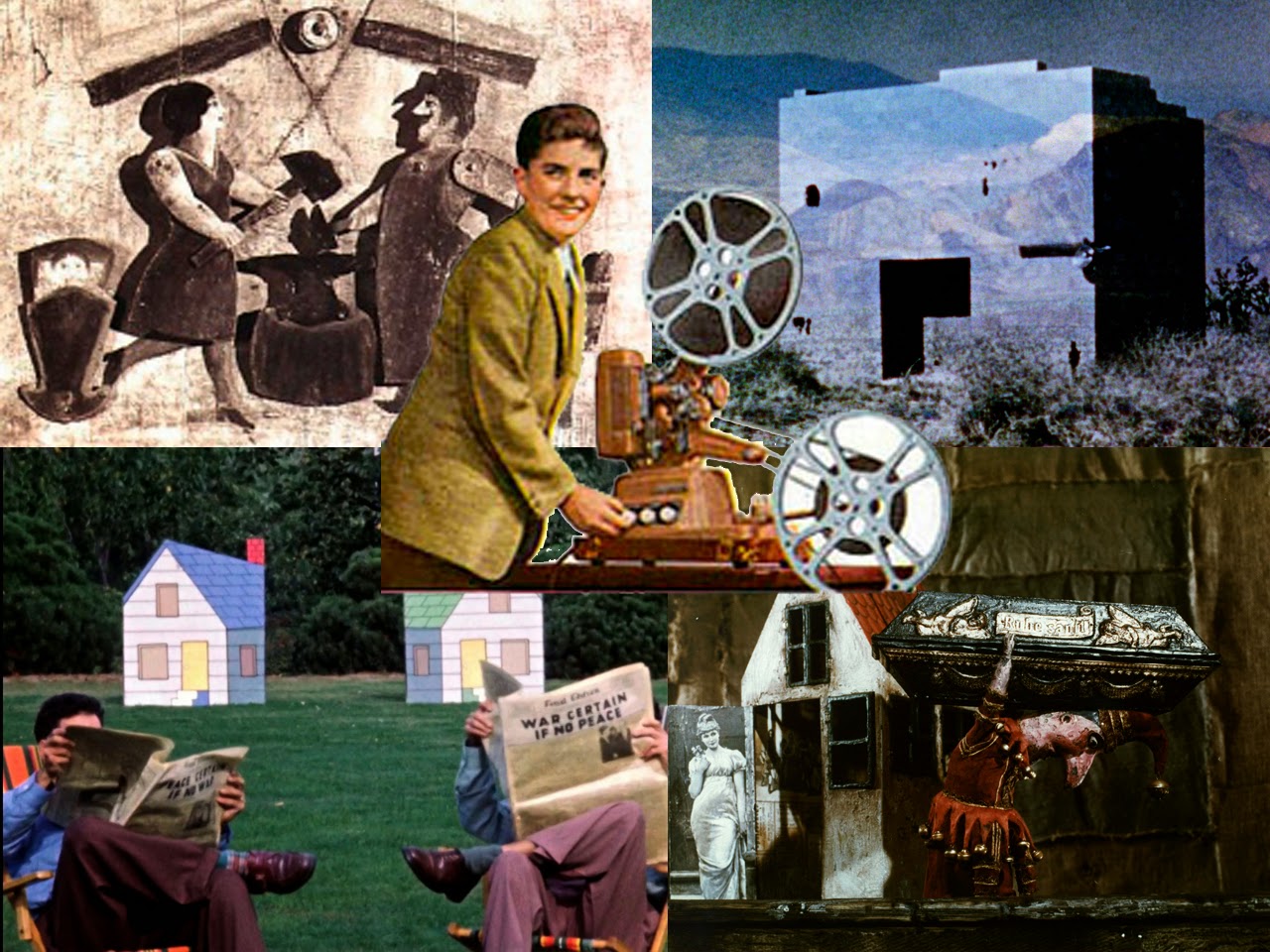 Oddball Films welcomes filmmaker and archivist John Cannizzaro to our Cinema Soiree, a monthly soiree featuring visiting authors, filmmakers and curators presenting and sharing cinema insights and films. John Cannizzaro is a filmmaker whose works rotate between stop-motion animation and experimental films - often with an ethnographic element to them. As an archivist, his large collection of 16mm film prints center mainly around those very topics; ethnography, experimental works and stop motion animation. Cannizzaro will be visiting from Los Angeles and bringing you an eclectic batch of rare and unusual 16mm gems from the archives of Smokehouse Films and discussing his process of compiling and curating his focused archive of rare and remarkable 16mm films and about the importance of saving and presenting these works to the public.  His dose of cinematic, sideshow oddities includes early works of ever-increasing violence by animation masters Jan Svankmajer - Rakvickarna (Czech 1966) – where two puppets become involved in an escalating war over a fine guinea pig: and Norman McLaren’s Neighbors (Canada 1962) - about two people who come to blows over the possession of a flower.   More heated animation with Miroslav Stepanek’s Shooting Gallery (Czech 1969) - an attack on totalitarianism; Dan McLaughlin’s Claude (USA 1963) – about a little boy who, while busy working on some kind of electronic box, is constantly berated by his parents; and Csaba Varga’s Augusta Makes Herself Beautiful (Hungary 1983) – where the violence is turned on herself as the title character tries everything in order to make herself look beautiful.  The strange world of Ethnographic film is explored in Asch and Chagnon’s Children's Magical Death (USA 1974) - imitating their fathers, young boys pretend to be shamans; and in Hermann Schlenker’s Men's Dances (Germany 1971) – where Afghan men act out a drama through dance.  Quirky narrative shorts include Alexander Hammid’s Gentleman In Room 6 (USA 1952) – an early first person narrative; and Ante Zaninovic’s Weekend (Yugoslavia 1972) – an interesting solution to dealing with the elderly.  The avant garde rears its beautiful head with Pat O’Neill’s mind blowing Sidewinder's Delta (USA 1976) - a kind of indirect Western; a meditation on the myth of wilderness.  Plus a few other surprises! 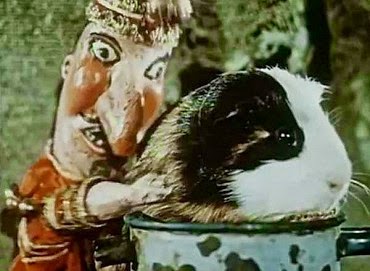 Rakvickarna (Czech 1966)
Also known as The Coffin Factory and The Lych House – Master stop-motion animator Jan Svankmajer’s film features two puppets, Punch and Jody (mis-titled as "Judy" - Jody has always been a male counterpart to Punch in his puppet plays, even though Punch does has a wife named Judy) who become involved in an escalating war with large mallets over a botched attempt to barter over a fine guinea pig. 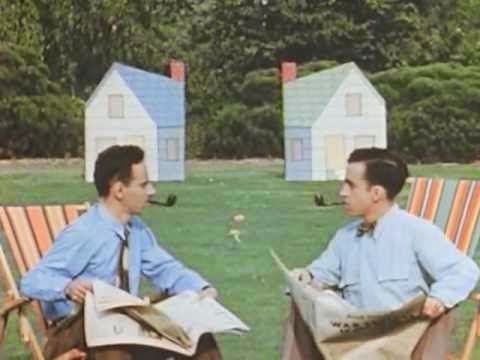 Neighbors (Canada 1962)
In this Oscar®-winning short film, Norman McLaren employs the principles normally used to put drawings or puppets into motion to animate live actors. The story is a parable about two people who come to blows over the possession of a flower.  Two neighbors live peacefully in adjacent cardboard houses. When a flower blooms between their houses, they fight each other to the death over the ownership of the single small flower.

Gentleman in Room 6 (USA 1952)
Directed in 1952 by Alexander Hammid (husband of Maya Deren and co-director of the timeless classic MESHES OF THE AFTERNOON) and scripted by Sidney Carroll, with cinematography by Boris Kaufman (brother of Dziga Vertov) is a concise, powerful story with a surprise ending.  A story in which the camera is used as the eye and mind of a forgotten man - the audience sees the story through his eyes as a voice speaks his thoughts. 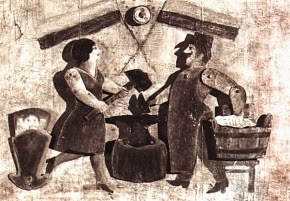 Shooting Gallery (Czech 1969)
This film revives the simple art of folk artists from old market shooting galleries to discover and express their naive poesy. It tells a symbolic story about an encounter of tender feeling and brutal violence.  Czech animator, Miroslav Stepanek, uses the shooting gallery as an attack on totalitarianism.

Augusta Makes Herself Beautiful (Hungary 1983)
A claymation masterpiece by Hungarian director Csaba Varga - Augusta tries everything in order to make herself look beautiful.

Claude (USA 1963)
A subtle but biting comment on the generation gap by the director of GOD IS DOG SPELLED BACKWARDS- Dan McLaughlin. In this award winning film, McLaughlin, who runs the UCLA Animation Workshop and teaches at the Art Center College of Design, produced a slick, polished cartoon film comparable in production values and artistry to the top Hollywood standards. It deals with a family who have a communication problem. The parents repeatedly inform the son that he is in their way, while he silently works on an ever-increasingly complex gadget he's tinkering with. When he can no longer stand their repetitious criticism, he takes matters into his own hands. 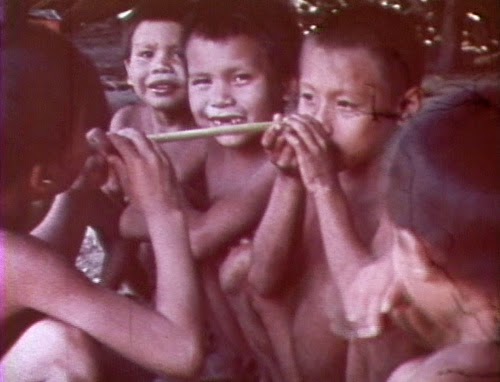 Children's Magical Death (USA 1974)
Part of the Yanomamo Indian series of films made by Timothy Asch and Napoleon Chagnon in Venezuela - a group of young boys imitating their fathers, and pretending to be shamans, blow ashes into each other's noses and chant to the hekura spirits.

Men's Dances (Germany 1971)
The Pushtu men act out a drama. A mountain giant is portrayed by a cross like figure. This devil is attacked by a brave man, who is wounded, but eventually wins. Another actor in a mask also represents a Yeti or a devil.  The Mountain peoples of Central Asia series: Peoples of Badakhstan, Afghanistan. A Julien Bryan and an International Film Foundation presentation - directed and photographed by famed documentarian Hermann Schlenker. 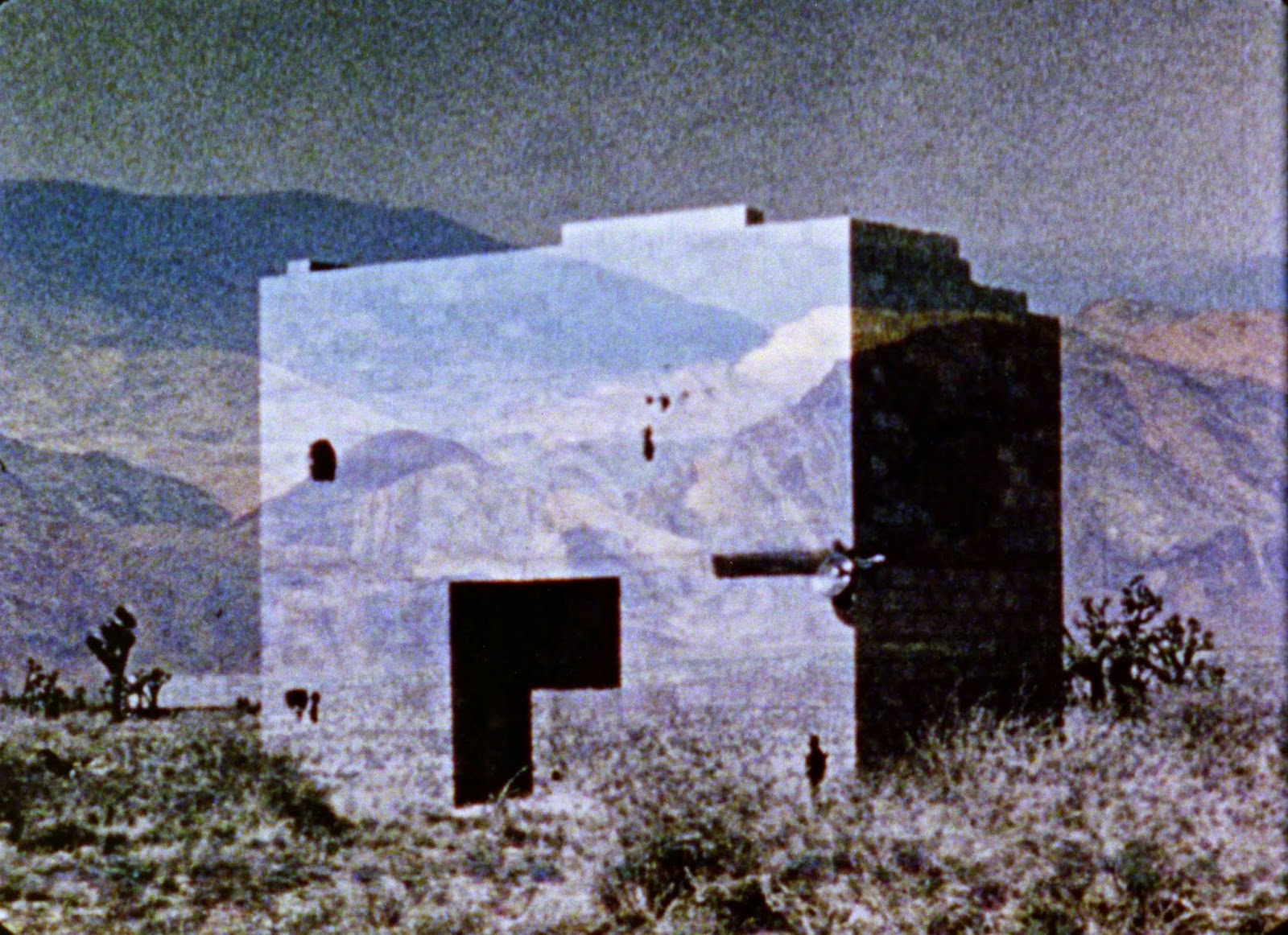 Sidewinder's Delta (USA 1976)
Famed experimental filmmaker Pat O’Neill’s mesmerizing tour de force landscape film that’s as beautiful as it is thought provoking. Sidewinder’s Delta was initially imagined as a kind of indirect Western, a meditation on the myth of wilderness. The title conjures a riverbed full of snakes-creatures that move by thrusting their bodies forward in a series of loops, recalling the mechanical gist of optical printer and film projector - but delta is also the scientific symbol for change.

Weekend (Yugoslavia 1972)
Ante Zaninovic’s biting satire about dealing with our elderly.  A young boy and his family take a day trip to the country with an aging Grandpa… 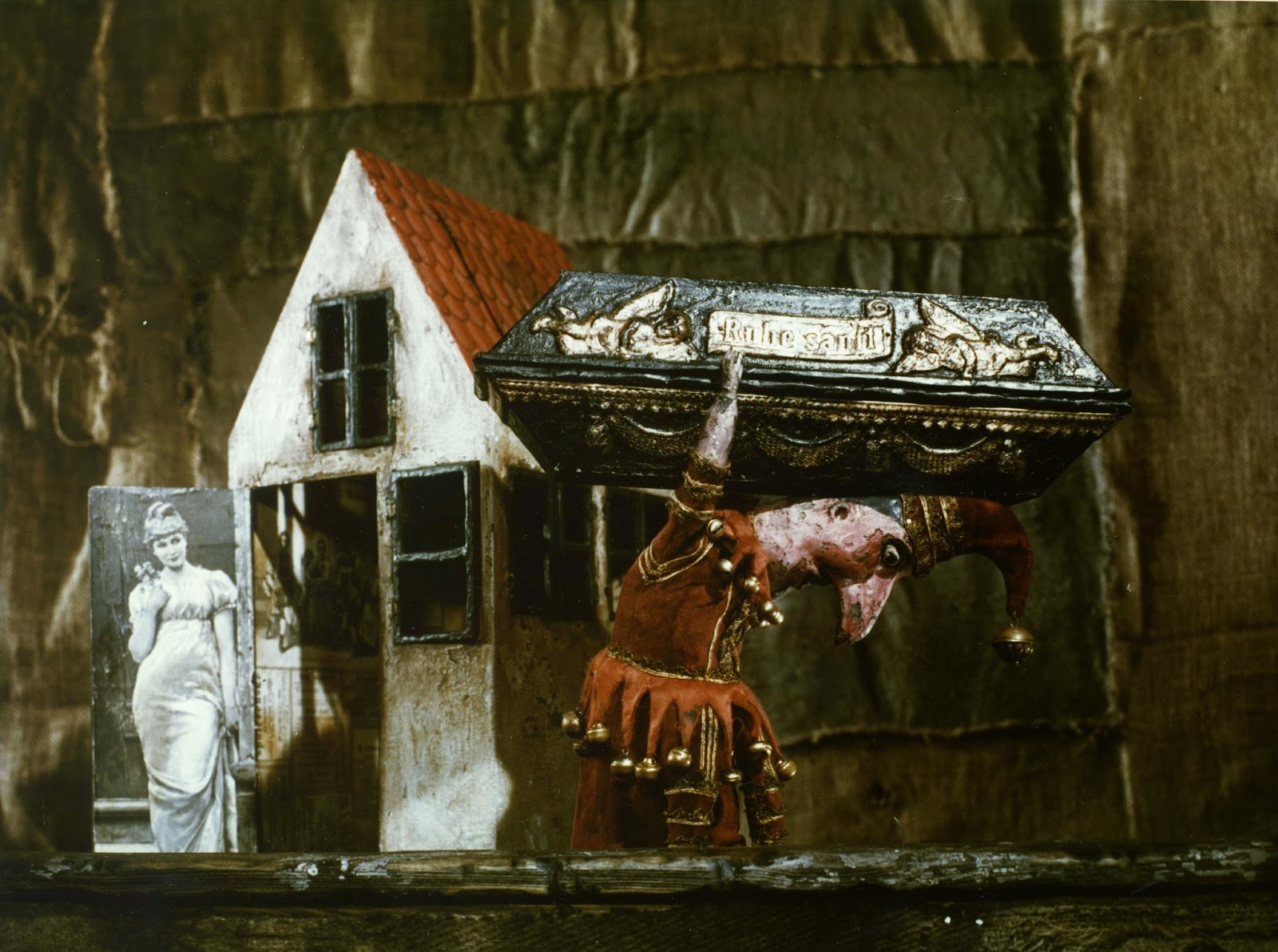 John Cannizzaro grew up in New England where he made several short films before relocating to Los Angeles in 1990.  There, he completed his first mini-feature, Critical Mass, which was reviewed by Paul Malcolm in the Nov. 22, 1996 LA Weekly as a “low key tale of guttersnipe mysticism…Critical Mass is heavy on mood and symbolism with Cannizzaro drawing some beautiful compositions…What’s most intriguing about the film is the connection it makes between spiritualism and ennui”. Still working primarily in Super 8 film, he has completed several more short films including Gulliver’s Travels and 50 Feet That Shook The World (both made for LA Flicker’s ‘Attack of the 50 Foot Reels’ which have played in festivals around the world) as well as a full-length feature film The Left Hand Path.  He is also the founder of Smokehouse Films – a film production company and an ever increasing archive of rare ethnographic, experimental, and animated 16mm films.

Smokehouse Films - founded by John Cannizzaro in 1996 - started as a production company primarily involved with the production of films by himself as well as films by a few close knit friends; all making films independently and outside of the Hollywood system.  Around 1997, Cannizzaro started to gather films for a “found footage” project.  As he proceeded, he realized he could also collect those films that he had seen growing up, the ones that had affected him so much that he became a filmmaker himself, as well acquire the rarer titles that were only heard of and read about in fascinating areas such as Anthropology and cultural studies – titles that many colleges around the country were quickly liquidating.   Slowly, Smokehouse Films has grown to approximately 4,000 prints – mostly in the areas of Ethnographic films, stop-motion animated films (both foreign and American), and experimental or Avant-Garde works.  Many of these films have never made the transition to video or DVD, and so constitute a vast area of knowledge and history that needs to be “preserved” for future studies and enjoyment.  To that end, Smokehouse Films has opened its archives over the last few years to multiple screenings. Although most of them have been in Los Angeles, they have also branched out to screenings as far as San Francisco, Texas, Vermont, and New York.
Email ThisBlogThis!Share to TwitterShare to FacebookShare to Pinterest
Newer Post Older Post Home