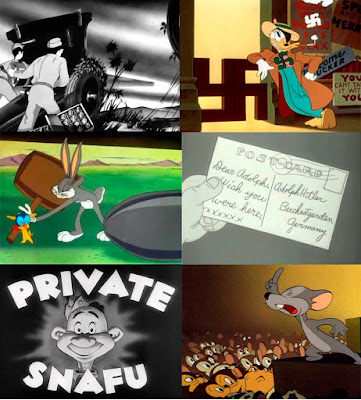 Oddball Films and curator Kat Shuchter present Cartoons go to War: Animated Propaganda from WWII, a night of outlandish, hilarious and didactic cartoons from the 1940s (and a couple from the 1930s) calling for a patriotic spirit, heralding the soldiers, shilling war bonds and warning against the scourges of malaria and The Axis Powers. During World War II, cartoons changed to reflect the times, both heralding and roasting the war effort, doing their part to grease the American propaganda machine, demonizing the enemy and guilting viewers into patriotism, or simply just adding a bit of humor into an otherwise trying era.  Porky Pig reveals all America's goofiest secrets when he presents a faux-propaganda satire in Meet John Doughboy (1941).  Humor meets education in the US Army’s propaganda short Private Snafu vs. Malaria Mike (1944) written by Theodore "Dr. Seuss" Geisel which shows Snafu (Situation Normal All F*cked Up) learning the hard way about the consequences of not protecting himself from malaria infection. Mosquitoes go to boot camp in the hilarious send up of War-time newsreels in Of Thee I Sting (1946). Di$ney got into the war effort in a number of films from a variety of perspectives.  In The Spirit of '43 (1943), Don@ld Duck is guilt tripped into filing his taxes (to defeat The Axis!); while in The Grain that Built a Hemisphere (1943), Di$ney touts the miracle properties of that native grain: corn; and in allegorical fashion, Chicken Little (1943) warns of falling for sweet-talking foxes reading from Mein Kampf.  From Friz Freleng comes a similar allegory: Fifth Column Mouse (1943) only with a freewheeling community of mice that become slaves to a hungry cat until they stand up and fight back with a mechanical bulldog. Bugs Bunny gets in the patriotic spirit when he attempts to thwart a tiny gremlin hell-bent on detonating bombs at a US air base, in Falling Hare (1943).  The puppetoons take to the skies in George Pal's Sky Pirates (1938). Funny pages favorites Nancy and Sluggo help raise money for war bonds in Nancy and Sluggo Doin' Their Part (1944).  One World Or None (1946) is a postwar film warning against the new threat of total global nuclear annihilation.  Plus, an early version of Porky Pig in Boom Boom (1936), Woody Woodpecker flies a PU-2 bomber (get it? PU?) in Ace in the Hole (1942) and more surprises for the early birds! 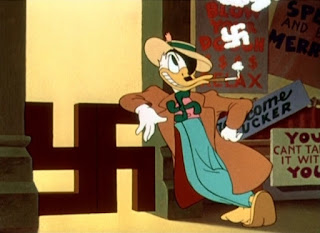 The Spirit of '43 (B+W, 1943)
Don@ld Duck is here to tell everyone to file their taxes ("Taxes to defeat the axis!") in this didactic propaganda piece from Di$ney.  Donald has just gotten his paycheck and he's got an angel and a devil trying to tell him how to spend his money.  The angel, a kilt-wearing Scotsman that may or may not be Scrooge McDuck, urges Donald to file his taxes and give his money to helping the war effort.  The devil - a zoot-suiter - wants Donald to have a good time with his cash.  When the devil turns out to be  a Nazi covered in swastikas, Donald's right on his way to his accountant!

Private Snafu vs. Malaria Mike (B+W, 1944, Chuck Jones)
Keep those pants up, Private Snafu! A cunning mosquito is loaded with malaria and he’s eying your USDA choice rump! The witty Private Snafu series was designed to convey vital information to servicemen who had wildly varying levels of education and literacy skills. Made by the folks who brought you Looney Tunes, this one was written by Theodore Geisel, aka Dr. Seuss! 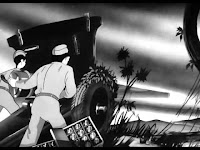 America's Defense Effort is caricatured in this phony newsreel introduced by Porky Pig.  Full of goofy site-gags and jokes about the draft, the mess hall and the clucking machine gun nests, this isn't quite propaganda as much as satire. Jack Benny and Rochester are a secret weapon in an uncomfortably racist moment in an otherwise tame and hilarious cartoon. 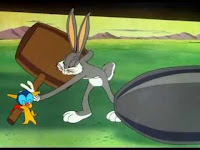 Falling Hare (Color, 1943, Robert Clampett)
That rascally wabbit finally gets what's coming to him when he goes from tormenter to tormented by a tiny little gremlin who is out to ruin the war effort.  A tiny little monster is out to detonate a bomb in an army airbase, and it's up to Bugs to stop him.

Of Thee I Sting (Color, 1946, Friz Freleng)
Movietone-style spoof narration is used in this tale of one man’s desperate stand against all odds. Mosquitoes go through an intense and very specific boot camp in this entertaining documentary send up of war effort newsreels of the day. Looney Tunes fans will thrill to Robert C. Bruce’s jaunty March of Time style narration. 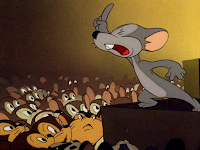 Fifth Column Mouse (Color, 1943, Friz Freleng)
An allegory for the axis powers; this cartoon pits a hungry cat against a group of rodents.  The cat tricks one of the mice that he is there to protect them as long as they appease him and serve him like a King.  When his true colors are shown, the mice storm onto the battlefront in a mechanical bulldog to even the score.

Chicken Little (Color, 1943)
Another allegory for the Nazis' rise to power, this twisted fable features Foxy Loxy utilizing Hitler's own philosophies of mind control to fetch himself a feast of fowl.  Originally, Foxy got his ideas from "Mein Kampf", but the studio switched the title of the book (but not the content) to read "Psychology".

The Grain That Built a Hemisphere (Color, 1943)
A different kind of propaganda short from Di$ney, this mini-doc on the importance of corn was made in conjunction with Canadian government. Tracing its roots from the communities of indigenous Americans to the insidious bi-product that invades almost every aspect of our daily lives, this short ends with a blitz of corn patriotism! 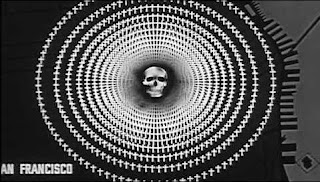 One World or None (B+W, 1946)
An animated warning against the threat of nuclear annihilation, featuring a stern and foreboding narrator.  Watch as San Francisco becomes a giant skull surrounded by the graves of our imaginary fallen.  This didactic piece of propaganda is pretty rich considering we're the only country that has ever dropped an atomic bomb on another country. 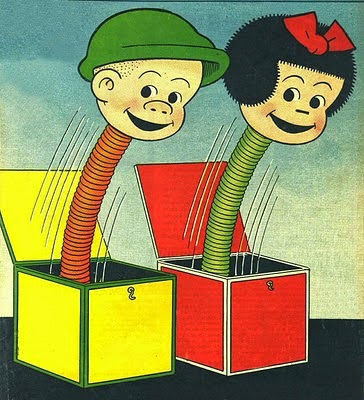 Nancy and Sluggo Doin’ Their Part (B+W, 1940s)
Our favorites from the funnies get down to the serious business of raising funds for the USO. Sluggo comes up with a suitably money-making schemes of all and all the gang joins in! 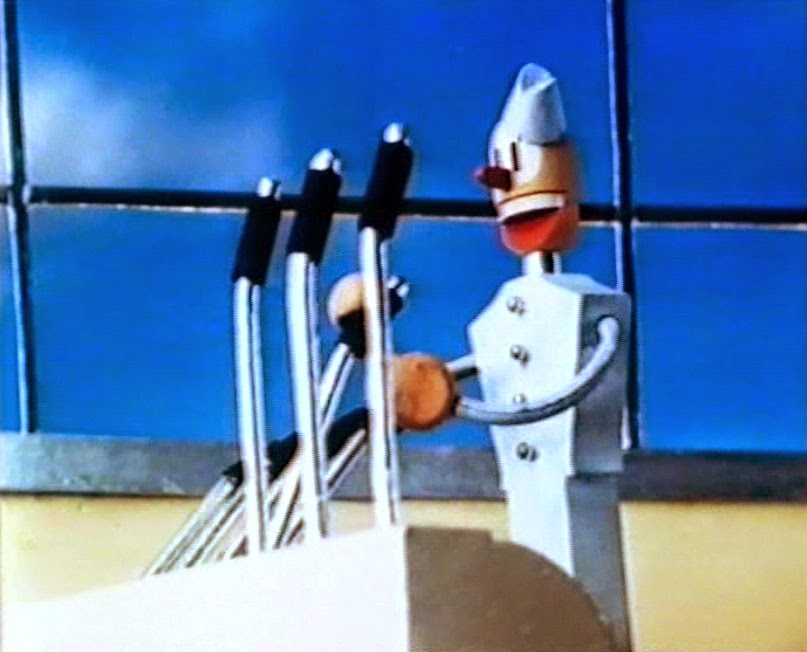 Sky Pirates (B+W, 1938, George Pal)
The Puppetoons take to the skies when a marauding band of air pirates begin dropping bombs.  An air battle ensues and the military must make the skies safe again.  Quirky and visually stunning, this short features Pal's hand-carved wooden puppets and some great aerial imagery and sight gags.  Made for Horlicks malted milk in Britain. 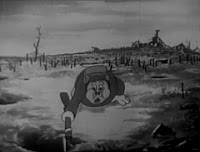 Boom Boom (B+W, 1936 Jack King)
A very early Porky Pig is a World War I doughboy along with Beans the Cat.  Animals sing "You're in the Army Now" to a frightened Porky who wishes he were back home on the farm.  Porky and another soldier rescue General Hardtack from the enemy and fly him through enemy lines. 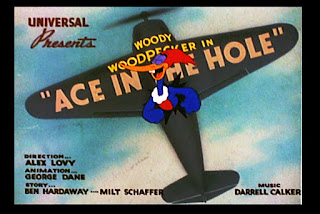 Ace in the Hole (1942, Alex Lovy)
Woody Woodpecker is at a military base and wants to fly an airplane.  After reading a textbook he pilots a PU-2.  Large bulldog acts as antagonist. 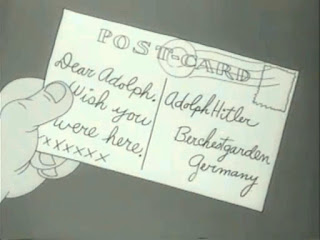