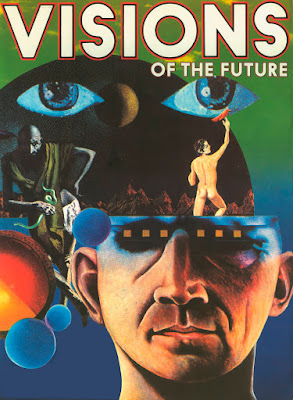 Oddball Films presents Futures Past: Vintage Visions of Tomorrow, a night of films from the 20th Century that attempt to envision and predict the future. From documentary to comedy, sci-fi, animation, experimental and more, this is a multi-genred night of futurism from the 1900s through the 1980s.  Walter Cronkite and the folks at CBS News look forward to domesticity in the 21st Century including paper furniture and 3D TVs in At Home 2001 (1967).  Georges Melies applies his patented movie magic to imagine the very first lunar mission in A Trip to the Moon (1902).  Mr. Fox is excited to come back to life after his cryogenic defrosting, until he sees what life is like as only a head in the satirical sci-fi short Welcome Back Mr. Fox (1986).  In case you were worried that the world has run out of innovation and invention, turn to Lowell Thomas who is happy to report that the wells of innovation have yet to run dry in Frontiers of the Future (1937).  Donald Fox's optically printed Omega (1970) foretells the end of the world through a series of stunning images dissolving into ethereally apocalyptic visions. In the stunning No. 00173 (1969), Polish director Jan Habarta creates a bleak dystopian factory momentarily brightened by one beautiful butterfly. Plus! A robot band from Focus on Automation: Pushbuttons and Problems (1940s), The School of the Future (1960s) and even more futuristic surprises! 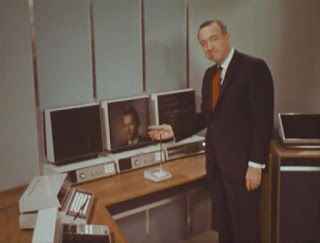 At Home 2001 (Color, 1967)
Walter Cronkite envisions the future for the home. An exploration of people’s lives and living conditions inspired the advancement of technology in the future, this jaw-dropping episode includes predictions for 3D TVs, paper furniture, robot butlers and more; some ridiculous and some eerily accurate. An episode of the 21st Century, a short-lived spin off of Cronkite's earlier news magazine The 20th Century.

A Trip to the Moon (B+W, 1902)
Georges Melies's fantastical early silent film depicting the then science-fiction concept of traveling to the moon.  As a group of explorers head out to the moon (after a send off by a gaggle of beauties), they find a bizarre and magical world of moon goddesses, overgrown fungi, and a community of hostile bug-like aliens.

Welcome Back Mr. Fox (Color, 1986)
A funny science fiction short set in the not-too-distant future. Mr. Fox, a movie producer, has just been resuscitated from a cryogenic freeze, only to find out that his future is not as he hoped it would be. He is only a head that must be attached and detached from a robot body. Directed by Walter Pitt. 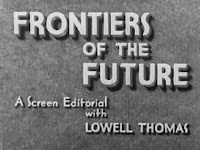 Frontiers of the Future (B+W, 1937)
Lowell Thomas hosts this campy piece of technological propaganda.  To quell fears that the well of American innovation has run dry, the film traces the pattern of modern industrial growth from 1844. It proceeds with a brief outline of the many inventions and discoveries since that time. The value of research in bringing new products in emphasized. Concludes with an effective presentation of the fact that new frontiers of progress lie in the laboratory. 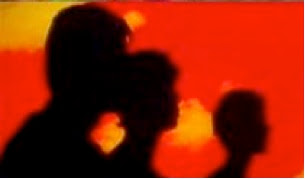 Omega (Color, 1970)
An optical poem by West Coast experimental filmmaker Donald Fox this is a dazzling, highly original non narrative, exhilaratingly beautiful film. OMEGA deals with the end of mankind on earth, prophesying man's liberation from his earthly bounds to roam the universe at will. By sending an energy ray to the sun and harnessing its solar power, man is able to make an evolutionary leap. The film can be used to explore the outer limits of the concepts of death, evolution the afterlife, and the future of mankind. Phew! A source film that over 40 years later still inspires.

Kat Shuchter is a graduate of UC Berkeley in Film Studies. She is a filmmaker, artist and esoteric film hoarder. She has helped program shows at the PFA, The Nuart and Cinefamily at the Silent Movie Theater and was crowned “Found Footage Queen” of Los Angeles, 2009. She has programmed over 150 shows at Oddball on everything from puberty primers to experimental animation.
About Oddball Films 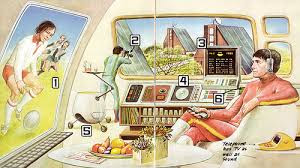 Oddball films is a stock footage company providing offbeat and unusual film footage for feature films like Milk, documentaries like The Black Panthers: Vanguard of the Revolution, Silicon Valley, Kurt Cobain: The Montage of Heck, television programs like Mythbusters, clips for Boing Boing and web projects around the world.
Our screenings are almost exclusively drawn from our collection of over 50,000 16mm prints of animation, commercials, educational films, feature films, movie trailers, medical, industrial military, news out-takes and every genre in between. We’re actively working to present rarely screened genres of cinema as well as avant-garde and ethno-cultural documentaries, which expand the boundaries of cinema. Oddball Films is the largest film archive in Northern California and one of the most unusual private collections in the US. We invite you to join us in our weekly offerings of offbeat cinema.
Email ThisBlogThis!Share to TwitterShare to FacebookShare to Pinterest
Newer Post Older Post Home