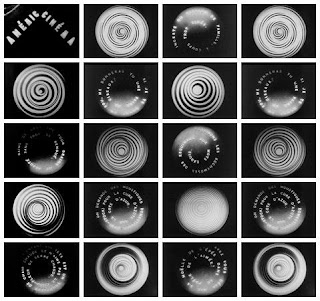 Anemic Cinema (B+W, 1926, Silent)
Directed by Marcel Duchamp
“I have forced myself to contradict myself in order to avoid conforming to my own taste.” -Marcel Duchamp


The only film to come from the founder of the Dadaism movement (artistic and literary movement from 1916-1923 “Anemic Cinema” is an abstract and annalistic film short containing rotating circles and spirals interlaced with spinning discs of words strung together in elaborate nonsensical French puns.

L’Etoile de Mer (B+W, 1928)
a.k.a. The Star of the Sea and The Starfish Directed and written by Man Ray.
Based on a poem by Robert Desnos. A classic of Surrealist cinema, Man Ray’s L’Etoile des Mer (Starfish) is a haunting, dreamlike ode to subconscious sexual desire, inspired by a poem from Robert Desnos and starring the iconic Kiki of Montparnasse.

Arabesque (Color, 1975)John Whitney‘s Arabesque, is considered by many to be the seminal computer film. Set to the music of Manoochelher Sadeghi, and created during a residency at IBM Whitney balanced science with aesthetics as he experimented with the eccentricities of Islamic architecture creating whirling, exotic flows of computer generated images. Arabesque was one of the first computer generated films that married technology and art is a focused, cinematic manner. Working with his early home-made computerized motion-control set-up, Whitney could produce a variety of innovative designs and metamorphoses of text and still images, which proved very successful in advertising and titling of commercial projects. He also did various commercial assignments including the title design for Hitchcock's feature Vertigo (in association with Saul Bass), and the preparation (in association with Charles Eames) of a seven-screen presentation for the Buckminster Fuller Dome in Moscow. 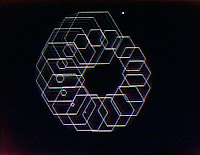 Binary Bit Patterns (Color, 1969) The spectacular, fast-paced film features quilt-like tapestries of polyhedral and crystalline figures pulsating and multiplying with a kind of universal logic eliciting a hypnotic, trancelike effect from the viewer. This film echoes a preoccupation with the mandala image and the interest in Eastern meditative philosophy that is seen in the work of the whole Whitney family. Employing computer generated imagery with optically introduced color and flicker effects, Michael Whitney creates a hypnotic, psych-folk audiovisual experience that suggests a secret symbiosis between the digital and the organic as various Persian inflected graphic permutations appear, dissolve and undergo metamorphoses on the screen. With original soundscore.

This film, by film pioneer James Whitney consists entirely of dot patterns. Like a single mandala moving within itself, the particles surge around each other in constant metamorphosis, a serene ecstasy of what Jung calls "individuation." For 10 minutes, a succession of beautiful designs grows incredibly, ever more intricate and astounding; sometimes the black background itself becomes the pattern, when paths are shunned by the moving dots. A voluptuous raga soundtrack by Ravi Shankar perfectly matches the film's flow, and helped to make LAPIS one of the most accessible "experimental films" ever made. The images were all created with handmade cels, and the rotation of more than one of these cels creates some of the movements. John Whitney Sr. had built a pioneer computerized animation set-up—the prototype for the motion-control systems that later made possible such special effects as the "Star Gate" sequence of 2001. James used that set-up to shoot some of his handmade artwork, since it could ensure accuracy of placement and incremental movement.

Tanka (Color, 1976)
"An extraordinary film."-Melinda Wortz, Art News
Tanka means, literally, a thing rolled up. David LeBrun’s Tanka is brilliantly powered by the insight that Tibetan religious paintings are intended to be perceived in constant movement rather than repose. The film, photographed from Tibetan scroll paintings of the sixteenth to nineteenth centuries, is a cyclical vision of ancient gods and demons, wild revels, raging fires and sea battles with monsters-an animated journey through the image world of the “Tibetan Book of the Dead”.  With an  original score by Ashish Khan (sarod), Buddy Arnold (saxophone, clarinet, flute), Pranesh Khan (tablas) and Francisco Lupica (percussion).

Trance and Dance in Bali (B+W,1937-39)
This ground-breaking film was produced by Gregory Bateson and Margaret Mead and records a performance of the Balinese ceremonial kris (dagger) dance-drama, which depicts the never-ending struggle between witch (death-dealing) and dragon (life-protecting), as it was given in the village of Pagoetan in the late 1930s. The dancers experience violent trance seizures, turn their krises against their breasts without injury, and are restored to consciousness with incense and holy water. Narrated by famed anthropologist Margaret Mead against a background of Balinese music. This “ecstatic ethnography” was an extraordinary effort to use film and photography in the field, and the precursor to much of the visual anthropology that has gone on
since then.

Glittering Song (Color, 1965, Vaclav Bedrich)
A beautifully whimsical and visually tantaizing object animation that brings to life discarded shards of broken glass, transforming the dangerous trash into a sparkling magical world of a little boy and his colorful imagination. From Kratky Film Praha. A huge hit at the Czech stop-motion show.

Spacy (Color, 1980-81, Takashi Ito)
His films are like a roller-coaster. His way of throwing the act of seeing into utter confusion is an attack on the eyes in their corporeal function, and to attack the eyes is to take on the body itself as your opponent. The film makes you break out in sweat only by shooting a safe, peaceful gymnasium in the dark-Koharu Kisaragi

Hypnotic avant-garde rarity by Japan’s celebrated avant-garde filmmaker Takashi Ito.  Ito’s stuttering camera wanders throughout a gymnasium and dives into images of various parts of the gym, only to breach the framed threshold and arrive right back where it started. With Spacy, Ito imagines an endless tunnel/loop of accelerated cinema, navigating the very idea of perspective and exploiting its propensity for illusions of both space and time.

Dream of the Wild Horses (Le songe des chevaux sauvages) (Color, 1962)
Directed by Denys Colomb de Daunant with innovative musical score by Jacques Lasri this cinematic poem which uses slow motion and soft focus camera to evoke the wild horses of the Camargue District of France, showing them as they roam on the beach running through walls of fire and water.  A remarkable film.

In this M.J. Winkler presentation, Pat Sullivan's cartoon creation Felix the Cat becomes a self-taught hypnotist and, after a series of adventures, uses his magnetic talent to mesmerize a runaway hippopotamus.


About Oddball FilmsOddball Films is a stock footage company providing offbeat and unusual film footage for feature films like Milk, documentaries like The Black Panthers: Vanguard of the Revolution, Silicon Valley, Kurt Cobain: The Montage of Heck, television programs like Mythbusters, clips for Boing Boing and web projects around the world.
Our screenings are almost exclusively drawn from our collection of over 50,000 16mm prints of animation, commercials, educational films, feature films, movie trailers, medical, industrial military, news out-takes and every genre in between. We’re actively working to present rarely screened genres of cinema as well as avant-garde and ethno-cultural documentaries, which expand the boundaries of cinema. Oddball Films is the largest film archive in Northern California and one of the most unusual private collections in the US. We invite you to join us in our weekly offerings of offbeat cinema.