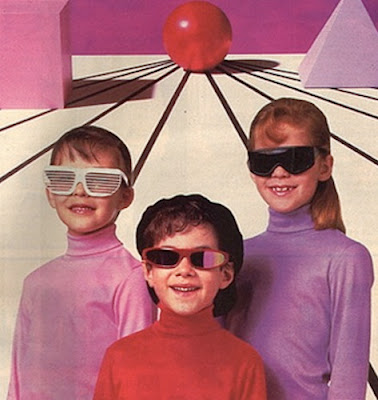 Oddball Films brings you Totally Strange 80's - Sex, Spandex, and Roller Skates. This bizarre and over-the-top evening features the oddest shorts of the 1980s, a decade known for its over-indulgence, bright colors, big hair, spandex and roller skates...roller skates! Get rappin' about fast food and vegetables in the gut-busting craptacular Fast Food: What's in it for You? (1988). Kids get creepy with grandma and her walkie-talkie-controlled robot when their picture book points out their body parts in Bellybuttons Are Navels (1985). Tag along with a couple of spandex-clad Calendar Control Officers in Calendar: How to Use It (1982). Step into a dream world of silver hair and a chorus line of dancing CPU units in the laughable computer primer Learning About Computers (1984). And, of course, we'll all learn to Roller Skate Safely (1981) with our matching neon spandex. Plus, Bill Plympton's surreal cartoon Your Face (1987), the itchy-kitschy Lice are not Nice (1985), a wacky animated Lego Sports Short (1986), and a whole decade's worth of great trailers, commercials and more snippets and surprises, with everything screened on 16mm. So, tease your bangs, grab your skates and roll on down to Oddball! Your Face (Color, 1987)
This film set the style and started career of famed animator Bill Plympton. One of the most popular short films ever made, it’s still showing all over the world. As a second- rate crooner sings about the beauties of his lover’s face, his own face metamorphosizes into the most surreal shapes and contortions imaginable. The music was written and sung by Maureen McElheron, then slowed to sound like a man’s voice because Plympton was too cheap to hire a male singer. Your Face earned an Academy Award nomination for Best Animated Short in 1988. 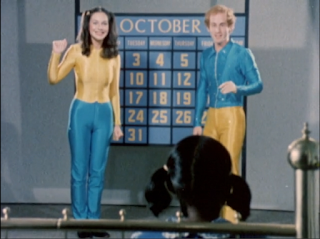 Calendar: How to Use It (Color, 1982)
Poor Karen shows up to Doug's door, wrapped present in hand, only to find out it's the day after his birthday party. She goes home and wistfully wishes, "If only I knew how to use a calendar." That's when the spandex-clad people in her wall calendar come alive and invite her into the "Calendar Control Center." There, they sing catchy educational songs about how tell one day from the next.

Bellybuttons are Navels (Color, 1985)
A boy and girl are playing in their room when Grandma peeks into the room and talks into a walkie talkie, which activates a toy robot telling the kids to go to bed. A little later, the kids meet grandma on the couch to read a story. They sit on the couch flipping through a picture book and get interactive. It all gets progressively more disturbing as the naked children in the book (who are taking a bath) begin to show each other their various body parts and the proper names. 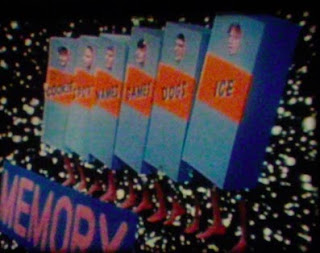 Roger has to write a report for school about computers, but he can't quite wrap his head around the workings of his Apple 2C.  That is, until he falls asleep and has a magical dream where his computer comes to life, turns his hair sparkling silver (you know, because it's a dream) and demonstrates the inner-workings of himself with women in CPU costumes dancing on a silicon bandstand.

Roller Skate Safely (Color, 1981)
All you need to know about the old 4-wheel roller skates, with lots of great footage from the Venice Beach boardwalk and trick sites.  Don’t miss the skate team in their early 80s matching outfits! 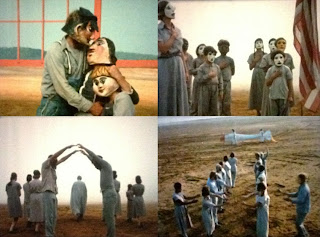 Button Button: A Dream of Nuclear War (Color, 1982)
Regional theater weirdness at its most atomic! Watch out for the bomb! Or is it: Watch out for the people in the giant papier mache masks and those guys on stilts? This head-scratching new age spectacular presents a shortened version of an hour long pageant/play presented by the residents of Strafford, Vermont, combining myth and fantasy to convey the meaning of nuclear war. Featuring mimes, narration, stilt-walkers and folk music effectively blended into a baffling anti-nuclear war statement.


Curator’s Biography
Kat Shuchter is a graduate of UC Berkeley in Film Studies. She is a filmmaker, artist and esoteric film hoarder. She has helped program shows at the PFA, The Nuart and Cinefamily at the Silent Movie Theater and was crowned “Found Footage Queen” of Los Angeles, 2009. She has programmed over 200 shows at Oddball on everything from puberty primers to experimental animation. 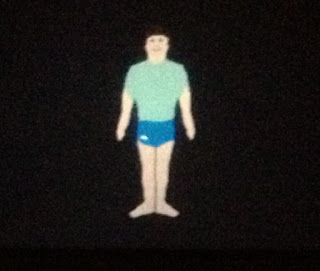