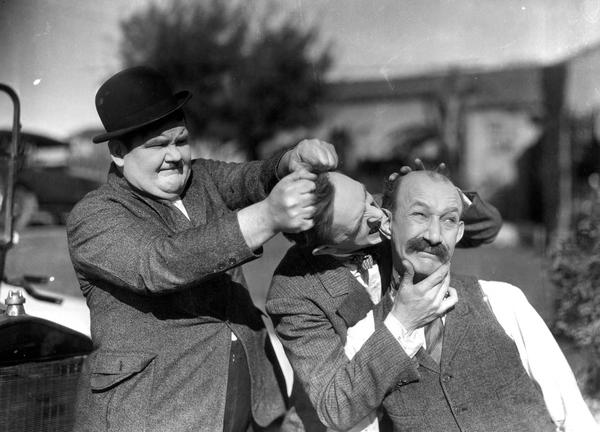 Oddball Films and guest curator Lynn Cursaro present Merriment, Mayhem and Moviedom: A Jolly Filmic Folly.  It's a festive grab bag of colorful ephemera, cartoons and silent slapstick with just a pinch of the season. The yule mood is more impish than elf-like in Big Business (1929), a Laurel and Hardy classic of Christmas trees and cinematic gold. The spoof is on in Renee Taylor’s borscht-belt send off to Fellini, Two (1970). Stop-motion pioneer Wladyslaw Starewicz’s charmingly buggy The Cameraman’s Revenge turned 100 this year, so it’s time you saw it! Oscar-winning Frank Film (1973) weaves magazine cut-outs into a mid-century portrait of American plenty. Christmas is often synonymous for toys and Charles and Ray Eames’s beautiful and mesmerizing Tops, (1969) spins them to perfection. Two Warner's cartoons supply the surrealist edge: Hopalong Casualty (1960) with a new take on the age-old tale of a creative and hapless coyote, and Porky Pig dips into the Dali in Dough for the Do-Do (1949). For the early birds, Stop, Look and Listen (1970) is a madcap stop-motion examination of carless car culture. Plus! More ephemeral gems and gingerbread lions and other complimentary home-baked treats for all!
Date: Thursday, December 20, 2012 at 8:00PM.
Venue: Oddball Films, 275 Capp Street, San Francisco
Admission: $10.00, Limited Seating
RSVP to: 415-558-8117 or programming@oddballfilm.com

The Cameraman’s Revenge (Wladyslaw Starewicz, tinted B+W, 1912)
Meet Mr. and Mrs. Beetle! They live a quiet life of married bliss . . . or do they? This saucy tale of creepy crawlies and their adventures in the shadows of hanky panky is by turns tart and kooky, perfect for bugged out cinephiles of all ages.

Big Business (Leo McCarey, James W. Horne, B+W, 1929 )
Another fine mess! On their road to riches, Laurel and Hardy give door-to-door Christmas tree selling a try. A simple misunderstanding with a grumpy homeowner (the great James Finlayson) escalates from petty vandalism into full scale mutual destruction faster than you can say Douglas fir and spite becomes a thing of almost riotous, headlight-smashing beauty. One of great silent shorts from “The Boys".

Tops (Charles and Ray Eames, Color, 1969)
An Eames favorite! Whether set into motion by the twist of the fingers or the pull of a string, these colorful tops are even more beautiful seen through the eyes of Charles and Ray Eames. The stunning variety of playthings gathered for this dynamic study is almost as dizzying as the whirling toys themselves. Legendary film-composer Elmer Bernstein, a frequent Eames collaborator, spins the musical spell.

Two (Renee Taylor, Color, 1971)
A delicious send up of your art house favorites by way the Borscht Belt! A glamorous pair of Fellini rejects find themselves on an empty beach and become tangled in an absurd frenzy of neurotic passion and brutal debasement! In perfectly awful Italian and Yiddish with subtitled in English. Written by and starring Reneé Taylor (nominated for an Oscar for Lovers and Other Strangers)

Frank Film (Frank and Caroline Mouris, Color, 1973)
A rich, multilayered portrait of the boom years by Frank and Caroline Mouris. Thousands of magazine images intertwine with two soundtracks -- one, a listing of words beginning with "F" and the other relating the co-director's biography -- to tell the story of the post-war generation. What might have once been seen as a witty critique of consumer aspirations, over time Frank Film has become imbued with a sunny optimism for today's viewers. This short but vital work garnered an Academy Award and a spot on the National Film Registry of the Library of Congress in 1996. And, what's more: it's just plain gorgeous!

Hopalong Casualty  (Chuck Jones, Color, 1960)
1960 and Wile E. Coyote is still after Road Runner! The gags are a delightful mix of the same old failed methods and a few fresh, promising mail-order schemes, even 11 years into this wildly popular series. Earthquake pills and a festively monstrous gift-wrapping are among the Acme Corporation’s offerings in this “faultless” toon.
Dough for the Do-Do (Robert Clampett, Color, 1949)
The gang remade 1938’s Porky in Wackyland, this time in full color to make those Dali references really pop! Everyone’s favorite pig travels to the “Dark Continent” to snag a rare (and nutso!) bird to claim a 4 sextillion dollar reward! Will the melty watches, 3-head Moe, Larry and Curly Monster and the other exotic creatures get in his way?

Stop, Look and Listen (Color, 1970)
A madcap stop-motion examination of what car culture might look like if it was done without the secure turtle shell of an automobile.

About the Curator
Lynn Cursaro is a local film blogger. Over the past two decades, she has worked in research and administrative positions a variety of Bay Area film organizations. The monthly picture puzzle on the Castro Theatre’s calendar is of her devising.
Email ThisBlogThis!Share to TwitterShare to FacebookShare to Pinterest
Newer Post Older Post Home