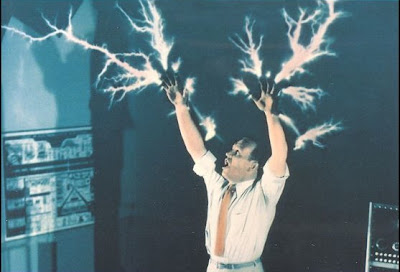 Oddball Films brings you Psycho Science from the Moody Institute, a mind-boggling collection of 1950s crackpot science films brought to you by the world’s strangest bible science film producers, The Moody Institute of Science.  The Moody Institute of Science, founded under the auspices of the Moody Bible Institute, an evangelical group started by Irwin Moon in San Francisco in 1938, produced a number of religious cult science films that were intended to demonstrate intelligent design through scientific experiments. These were marketed to schools and churches across the United States and their biblical subtext hit the viewer over the head with the proverbial hammer of faith. Evangelist Irwin “The Million Volt Man” Moon stars in many  of these eye-popping classroom science films as he inhales helium, runs electricity through his body, makes metal float in space, experiments with electric eels and preaches god’s creationist “intelligent design” ideology.  Tonight’s program features a sample of some of the quirkiest gems from the Oddball Moody Science collection. Films include Freedom in Flight (1972), Carnivorous Plants (1955), Facts of Faith (1956), Sense Perception (1960), Mystery of Time (1957), Blind as a Bat (1956)and The Electric Eel (1954). 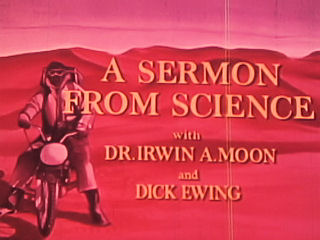 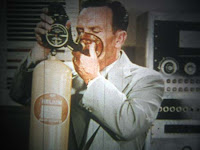 Freedom in Flight (Color, 1972)
Man’s Law or Natural Law? This thinly veiled promotion of aviation rules compares the rules of man to the laws of god. Flying a Beechcraft Twin Bonanza plane around the world Irwin Moon and son guide us through macabre audio of a pilot losing direction in mid air and crashing, a surreally blindfolded gymnast totally losing his sense of direction in an equilibrium experiment, an interview with astronaut John Glenn and the mysterious story of  the Lady Be Good, the WWII bomber lost in the Libyan desert. The inevitable end sums up the film’s point of view as Moon honks: “It is only because of these laws, both man made and god given and because of man’s submission to them that he has been able to make meaningful progress in his search for true freedom both in the air and in his personal life.” 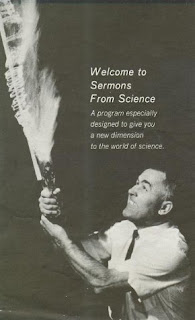 Sense Perception  (Color, 1960)
Moon demonstrates upside down glasses (which he wears for two weeks) and other perceptual experiments in this wacko-science film replete with a mini-sermon at the end. A mind-blower.

Carnivorous Plants (Color, 1955)
In this film about carnivorous plants, we’ll see how brilliant God was in forming such perfect traps, far better than any traps man has come up with. How did it happen? Oh, someday we’ll know…

Blind as a Bat (Color, 1956)
The Moody Science bat truck goes on location to study the secrets of bat navigation. Their in-house mammal abuse experiments show us the science of bat radar. An Oddball screening favorite. 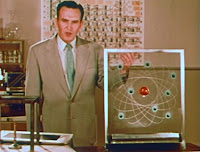 The Electric Eel (Color, 1954)
Irwin Moon shows us the electric eel and demonstrates its amazing abilities to shock fish for food and to use "radar" to find them. Don’t miss the scene where he illuminates a florescent light tube using his eel then jolts his staff!
About the Moody Institute 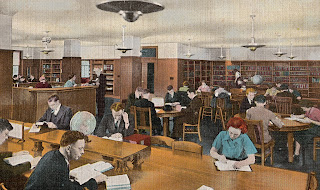 Dr. Irwin Moon got his start In 1938 when he began traveling as a full-time as evangelist demonstrating his “Sermons From Science” under the auspices of The Moody Bible Institute. The next year, with the help of businessmen from San Francisco, a SFS pavilion was built at the 1939 San Francisco World's Fair. For nine months, Moon presented up to eight demonstrations each day, seven days a week. The crowds were so large that demonstrations began hours prior to the scheduled time because early arrivals had filled the auditorium while others waited outside. With more than two tons of equipment, most of it homemade, Moon performed such wonders as frying an egg on a cold stove, lighting a bulb on his bare fingers, and allowing one million volts of electricity to smash through his body. Following the presentation he asked, "Can you believe these miracles are the result of chance or accident? Or are they part of a divine pattern?" 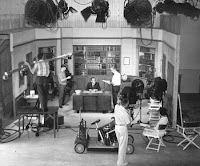 In 1945 The Moody Institute of Science was founded with a two-pronged evangelistic approach incorporating films and live demonstrations. Operating on a shoestring budget, The Moody Institute of Science staff would remodel war surplus material and invent and build the equipment to perform live demonstrations and produce films. More than 6 million people have seen their live demonstrations at the 1939 San Francisco World's Fair, the 1964-65 New York World's Fair, the 1967 Montreal World's Fair and many more fairs and expositions. Their classroom science films were marketed to schools and churches across the United States and their biblical subtext hit the viewer over the head with the proverbial hammer of faith, far predating today’s “debate” over “intelligent design”.