The Hellstrom Chronicle and other Junk Science - Thurs. Dec 6 - 8PM 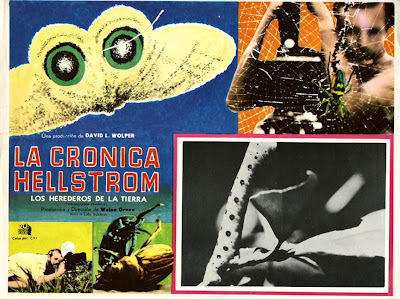 Oddball Films presents The Hellstrom Chronicle and other Junk Science, a night of subjective science films that stretch the definition of documentary. The centerpiece of the night, The Hellstrom Chronicle (1971) is one of the strangest recipients of the Academy Award for Best Documentary due to its obtuse facts and florid doomsday message.  The film utilizes mesmerizing microcinematography of insects juxtaposed with narration from our host Nils Hellstrom, a fictional mad scientist who poetically reveals that insects stand to take over the world and laugh on the collective grave of the human race.  Part documentary, part horror film, part apocalyptic prophecy, The Hellstrom Chronicle is the dark, foreboding step-mother of Microcosmos.  The film was produced and conceived by David L. Wolper, producer of such far-reaching productions as Roots, The Thorn Birds, Willy Wonka and the Chocolate Factory and Wattstax, penned by Omen scribe David Seltzer and features a fabulous synthy score by master-composer Lalo Schifrin.  Campy, creepy, provocative and hypnotizing, The Hellstrom Chronicle has got it all! Paired with this beautifully prophetic mockumentary are two 1950s crackpot science films brought to you by the world’s strangest bible science film producers, The Moody Institute of Science.  Evangelist Erwin “The Million Volt Man” Moon shocks his crew to demonstrate God's design in The Electric Eel (1954) and goes on to manipulate a couple of furry tree clingers in Slow as a Sloth (1954).  It is an evening that explores if science can remain science when you take it personal.

The Hellstrom Chronicle (Color, 1971)
This strange, dark satiric pseudo-documentary about the end of the human race and  the beauty and adaptability of insects may not have the credibility of a National Geographic film, but its subjectivity doesn't make it any less fascinating, or even plausible and certainly makes it more entertaining and provocative.   The film intersperses incredible microcinematography that illuminates the grotesquely beautiful life of insects with a journey through man's failings led by fictitious scientist Nils Hellstrom, played to the hilt by Lawrence Pressman.  While highlighting insects' adaptability and longevity on the planet, Hellstrom paints a picture of the annihilation of man and the reclamation of the Earth by our six-legged enemies. 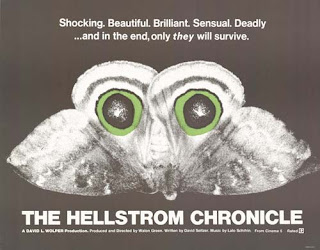 Though based in some scientific fact, the heavy-handed narrative strays from  objectivity as it unfolds as decidedly Science Fiction.  We begin to see Hellstrom's bias in the first line voiced-over images of volcanic eruptions: “The world was created not with the sweetness of love, but with the violence of rape.”  And the apocalyptic poem begins from there, and continues with an endless stream of lines like "specters as limitless as the imagination of the insane."  Which is not to say there isn't some basis in real science.  There are several institutions cited in the credits listed as consultants and a few kernels of real entomological and anthropological facts, but the overriding feeling of pretentious subjectivity transforms it into a kind of horror film for scientists and conservationists.

The insects are truly awe-inspiring, especially when filmed in slow-motion, and truly hair-raising when African driver-ants are swarming in alarming numbers to eat a monitor lizard.  There's an intimacy with these creepy-crawlers that holds its own merit even in the face of Hellstrom throwing bugs around a grocery store and hosing down a hornet's nest. It is not as if this kind of manipulation hasn't been used in more prestigious documentaries for years, it is just more blatant.  Robert Flaherty sacrificed baby seals for the sake of "documentation" in  Nanook of the North and musical scores of children's choirs seem to run rampant in most modern nature documentaries, to sway the viewer into a heightened sense of awe.  We must also forgive the use of a fake scientist for a host - for after all Sigourney Weaver is no biologist, but we accept her narration as fact in Planet Earth.  Whether credible or not, Hellstrom is a must see! 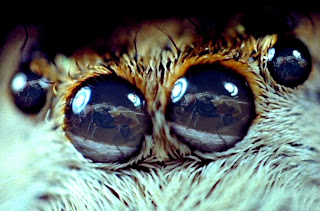 
With a Double Dose of the Evangelical Science Organization, The Moody Institute of Science! 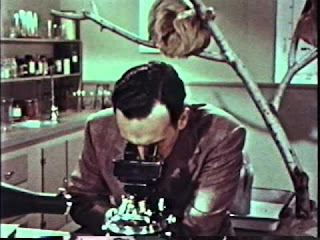 The Moody Institute of Science, founded under the auspices of the Moody Bible Institute, an evangelical group started by Erwin Moon in San Francisco in 1938, produced a number of religious cult science films that were intended to demonstrate intelligent design through scientific experiments. These were marketed to schools and churches across the United States and their biblical subtext hit the viewer over the head with the proverbial hammer of faith.  Evangelist Erwin “The Million Volt Man” Moon stars in many  of these eye-popping classroom science films as he inhales helium, runs electricity through his body, makes metal float in space, experiments with electric eels and preaches god’s creationist “intelligent design” ideology. 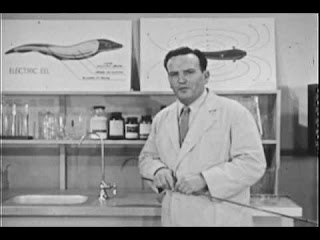 The Electric Eel (1954, Color)
Dr. Irwin Moon - part showman, part scientist, part crackpot religious nutcase shows us the electric eel and demonstrates its amazing abilities to shock fish for food and to use "radar" to find them. Don’t miss the scene where he illuminates a florescent light tube using his eel then jolts his staff with electrodes attached to the deadly fish!

Slow as a Sloth (1954, Color)Moon presents different breeds of sloths with the help of his lab-coated assistant.  The duo explain interesting facts about sloths and attempt to elicit reactions from the animals by petting their fur the wrong direction, poking them with sticks and other "scientific" methods.
Email ThisBlogThis!Share to TwitterShare to FacebookShare to Pinterest
Newer Post Older Post Home